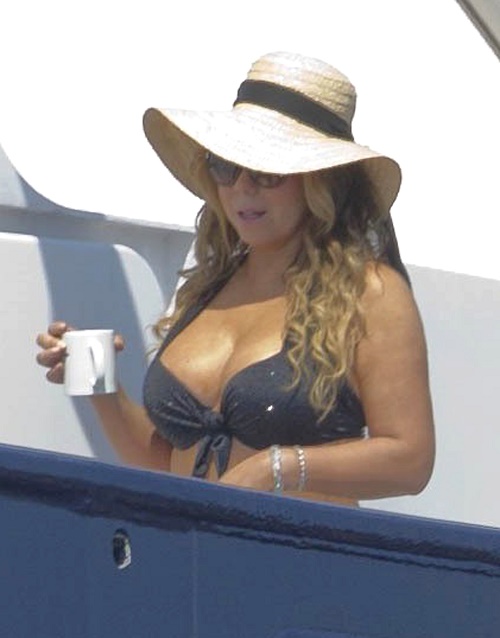 Mariah Carey wants to marry her billionaire boyfriend James Packer ASAP. There is only one thing standing in her way – she is still married to hubby Nick Cannon and their divorce isn’t final. Mariah Carey has always had a tendency to rush relationships, and her divorce from Nick Cannon is a perfect example of what happens when you marry someone you have known for a month – but the diva didn’t seem to learn her lesson and is ready to say “I Do” to her new boyfriend James Packer.

According to the July 27 edition of GLOBE Magazine, Mariah Carey and James Packer plan to elope and have a spur of the moment wedding as soon as her divorce from Nick Cannon is settled. An insider dished to GLOBE Magazine, “She is pushing Nick to settle the financial terms and custody of their twins as soon as possible. Mariah is head over heels for James and she is ready to elope as soon as the ink is dry on her divorce settlement.”

Mariah Carey is a millionaire, but her net worth is nothing compared to James Packer’s – and the singer is reportedly smitten by his wealth and power. The inside source went on to explain, “It has been a whirlwind of love, luxury, and being spoiled to the max. There is no way she is going to let him get away.” It sounds like Mariah Carey might be a bit of a gold-digger, which truly is ironic because while she was married to Nick Cannon rumor has it she was the one supporting her husband and he was the gold-digger. So, it’s not surprising that she is loving being spoiled for once instead of being the one doing the spoiling.

Do you think that Mariah Carey is rushing her relationship with James Packer? Is a shotgun wedding for the couple just a disaster waiting to happen? Could Nick Cannon be stalling on purpose because he doesn’t want Mariah to marry the billionaire? Let us know what you think in the comments below!