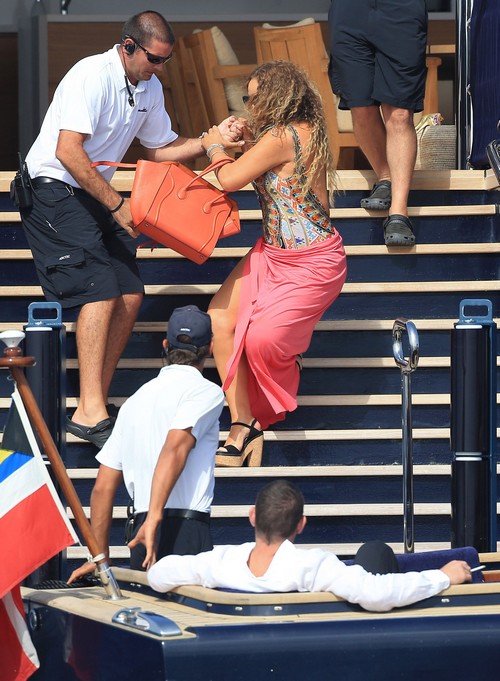 Mariah Carey’s new billionaire boyfriend James Parker seems to have the songstress smitten – but her ex-hubby Nick Cannon is not a fan of his. Rumors that Mariah was dating James began popping up on the internet a few weeks ago, but they were confirmed when Mariah and James traveled to the Italian Island of Capri for a romantic getaway – with her twins Monroe and Moroccan in tow. Nick Cannon apparently flipped a lid when the photos of James splashing around on the beach with his kids hit the internet.

Nick Cannon is totally over Mariah Carey and he could care less who she dates – but he is furious that she is playing house with the twins and her new boyfriend, and Nick hasn’t even met the guy that. On top of that, the things that Nick does know about James aren’t exactly good and are a far cry from step-father material.

The July 6 edition of Life & Style Magazine reveals, “Nick doesn’t care if you are a billionaire or a busboy, he doesn’t want his kids around a guy that he hasn’t met yet. But, Nick has HEARD plenty about James, who was once a member of the Church of Scientology, ditched his wife (then had a fling with Miranda Kerr), and got in a street brawl with his friend last year.” Nick thinks that James’ temper is a cause for concern.” Life & Style’s inside source goes on to say, “It is an understatement to say that Nick is pissed off right now.”

Mariah Carey and Nick Cannon’s divorce seemed overall pretty drama-free, but it sounds like there could be a huge custody battle in their near future. Do you think that Nick has a right to pick and choose who Mariah brings around the twins? Or is he just bitter that Mariah has moved on and has a new boyfriend? Let us know what you think in the comments below!