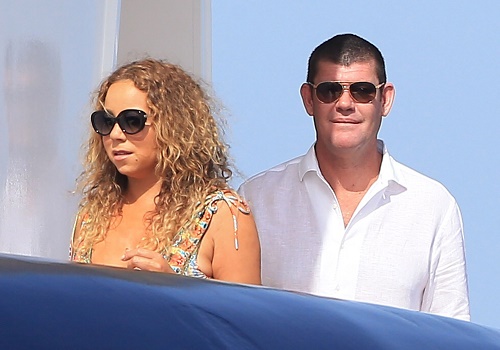 Is Mariah Carey getting married again? Mariah Carey recently stepped out with her new boyfriend of two whole weeks, James Packer, and the couple PDA’d all over the Italian island of Capri. But Mariah’s new billionaire boyfriend has a checkered past, and her pals fear that she is moving too quickly and is going to do something crazy – like marry him! It sounds absurd to even think that Mariah would marry a man that she has known for two weeks, but considering her bizarre behavior in the past and the fact that she did the same thing with her ex Nick Cannon, it is a real possibility!

The July 13 edition of Star Magazine reveals that Mariah’s pals are in panic mode over her new relationship, and they are begging the singer to slow down. An insider dished to Star, “Mariah’s friends think that she has lost her mind. She is not even officially divorced yet from her last husband Nick Cannon! Mariah already has her two kids calling him Uncle James. It’s all kind of weird…and happening so fast that her closest pals are trying to talk some sense in to her and slow her down. Mariah married Nick barely weeks in to their relationship, and now it looks like she might make the same mistake with James.”

Mariah’s friends have cause for concern though. Mariah has always been a bit…fragile, and easily manipulated. Her new boyfriend James Packer has close ties to the controversial religion Scientology. If Mariah gets sucked into the religion, no one will be able to get her out. Not to mention, James has a reputation of being a bit of a hot head, and was even arrested after getting into a public fight in the middle of the street.

Do you think that Mariah will marry James Packer after dating him for a few weeks? Or will her friends be able to talk some sense in to her before it is too late? Let us know what you think in the comments below!