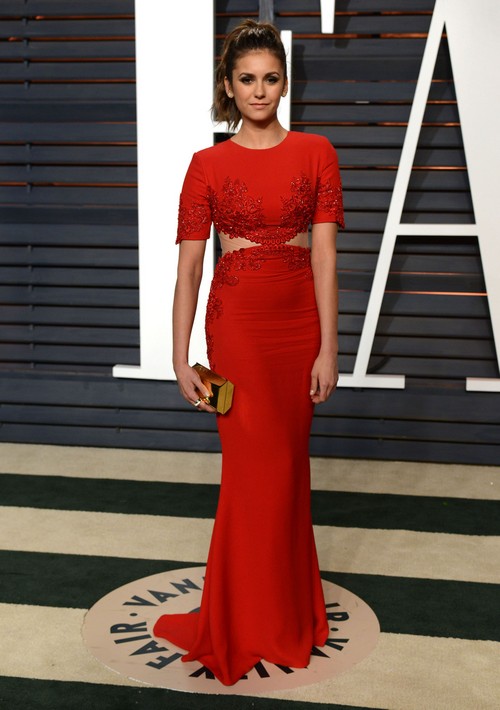 Nina Dobrev has been on The Vampire Diaries for a few years now, enough to establish a solid fan base and equally solid B-list cred. Nobody would call Nina an A-list TV actress, but she does command the same type of media attention and focus that A-list TV actors do, if only because her romantic life is such a topic of hot interest. However, think back to two years ago, when Nina was in a steady relationship with Ian Somerhalder and not dating anybody else – do you remember anyone expressing nearly this much interest in her life?

Hollywood has a thing about single actors versus married actors – sure, if you’re Channing Tatum, go get married and nobody will care. But for the majority of actors – and even people like Brad Pitt – it makes a difference when you’re starting out. If your career is built on your looks [even in part], then the pressure will be on for you to ‘appear’ single – if only to mollify your countless fans into thinking that they somehow have a chance with you. I mean, let’s be real – most Vampire Diaries fans don’t really care about dating Nina Dobrev, since they’re female teenagers. However, Nina is trying to launch a film career now, and that caters to a broad, broad demographic – at least half of whom equal men. That means that Nina can attempt to kickstart a film career all she wants, but the fact that she’s single right now is helping her enormously.

Nina Dobrev is still technically contracted to at least a few more seasons of the Vampire Diaries [including this one], but we already know she’s planning on quitting soon to escape the stigma of Ian Somerhalder’s association [and Nikki Reed]. But she’s playing it safe and waiting until she lands a franchise first. Just don’t be surprised if she remains single until then…

What do you guys think about Nina Dobrev quitting Vampire Diaries, and that being dependent on her dating life? Let us know your thoughts in the comments below.