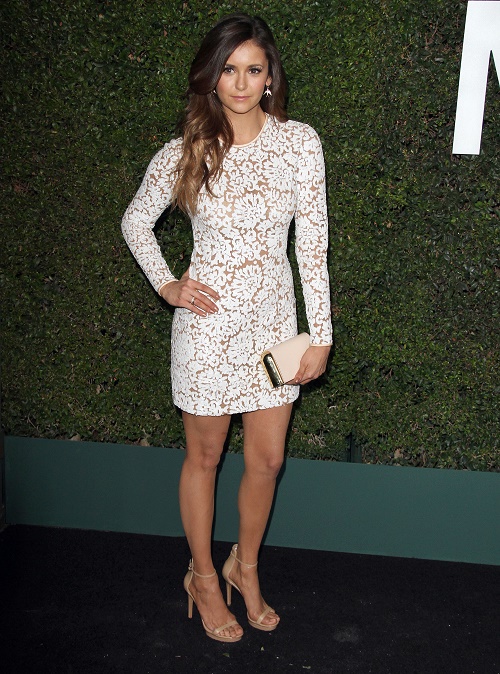 Ian Somerhalder is engaged to Nikki Reed, but that doesn’t mean that was his first choice in the matter – he might’ve wanted to tie the knot with Nina Dobrev! According to rumor [completely unsubstantiated, mind you], Ian Somerhalder actually first proposed to Nina Dobrev after dating for a few years, but she turned him down. Granted, Nina is only 26 years old and she has her entire career ahead of her, and she probably [rightly] assumed that getting married, starting a family, and settling down would slow her down. Not to mention that Hollywood definitely prefers single young women to the married kind.

And Ian, being 36 years old, wants all those things – marriage, babies, family – now. Our sources tell us that even though Ian and Nina stayed together after she turned down his proposal, things remained strained between the couple after that, and eventually they broke up. Plus, it’s also possible that Ian actually cheated on Nina after she turned down his proposal, since he didn’t think that the relationship would end up going anywhere.

Thus, considering the way they ended things, it makes sense that Nina and Ian still have some lingering feelings and unresolved tension between them, right? After remaining distant and awkward for the longest time, rumor has it that both Nina Dobrev and Ian Somerhalder have slowly started to get closer and more intimate on the set of The Vampire Diaries. Of course, that’s terrible news for Nikki Reed, who was already jealous about Nina’s proximity to Ian.

But if we’re being completely, brutally honest, it seems like Ian would dump Nikki in a New York minute if Nina asked him to come back – and ESPECIALLY if she promised him an engagement. But is Nina actually planning to ‘steal’ Ian back from Nikki and ruin her rival’s engagement? That’s a question you guys will have to answer.

What do you think? Let us know your thoughts in the comments below.