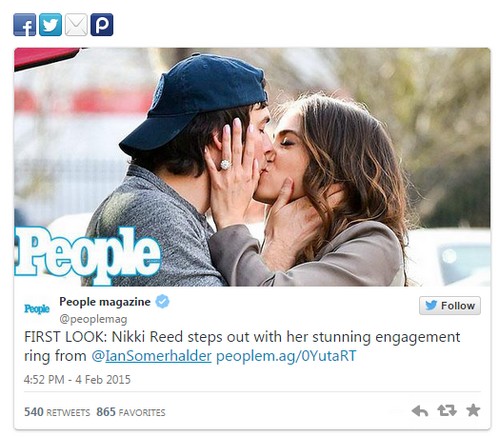 Nina Dobrev might destroy Ian Somerhalder and Nikki Reed’s engagement just by flirting with her ex on The Vampire Diaries set and so Nikki has asked Ian to quit the hit show. Nikki Reed and Ian Somerhalder are currently engaged but that unfortunately doesn’t mean that Ian can retire from The Vampire Diaries. Indirectly, that means that Ian will have to continue making out with and being intimate with his ex-girlfriend, Nina Dobrev – regardless of his engagement status. Of course, that wouldn’t be an issue, but we’re hearing from sources that Nikki Reed is getting increasingly jealous of Ian’s proximity to Nina, and has actually asked him to quit The Vampire Diaries.

For the longest time, it was rumored that Ian Somerhalder and Nina Dobrev hated each other, couldn’t stand being around each other, and didn’t want to work together anymore. In fact, scenes for the current season of The Vampire Diaries were specifically written to keep Nina’s and Ian’s characters apart, eliminating the need for any intimate or ‘sexy’ scenes between them. But recently, on-set sources have been claiming that Nina and Ian have been getting very close and ‘touchy feely’, despite the fact that Ian is engaged to Nikki Reed and Nina is linked to several different men.

Some sources are even saying that a reunion between Ian and Nina isn’t out of the realm of possibility, and all of this [rightly] has Nikki very worried – and jealous. In fact, she’s reportedly so jealous that she’s even asked Ian to quit The Vampire Diaries, just so that he won’t have to work in close proximity to Nina anymore.

What do you guys think? Is Nikki Reed getting so jealous that she’d ask her fiance to quit his steady paycheck and claim to fame? Should she be worried about Ian and Nina at all? It’s possible that all of this is being drummed up to promote the show, but the simple fact is that The Vampire Diaries has been renewed for a seventh season – which means that Ian Somerhalder and Nina Dobrev are going to be spending that much more time together.