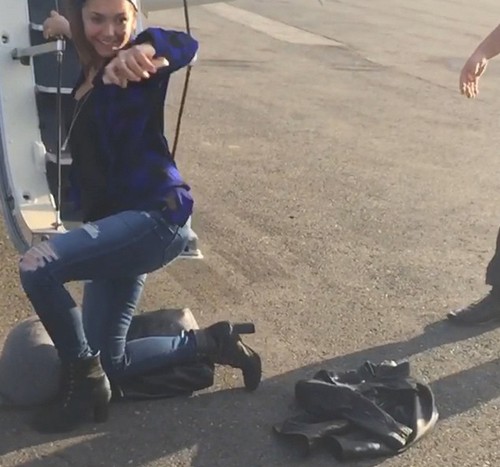 Nikki Reed is worried about Ian Somerhalder and Nina Dobrev getting back together and ruining her engagement to the Vampire Diaries’ stud. Is Nina Dobrev dating Chris Wood, Nikki Reed hopes so! The two were reportedly at the Super Bowl at the same time, even though sources denied claims that they partied together. However, even though they didn’t post social media pictures together, that doesn’t mean that they didn’t party together – in fact, it doesn’t mean anything. Both Nina Dobrev and Chris Wood have been active enough on social media for the past few months, and the rumor mill started after they both started posting pictures together on Twitter and Instagram.

We could look at this in two different ways – either Nina Dobrev is dating Chris Wood, and she wants the whole world to know.. or she’s just using Chris and the excessive PDA to make Ian Somerhalder jealous.

Of course, Nina is also in the news for other reasons – she was video’d taking a huge tumble off a private plan. Clumsy in love? Oh, we kid, we kid. But seriously, the girl’s love life has us so confused, which is probably how she likes it. She’s one of the hottest up-and-coming actresses in Hollywood right now, and her tumultuous [or at least, it seems that way] love life definitely reflects her place in Hollywood.

Now, the only question is who she’s actually dating – her hot Vampire Diaries co-star Chris Wood? Her ex-boyfriend and currently engaged on-again/off-again nemesis, Ian Somerhalder? Or Foster the People’s Mark Foster, which was also rumored a while back?

What do you guys think? Is Nina Dobrev dating Chris Wood or someone else? Is she manufacturing her dating life to make Ian and/or someone else jealous? Is Nikki Reed relieved that Nina might now keep her paws of Ian?  Is Nina just having fun [equally as possible]? Or is she just being friendly to all these men, and the media is making a big deal out of nothing? Let us know your thoughts in the comments below.