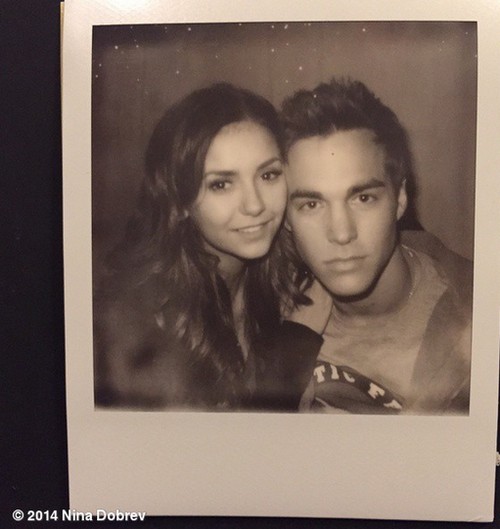 Nina Dobrev has a new boyfriend… or does she? Although we’d literally just been discussing Nina Dobrev’s relationship with Foster the People’s Mark Foster, Nina has been posting pictures on her Instagram of her hot new co-star, Chris Wood. The pictures on her Instagram would definitely lend one to believe that she and Chris are hooking up, if not straight up dating – there are even rumors that Nina and Chris have been spotted kissing and whatnot while working on The Vampire Diaries together.

It just seems like all these rumors are just so… convenient no? Nina Dobrev and Mark Foster gossip gets louder and louder, and suddenly Nina has a hot new boyfriend that just happens to be her co-star? Please, our cynical brains can’t process that without suspecting something.

Honestly, what we’re hearing – and what we still firmly believe – is that Nina is still dating Mark Foster, but she’s using Instagram to throw people off the trail. She doesn’t want to straight up come out with a public statement saying that she’s not dating Mark Foster – one because that would mean actively trying to stop the gossip, which is the last thing she wants, and two because it’s not true and she would be lying. However, using her Instagram and other social media accounts to send her message is something that she’s done before, and won’t hesitate to use again. Even if Nina Dobrev and Chris Wood are very, very close, our sources are standing firm and claiming that they’re not dating. It’s all just a smokescreen to hide the fact that Nina is dating Mark, and they’re not yet ready to go public and face the intensity of the public’s scrutiny.

What do you guys think? Have you decided who Nina Dobrev’s boyfriend is? Let us know your thoughts in the comments below.