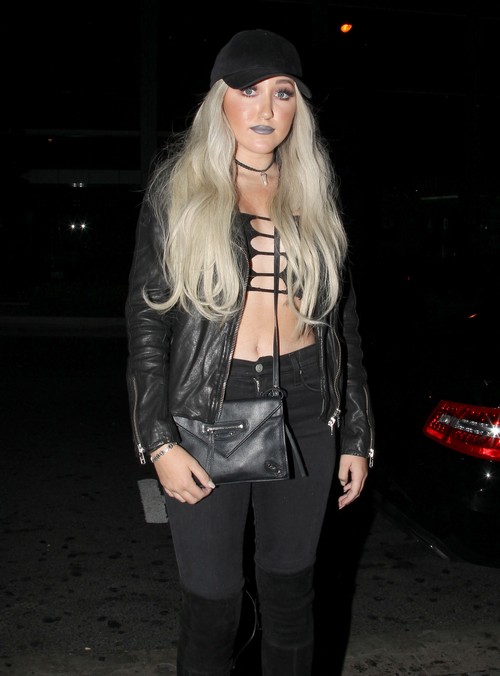 This week’s edition of Star Magazine reveals that Miley’s wild-child little sister is going to wind up giving her a run for her money. Most girls Noah Cyrus’ age are counting down the days until they are old enough to get their driving permits, and trying to decide what to wear to their sophomore dances. But, instead Noah is allegedly out tearing it up with her pal Kylie Jenner at one of Hollywood’s most notorious nightclubs – Bootsy Bellows. And, she obviously has taken some fashion cues from her big sis – her outfit did not leave much to the imagination.

Insiders spilled in this week’s edition of Star Magazine that Noah’s parents Tish and Billy Ray Cyrus actually encourage her behavior – they think it will help make her worth as much money as her sister Miley if she behaves badly. The source explained, “Miley’s antics have only fueled her fame, so Billy Ray is letting Noah do as she pleases. Noah is underage and can be easily influenced by older party girls. She needs a positive influence in her life and she can’t seem to rely on her family.”

Is there any hope for Noah Cyrus? Seriously, if she is already behaving like her big sister Miley and she is only 15 – imagine what she will be like when she is 21 years old and actually of legal drinking age. Should someone step in and interfere, is Noah in trouble? Let us know what you think in the comments below!

Kylie Jenner celebrates her 18th birthday with family and friends including Noah Cyrus on August 9, 2015 in West Hollywood, California. The evening started at The Nice Guy before moving over to Bootsy Bellows – FameFlynet