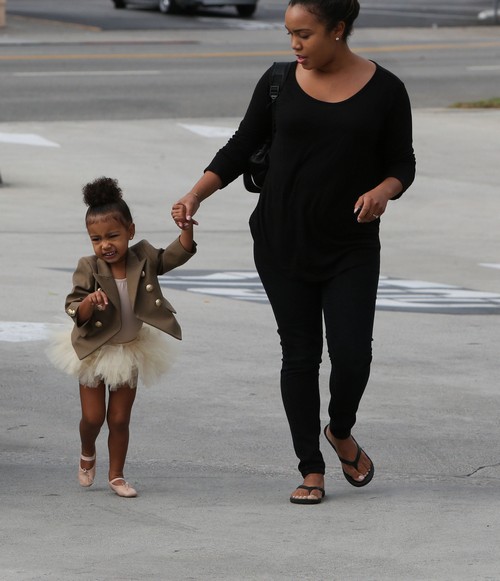 North West proved to be a real star when the tiny tot shut down paparazzi cameras all by herself. The soon-to-be big sister was on her way to ballet class with a woman who must be one of Kimye’s servants when she was hounded by the paps’ cameras.

That’s when little Nori put the photographers in their place with a simple request. West told the photo hounds, “I said no pictures!” in a way that would only make her daddy Kanye West very proud.

There is no way North West learned that line from her mama. Kim Kardashian would never turn down a chance to get her picture taken. Kanye West is another story though. The notoriously broody rapper has a love-hate relationship with paparazzi and certainly has told a few to stop snapping in his lifetime.

Let this be a lesson in just how quickly kids can pick things up from their parents. North West is used to being in the spotlight at just 2 years old. It must be overwhelming for the tot to be hounded every time she leaves the house.

Still, where most 2 year olds would have a meltdown or might even be scared, leave it to Nori to tell the paps to take a hike. She pulled off the photographer rebuff and then continued walking into her dance class completely unbothered.

The swarm of photographers outside North West’s Los Angeles strip mall ballet class was pretty ridiculous. It is expected that the daughter to two of the most famous celebrities in current history would get a lot of media attention, but where do we draw the line on harassing celebrity kids?

Can we also mention how surprising it is to see a celebrity kid like Nori taking classes in a strip mall studio? It seems that Kanye West and Kim Kardashian could invest in private lessons or have someone come to their home in order to shield their toddler daughter.

Having the nanny parade North West through a Los Angeles parking lot while dressed up in her ballet outfit and a fitted Balmain jacket screams of photo op. Did Balmain make a deal to have Nori spotted in their clothing? Maybe the paparazzi aren’t the only ones to blame for Nori’s encounter with the paps. She sure sounds rehearsed (although very cute.) Do you think the whole thing was a set up to get a cute soundbite from North West?

North West is taken to ballet class in Tarzana on October 28, 2015 by FameFlynet