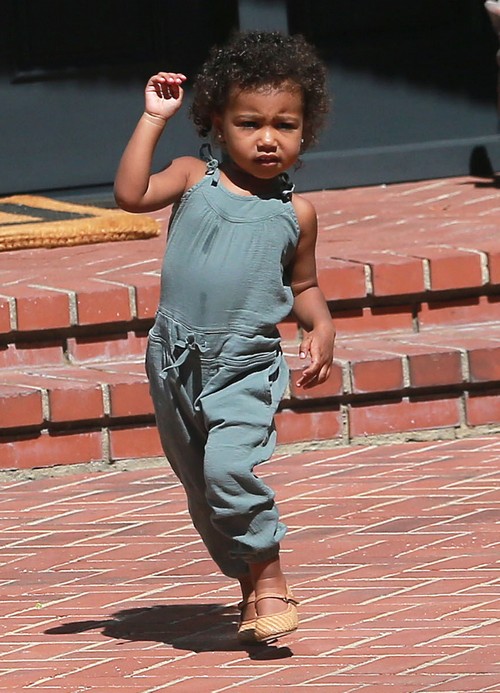 Is Kanye West really North West’s dad? Kim Kardashian may have some explaining to do. Instagram trolls have launched a formal investigation in to North’s DNA after French Balmain designer Olivier Rousteing shared a baby photo of himself – and he looked like North West’s twin! Of course, it didn’t take long before Olivier and Kim Kardashian’s Instagram followers made the comparison between the two and began hurling accusations that the French designer was North’s real father. The fact that Kim Kardashian clicked like on Olivier’s baby picture is only adding fuel to the fire.

According to Naughty Gossip, Olivier’s baby picture was used in an interview he did for the September issue of Vogue Magazine – and in the internet haters’ defense, he does look like North West’s doppelganger in the picture. Kim Kardashian does spend a lot of time in France, and she loves herself some Balmain, but we’re having a tough time buying the theory that Olivier Rousteing is her baby-daddy.

First of all, Olivier Rousteing is a pretty classy guy – which means he’s not really Kim’s type. She prefers rappers that knock out photographers and get on stage high as a kite and announce on live television they are going to be the next president. Secondly, and let’s be real, sure North looks like Olivier but she also looks like Kanye West. And, have you seen any pictures of North lately? She definitely has Kanye’s attitude. We used to love a good conspiracy theory about North’s DNA, but as she gets older – it seems more and more likely that she really is Kanye’s baby.

What do you guys think? IS there a chance the conspiracy theories are true and North West’s real father is Balmain designer Olivier Rousteing? Or is Kanye West really her dad? Let us know what you think in the comments below!