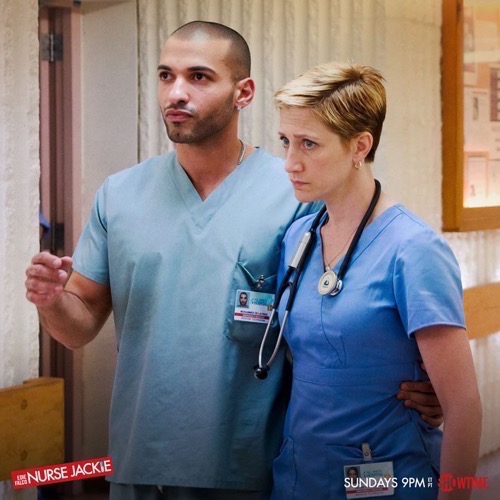 Tonight on Showtime the twisted and darkly funny Nurse Jackie is back with an all new Sunday season 7 episode 4 called, “Nice Ladies,” and we have your weekly recap below. On tonight’s episode, Akalitus [Anna Deavere Smith] doesn’t trust Jackie [Edie Falco] when she shares the news that the hospital is being sold to Norwegian developers.

On last week’s episode, Jackie returned to All Saints but she was back to square one under the Diversion Program. She couldn’t touch patients or medication and had to undergo daily urine screens. But in her new role she uncovered two big secrets. Meanwhile, Zoey learned the outcome of her Master’s program application; and Carrie withheld news from Coop. Did you watch the last episode? If you missed it we have full and detailed recap, right here for you.

On tonight’s episode per say the Showtime synopsis “Akalitus doesn’t trust Jackie when she shares the news that the hospital is being sold to Norwegian developers; Carrie meets Coop’s proposal with an unexpected reaction that causes him to make a major life decision; Jackie’s dealing takes a surprising turn when she gets strapped for cash.”

Tonight’s premiere fourth episode looks like it is going to be great and you won’t want to miss it, so be sure to tune in for our coverage of Showtime’s Nurse Jackie tonight. While you wait for our recap hit the comments and enjoy the sneak peek of tonight’s season finale below.

On #NurseJackie, her lawyer Barry Wolfe is in court talking about how she had the pills for a humanitarian effort and stopped to save a life on her way out of town. The couple is there. Barry says he takes a Xanax before he gets on a plane. He says they owe Jackie gratitude and should dismiss the charges. It worked. She leaves court happy with Eddie and he tells her she’s a free criminal. They kiss. Barry is there and Jackie thanks him. He reminds her she owes him money and Barry says it’s $15k ASAP. He says if she wants him to show up for her nurse’s license hearing, she better pay up.

Eddie says he wants to help and she says he doesn’t even have a job. He asks how she’s paying and she says she fixed Vivian’s benzo dosage and sold the extra. Jackie tells Gloria that her criminal charges were dismissed and wants to be back to full time. Gloria says no go and she has to wait for the hearing in three months. Jackie asks Gloria about All Saints being sold to be turned into condos. Gloria laughs and Jackie says she must now know. Gloria thinks Jackie is toying with her.

Coop tells Carrie that she’s young and they have a bright future. Coop is rehearsing with Eddie. Then he says he’s been thinking about his future with Carrie since the miscarriage. Coop says he wants to try again and wants the house and everything they talked about. Eddie tells him to go tell Carrie and lock it down. Eddie says during tough times, women respond to decisive action. Coop asks didn’t Eddie get fired for Jackie. He says no, he got fired for handing Zoey a Xanax.

Vivian is at the hospital and demands to see Jackie the head nurse. She tells Carrie and Zoey that she takes care of Vivian at her home and says they should give her something for her pain. Zoey tells Jackie to come to her office now. Charlane shows up and Vivian says she wants to put her in assisted living. Jackie says they’ll talk about once Carrie has diagnosed her. Jackie tells Jackie that Vivian is scared and trusted her. Zoey has stickers and a chart for Jackie to reward her.

Jackie says she’s not seven and Zoey says now she won’t get any stickers. Zoey tells her she’s doing her best. Jackie says she’s working two jobs and drowning in debt while Zoey is head nurse. She goes to see Gloria and says she doesn’t know how to deal with her. Gloria says to stick her on toilets and dead bodies. She says you have to let go of people like that because you can’t fix them and they are dead weight. Jackie sits outside eating Sour Patch Kids.

Coop and Carrie are on a bench and she offers Coop some of her sandwich. Jackie watches them from across the street. He tells Carrie they made many plans but forgot one. He drops to one knee and she says he can’t ask her there in traffic with pigeon shit. He says he can do better. She says she has to get back to work and rushes off. Jackie watches all this go down. Coop eats the rest of Carrie’s sandwich and then they see a bike messenger get knocked off his bike by a cab.

They both run over to help and a gurney is wheeled out with a backboard. Jackie tells Coop no one said anything about touching patients outside the hospital. Coop says he won’t tell. Charlane tells Jackie that her mom needs to be in a home. She says she fell down yesterday and soiled herself yesterday. Charlane says she needs a full-time place to stay that can handle her and her medications. Zoey tells her to stop talking to patients. Charlane says Jackie is her mom’s nurse and Zoey says not there she’s not.

Grace shows up to take her mom to lunch to celebrate. Zoey says she gets a half hour lunch one she’s done with her duties and tells Jackie to clean the lab like she asked. Jackie hugs Grace and says she has to do what Zoey says. Jackie goes to clean and Zoey tells Grace this is very complicated. Grace asks her when she became an asshole. Jackie sneaks in to check on the biker guy. Coop comes in and says he did the scan. Jackie says of course and steps out. She goes to clean the lab.

Coop follows and tells Jackie she still doesn’t trust him. Jackie says she can’t stop worrying about her patients. He asks how she can stand it to be there with everyone treating her like shit. Coop says looking at her makes him feel bad. He asks why is she there when she can’t do what she wants to do so badly. Jackie says she comes to work there so she doesn’t use. Coop says that’s screwed and says if he knew he wasn’t wanted there, he’d be gone right away.

Jackie tells him their first patient together, he didn’t listen and the kid died. She says today, he did the scan because he got better. Jackie says she comes there every day so she can get better. Coop asks Carrie what places are off limits for a proposal. She says Union Square, Olive Garden, planetarium, nature trails, any trails. Coop says he loves that she’s specific. Thor tells Carrie she should tell him she doesn’t want to get married. He says it’s not nice and Carrie asks if Thor can tell him.

Vivian says she should dump Coop off somewhere no one knows him like her family is doing to her. Vivian gets a call from Jackie and tells her to look straight ahead. She tells her to listen and not get angry. She says she’s a fighter and that’s what she likes about her. She says going into a senior home is medically what she needs. Vivian says she won’t know anyone. Jackie says she will go with her and make sure she has friends and won’t leave until she does.

Coop chases Carrie down and says he got a call from a head hunter in Boston to be chief internist. He says he told him no because his future is there with her and says she’s perfect. Carrie says she loves him and Coop says he loves her too. Then Carrie says he should take the job as he drops to one knee. He stands and says he never said it was Mass General. Carrie says she knew because she made the arrangements. She says she wants him to have the future he deserves and says it’s not her.

Coop asks if she doesn’t want him. Carrie says she just did a very nice thing for him. She kisses him and walks away. Zoey goes to talk to Gloria and says she’s been thinking a lot about Jackie. She says she will test her fluids and track her progress but all the other stuff – the cleaning, dead bodies – she’s not supervising that. Gloria says Jackie’s actions have consequences and Zoey says so do hers. She says she can’t treat people like that. She asks Gloria to ease up a little.

Coop bursts in and asks to talk to Gloria in private. Jackie is on her hands and knees scrubbing the lab floor when Gloria says Coop gave his two weeks notice and says he did it after a conversation with her. Gloria asks if she told her about the Icelandic condos. Jackie says no and then says she won’t tell her what they talked about. Gloria tells Jackie that she’s a non-facotr in this hospital. Jackie pulls off her gloves, stands and goes to the computer. She looks around then types.

She takes expired medications with her. She tells the seniors she’ll be back on Monday to check on them and every week thereafter. Jackie left a message on the monitor screen – that’s why she took the batteries, so they couldn’t change it. It says: Is All Saints closing its doors forever? Meeting Friday! Basement – 7 am. Gloria is not pleased and storms off. Zoey says it’s crazy. Gloria tries to take down the message but the keyboard isn’t working.

Jackie comes home to a smiling Eddie. She tells him she was at the retirement place in Queens helping out Vivian and the patients. She says she danced some slow polkas, heard war stories and came home with pockets full of drugs. She says she wants to eat them but Eddie says just to sell them. Then he says he had a better day than her and tells her he got a job and says he’s the new upper Eastside rep for Ilyira – a pain medication without the diarrhea. She says he’s a pharma babe.

He says they need to call her dealer. They go meet Gabe and she says he’s very easy going. Gabe hands over money and tells Jackie she looks great and has a glow. Eddie asks why he’s talking like that and Gabe reveals he and Jackie used to have fun. Eddie gets mad and Jackie says that he’s just a dumb kid. Eddie is furious and Gabe says sober people are crazy. Gabe says she’s crazy and they’re done. Jackie tries to calm Eddie down but he’s furious at her.