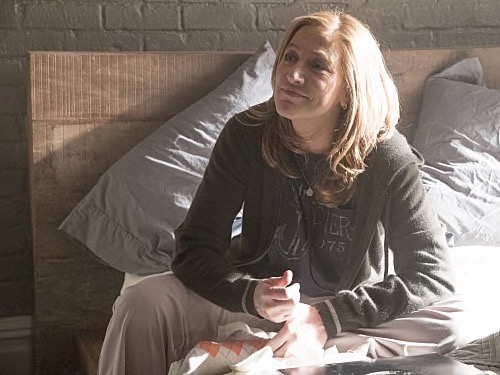 Tonight on Showtime the twisted and darkly funny NURSE JACKIE is back with an all new Sunday June 14 season 7 episode 10 called, “Jackie and the Wolf” We’ve got your recap down below! On tonight’s episode an unexpected knock at the door puts Jackie [Edie Falco] and Eddie in jeopardy.

On last week’s episode Jackie and Zoey set out on an unexpected road trip. Stressed out by the long drive, Zoey finally confronted Jackie with her frustration. Meanwhile, Dr. Prince attracted a neighborhood mob to All Saints. Did you watch the last episode? If you missed it we have full and detailed recap, right here for you.

On tonight’s episode per say the Showtime synopsis “Jackie learns that her nursing license hearing has been moved up to today. As the hearing approaches, Jackie has final confrontations with Zoey and Akalitus. At the hearing, Akalitus attacks Jackie in front of the licensing board, which causes Jackie’s lawyer to bring out the big guns.”

#NurseJackie begins with her looking through some papers and asking Eddie what it is. He runs to take it and she asks if he’s writing songs but he says those are his vows. She says he’s very sensitive. He has a sore hand from the punching. They kiss then the doorbell rings. It’s Gary Roberts from Straw Pharmaceuticals who says they’ve had some discrepancies with his Alyria account. Eddie introduces Jackie then Gary says the samples and signatures are inconsistent.

He says there are 200 samples unaccounted for but Eddie says that’s impossible. Eddie says he’s no good with paperwork. Gary says he has to turn over the rest of the samples until they get the numbers sorted out. Eddie says it’s no problem and goes to get the goods. He hands over his case and Gary opens it up. He checks and asks if he’s removed any samples from the packaging. Eddie says he hasn’t and Gary says they just need to take a closer look. They bring in a drug dog and Eddie asks if they need a warrant. Gary says it’s in his employment contract.

Eddie asks if he can train the dog to do his paperwork. They walk the dog around and Eddie shows the guy his wedding vows while the dog sniffs. Jackie has a pill in her hand and pops it in her mouth to stop the dog from finding it. They don’t find anything and Gary says he hopes it’s just a technicality then says to get the paperwork done and stay out of the filed for a couple of days. Jackie goes to spit it out and she says the dog was coming at her. She says she has her pee test today. She says it’s half dissolved and if any is in her system, she’s screwed.

She asks why there’s a loose pill and he says he signs a few extra bottles of pills and it will take a few weeks for the numbers to be right. She sees her lawyer called three times – her hearing was moved up and she tells him that she needs him to not freak out and says there is a small chance of drugs in her system. She says she had a pill in her mouth but didn’t use. She asks to postpone but he says this is the chance to get her license before it closes. He says whatever she does, don’t take a pee test. Zoey comes up and says she signed up for more classes and thanks Jackie for encouraging her.

Jackie says her hearing was moved up and Zoey hugs her and says they can be coworkers again. She asks if Jackie is nervous and she says she is. The lawyer says to go ahead and tells her to relax and act nervous. Zoey says she’s a diversion superstar and Gloria says she’s looking forward to closing this chapter then asks Jackie about a deal she made with the Norwegian. Jackie says no deals. Zoey tells Gloria that Jackie has done everything and says that she has clean urine screens. Gloria says these people don’t f-k around and she hopes her paperwork is in order.

Carrie checks the Norwegian – he wants to be checked out after he got punched by Eddie. She offers him some cover up and asks doesn’t he have an orphanage to close down. He invites her to a museum opening and she says that sounds so dull then says isn’t he married. He says he is in Norway then Thor kicks him out to reserve the bed for real patients. Jackie comes to check on Bernie then asks if she can use his office to prepare for her timing. He says it’s great news and says no problem.

He tells her to have some of his vodka if she wants. He leaves them and Barry goes over what will happen. He says it’s not 12 Angry Men and says to keep it short and honest. She says she’s nervous and asks who she’s making the plea too. He says it’s tight asses from the nursing board. He asks about her monitor and supervisor. She says Zoey is great but Gloria not so much. He says Gloria has skeletons and he’ll bury her up to her neck if he has to. She says she doesn’t want her buried then asks if she needs to change. Zoey comes to get a urine sample but Barry says they’re busy now.

He intimidates her into leaving and Jackie curses. Thor says the waiting room is still packed and Bernie is excited. Thor says he wasn’t expecting to be inspired by a doctor at the end and then hands Bernie an otoscope. Bernie’s vision is blurry and he reaches for it with two hands. He can barely see it. Thor asks if he’s okay and then the vision goes back to normal. Bernie says he just got a head rush. Thor looks concerned. Jackie calls Eddie who is working on making his paperwork align. He asks if she wants him to come down. He says to drink a lot of water and don’t take the pee test.

Zoey comes out and says she needs a pee test before the hearing starts. Zoey turns her back and Jackie tells him she has to go. Jackie follows her nervously inside. Jackie walks past the bathroom and Zoey follows her into a room. Zoey asks what’s up and Jackie says she can’t do it. She says she’s not doing the fucking pee test. She says she doesn’t have time to sit on the toilet and be humiliated right before she fights for her license. Jackie tells her no. Zoey curses. Barry is waiting and says let’s go do this. They head into the hearing.

Zoey tells Gloria that Jackie wouldn’t take her pee test. She says she doesn’t know why. The hearing starts. Barry tells Ellen that he’s passionate about nurse’s rights. Jackie thanks them for coming all this way and says she’s grateful for the diversion program and says she loves being a nurse more than anything. She says she loves helping people and hopes today proves that to them. Ellen says let’s start. Then Bernie and Thor show up. They tell Ellen they want to add their two cents about how much they love Jackie. Bernie says he’s the ER Chief and Thor is another nurse – they tell Ellen.

Bernie says Jackie has kicked ass and helped save people. Barry tries to interrupt but Bernie says she jumped in and it was like MASH then says that was a good show – not like the movie. He says he loves Hawkeye. Thor takes him out of the room. Barry says she touched three patients and only in emergencies and all lived because of her intervention. They ask Zoey to make a statement but she says no then Gloria asks why Jackie didn’t submit a urine screen today. Ellen calls for a recess.

Jackie steps out in the hall with Zoey. Gloria glares at Barry. Jackie takes the cup and tells Zoey to look at her. She says she’s not high and says something happened this morning. She says she had a pill in her mouth because she was protecting Eddie. She asks from what and she says it was a work situation and she can tell her more. Jackie says it wasn’t planned and she had to get rid of it and she spit it back out. Zoey says that sounds crazy and Jackie says if the hospital closes while she’s in diversion, she will never work again. Zoey asks how she gets into these situations.

Jackie says she’s an addict and it’s her life. She says it’s cost her every relationship in her life and she will likely always have these cravings. She cries and says she’s clean but Zoey says she’s a really good liar. Jackie says it’s not about the hearing it’s about the two of them then asks Zoey if she trusts her. Zoey says she’ll pee in the cup for her – Jackie thanks her. Ellen checks the urine screens and says they’re all negative but Gloria says she has serious concerns about her future sobriety then says she’s engaged to a pharmaceutical rep.

Gloria says he was involved in numerous drug-related suspicions. Gloria says Jackie lies and makes bad choices that have cost her career, husband and daughters. Jackie yells then tells Barry to go ahead. Barry opens the folder then says they should talk about Michael. He says Gloria’s son is an addict with a string of nationwide arrests and then she abandoned and he’s wanted right now. Ellen asks if it’s going somewhere. Jackie says her supervisor can’t separate her personal life from her career. Barry says Jackie is bearing the brunt of Gloria’s personal issues.

Zoey asks to make a statement. Barry asks when was the last time Gloria treated a patient and asks if she treated one recently then says her nursing license expired a month and a half ago. Ellen says none of this speaks well for anyone and says they need some time to consider. Jackie sits outside when the Norwegian approaches and asks about her fiance. He says he talked to a friend at Straw Pharmaceuticals and says Eddie’s name was already flagged. She asks if he sent the f-ing dog. He gives her a Norwegian quote that says it takes one punch to get things rolling.

Barry tells Jackie they have a verdict. Gloria refuses to ride on the elevator with them. Upstairs, they give the decision and then adjourn. Jackie walks out and down the hall. She goes to the elevator then goes to her locker. She pulls out her blue scrubs and goes to get her new nurses ID. She was reinstated! She smiles as she walks down the hall.