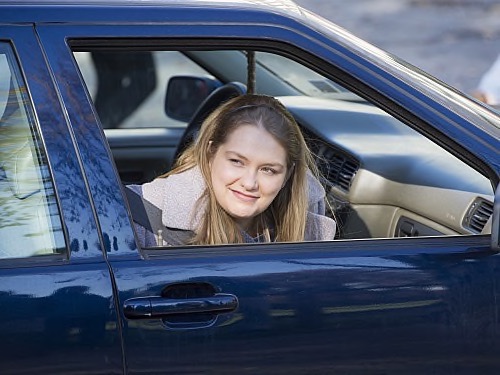 Tonight on Showtime the twisted and darkly funny Nurse Jackie is back with an all new Sunday June 7 season 7 episode 9 called, “Serviam in Caritate” We’ve got your recap down below! On tonight’s episode Zoey [Merritt Wever] finally confronts Jackie. [Edie Falco] Dr. Prince attracts a mob to All Saints.

On last week’s episode the hospital began the process of shutting down, Dr. Prince asked Jackie to help keep an ICU patient with a brain tumor from giving up his fight to live. Later, Jackie learned some disturbing news about Dr. Prince; and Thor revealed a romantic secret. Did you watch the last episode? If you missed it we have full and detailed recap, right here for you.

On tonight’s episode per say the Showtime synopsis “Jackie and Zoey set out on an unexpected road trip. Stressed out by the long drive, Zoey finally confronts Jackie with her frustration. Meanwhile, Dr. Prince attracts a neighborhood mob to All Saints.”

#NurseJackie begins with Jackie giving Bernie a painful shot of the experimental treatment for his brain tumor. She asks how long has he known about it and he says about a year. He says he took a sabbatical for surgery and chemo. He says nothing worked. She says she’s sorry and he says he thought he would run his own drug trial and go out in a blaze of glory instead of lying in bed dying. He asks about Eddie and she says they’re going out to dinner. He thanks her for giving him the shot.

Jackie leaves and spots Gloria so she hides the shot materials in her pocket. Gloria asks her about Eddie’s new job and their engagement. Jackie dumps the shot stuff into a hazard disposal can. She sees the Norwegians in the chapel when she comes to clean. The guy asks her to look at the condo model. He says he’s thinking three bathrooms and she asks about her nursing license. He says it takes patience and isn’t like ordering a hamburger. He congratulates her on her engagement and says he hears everything.

Zoey sees a recurring patient Lydia who owns a bodega. Jackie chats with her and tells Jackie she’s not touching her and is just assisting. Zoey says she needs check ups but Lydia says she works 16 hours a day and has no time. Grace calls Zoey and Jackie sees it. Zoey walks off to take the call. Jackie follows. Zoey tells Grace to calm down and says she’ll come find her. Jackie demands to talk to her but Zoey is busy taking notes. Jackie yells asking what’s going on.

Zoey says Grace is fine, safe and in Pennsylvania at a rest stop and her phone just died. Jackie freaks out. She and Zoey leave. Gloria asks where she’s going and then she walks back in and says she doesn’t have a license and doesn’t have a car. Zoey asks if she can take her and Gloria says she can cover her. Bernie tosses Zoey his car keys and they take off. Zoey struggles to get out of the parallel park that’s so tight. Zoey tells Jcakie to calm down and quit stressing her out.

They take off finally. Zoey is driving 10 miles under the limit and people are honking. Jackie rants and says she has to go faster or let her drive. Zoey says she’ll go faster but doesn’t really. Jackie asks where she was going and Zoey says maybe a concert but Jackie thinks it was a boy. Zoey tells Jackie she got mad at her mom when she was 14 and ran off to Coney Island then felt bad and came back home. Jackie says Grace is mad at her because she told her she and Eddie got engaged.

Zoey says poor Grace then says that might be hard for her. She says Grace has had a tough year. Jackie says she didn’t have to come and says to not take Grace’s call if she doesn’t want to be involved. Gloria runs through Lydia’s medical history for Bernie. Lydia says she’s not on any meds right now since she can’t get to her clinic and can’t afford costlier meds. Bernie says she’s going to have a stroke. He says they can fill all her pills today since they’re closing. He says he’s sending her home with a year’s supply at no cost. Lydia is thrilled.

At the rest stop, Jackie shows photos around. They can’t find her. Zoey says she’s there somewhere and Jackie worries Grace got into a car with someone else. Jackie walks around screaming her name. Zoey joins in. Zoey tells Jackie not to lose her temper and to let Grace explain. Zoey says Jackie was yelling when she was talking to Grace so she couldn’t hear her clearly. But then Grace is there and Jackie runs to her and hugs her tight. She says she scared the shit out of her.

She asks why Grace is there. She says she was going to Philly then the bus left without her. Zoey goes off on her for eating ice cream while she was hanging out and having fun. Zoey says she’s so tired of worrying about her and slaps the ice cream out of her hand. Jackie tells them both to get their shit together. There’s a line of patients to see Bernie. Lydia sent half the neighborhood. Thor tries to talk them into seeing Carrie but they all inist on seeing Bernie. There are 10 patients waiting.

Bernie comes out to look around and says he loves it. Thor says it’s his fan club compliments of Lydia. He says it’s great, let’s do it. Jackie and Zoey walk outside with Grace. Jackie asks Grace why she was going to Philly. She says she was going to prospective student weekend at U Penn. She asks why she didn’t just tell her and Grace says they wouldn’t let her go. She says Penn has tons of scholarships and she can work too. She says they do whatever they want and can’t tell her not to reach for something.

Jackie says she’s 16 and can’t just run off without telling them. She tells Grace to get into the car. Zoey wants Jackie to drive back since she’s too stressed. Gloria is annoyed at the patients but Bernie says this is what the news should cover – how much the neighborhood needs All Saints. Gloria says they need to send half of them away but Bernie says they need to help as many people as they can before they close. He says he doesn’t want any medicine left on the shelves when they close.

Eddie shows up looking for Jackie and Carrie says she went to Pennsylvania. Bernie greets him and Eddie asks why Jackie left – Bernie says she went to pick up Grace and he asks Eddie to help people find a place to wait. Jackie drives them back from PA. Grace sleeps in the back. Zoey checks her phone. Jackie glances back at Grace then Zoey does too. Jackei tells Grace that they’re there. They’re at U Penn instead of NYC. Grace is thrilled. They get out of the car.

Jackie give Grace her charger and says to call with the name of her dorm and says she’ll deal with Kevin. She tells her to take the train home and Zoey tells her to make friends with the nerdy girls because they will be there when shit gets real. Jackie asks for a thank you and Grace gives her a big hug and thanks. Jackie is all teared up and Zoey says they have to go so she can get back for her second shift she owes Gloria.

Eddie says it’s like a bank run when he chats with Thor. The Norwegian wants to know what’s going on when they put patients in his chapel. She says the building doesn’t belong to him and he wheels a wheelchair bound man out into the hall. Gloria calls him a heartless foreigner. He says to get the f*ck out of her face then Eddie comes in and punches the guy when he touches Gloria.

The Norwegian says he punched the wrong person and says to tell his GF that their deal is off. Gloria asks why Jackie would have a deal with that a-hole. He says he has no idea and says to take it up with Jackie. He leaves angry. Jackie and Zoey are stuck in traffic and says she’s going to miss dinner with Eddie. Zoey yells at her and says she doesn’t know why she snapped. She says she doesn’t hit ice cream. Jackie says she knows that. Zoey says maybe that’s who she is now – a person who terrorizes teens.

Jackie says she’s right and is so sorry for what she put her through. Zoey starts crying and says she sucks at this job and the BS paperwork and pee test. She says when she gets home, she just wants to hide under the covers and listens to Adele. She says she hasn’t turned in a paper for the last three weeks and is failing at everything. Jackie says to look at her. She does. Jackie says she better not quit. She says she’s a great nurse and has more heart and skill than anyone else there.

Zoey cries and says she’s so tired. Jackie says to look after herself and stop worrying about everyone else especially her. The traffic starts moving. Carrie checks the Norwegian’s nose and says it’s not broken. He flirts and she asks if she gave him some signal that she’s interested. He invites her to the ballet and she says she’s not dating anyone then says he’s the face of evil around there. He says sometimes it’s fun to date the bad boy. He tells her to think it over and he’ll check back.

Carrie smiles. Jackie tells Zoey she’s sorry for the bad road trip. Zoey asks her to park the car so she won’t be late for her shift. Jackie turns up the radio and gets out of the car and does a little dance for Zoey. Zoey starts laughing hard then joins her for a dance on the sidewalk. They dance around in front of All Saints like crazy people. Zoey dances her way inside the glass doors and Jackie watches her go.