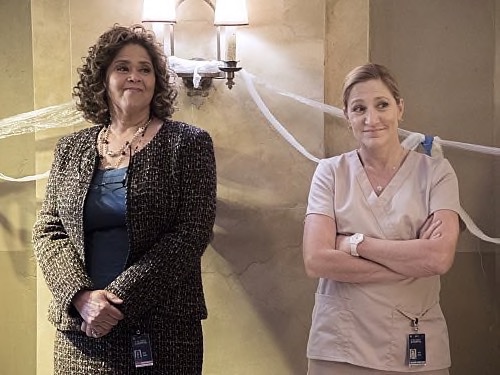 Tonight on Showtime the twisted and darkly funny NURSE JACKIE is back with an all new Sunday May 31 season 7 episode 8 called, “Managed Care” and we have your weekly recap below. On tonight’s episode as the hospital begins the process of shutting down, Dr. Prince asks Jackie [Edit Falco] to help keep an ICU patient with a brain tumor from giving up his fight to live.

On last week’s episode Jackie became determined to stop dealing and made one last purge of her stash with Eddie, but the deal went awry just as their relationship reached a new level. Meanwhile, Zoey blamed herself for a patient’s death and Carrie steps forward as an unlikely ally; and Dr. Prince and Akalitus bonded over lunch when she revealed something from her past. Did you watch the last episode? If you missed it we have full and detailed recap, right here for you.

On tonight’s episode per the Showtime synopsis “the hospital begins the process of shutting down, Dr. Prince asks Jackie to help keep an ICU patient with a brain tumor from giving up his fight to live. Later, Jackie learns some disturbing news about Dr. Prince; and Thor reveals a romantic secret.”

Grace says Eddie cheated with her when she was married to her dad and gave her mom drugs. She asks for boots. Jackie tells Eddie that Grace didn’t freak out and it was great. Eddie introduces Jackie to a woman on the street as his fiancee and they get congratulations. She says she’s nervous to tell people at work but Eddie says people will be happy for them. They kiss and she heads into work. He tells her to have a good day.

Zoey and Carrie are bonding and just got back from a Soul Cycle workout. Zoey is in a lot of pain. Jackie says she has news but then Gloria comes in and says All Saints is in escrow and there will be a 90 day phased shutdown. She says the ER will be the last to go since they were deemed essential. Zoey asks what escrow is and Gloria says it looks like it’s happening and they need to think about their future. Thor comes in and announces that he got married.

He says he and Reuben went to City Hall this morning. Zoey hobbles over and hugs him. Gloria congratulates him and says they needed some good news this morning. He stole Jackie’s thunder but Zoey and Carrie are upset they were denied the gay wedding experience. Thor says they have to do what they must and Carrie and Zoey agree it’s a challenge. Clinical trials are shutting down first and Jackie and Thor walk with a patient, Joe, who’s being transferred to the Mayo clinic.

Jackie says the Mayo is the best. Joe tells Natalie he doesn’t want to go. Bernie runs up and is upset to hear about the clinical trial shut down. Bernie says Joe shouldn’t be moved but his wife says he has to be moved. Jackie says they can put him into the ER and stall for time. Jackie says they can wipe the chart so he’s not charged and Bernie is excited about the plot. Eddie calls Jackie and she says she didn’t tell anyone then says Thor got married. She says she couldn’t steal his thunder.

She invites him to Thor’s event later. Jackie sees them wheeling furniture out of rooms at the hospital. She goes to the chapel to talk to the Norwegian. She asks if the chapel is non-essential but he says the transition team will be there. She says it will be bad for morale to do that. She asks about his friend on the nursing board and he says once escrow is done, he will honor the deal to her her license back. Gloria gets a call and says Joe won’t get the drug unless he’s at the Mayo trial.

Bernie says the trip to Mayo could kill him but Gloria says his disease is so advanced they should be thinking about making him comfortable. She offers to find him a good hospice. Bernie is very upset. He and Jackie go to look around the clinical trial area. It’s dark and vacant. He goes looking for the pharmacy but Jackie says she can get fired for going in there. She says she’s going to stay out there and look for stuff the ER needs.

Jackie relents and goes into the pharmacy then tells Bernie she’s engaged. They ransack for drugs then leave. Carrie and Zoey talk about a party for Thor who doesn’t like their ideas. He says he’s not there to make up for their failed relationship. Bernie and Jackie have to evade the Norwegians on the way back. Gloria is interviewing for a new position but only has an Associate’s degree. They want a Masters. She’s told it’s not the right fit.

Gloria sees Eddie in the waiting room and he asks how it went. She says she was there for a deviated septum then asks if he’s intercepting. He says he’s a pharmaceutical rep. She’s not happy to hear he’s pimping pain meds. Gloria calls Zoey and asks if she drug tested Jackie today. She hasn’t but says she will now. Carrie walks in on them and says Reuben is all set. Thor set up Joe and Bernie comes in and says they are sending him to a local hospice with the meds but Bernie has to come give the treatments every day.

Joe asks Bernie to help him day. His wife is horrified. Joe says he’s lived at a hospital for two years and tells his wife he’s sorry but he can’t be strong anymore. Bernie tries to talk him out of it. Joe says he wants to die while he’s still him. Thor tells Jackie he’s a miracle of modern medicine as a type one diabetic. He says Reuben has HIV but it’s undetectable and will live a long life together. Jackie encourages him.

Jackie goes to sit with Natalie, Joe’s wife, and says it’s a natural reaction to argue with him about it. Natalie says she misses fighting with Joe about nothing. Jackie says she may be more ready to let go than she admits. Carrie and Zoey start up Reuben and Thor’s party. The Norwegian shows up in the chapel where they’re holding the fete. The man says he rages inside but Gloria will never know then says he has a gesture for the happy couple.

Gloria tells him they’re only in escrow and a lot can happen. She dances away from him sassily. He looks around at them dancing. Jackie calls Grace and says she’s the love of her life even though she’s marrying Eddie. She says she wants her to get to know him. Grace promises to try then says she has to go. Jackie goes to see Bernie who says he sent Joe home with a pile of morphine to give him peace at his own schedule. Bernie shows her Joe’s brain scan. The tumor is huge.

Bernie says he’s going to go to the party and smoke a lot. He tells her to put the meds into his office. Jackie looks at the scan name and it’s Bernie’s! He’s the one with a giant brain tumor. She says – oh f-k. Jackie goes to the party and finds Bernie smoking in a corner. She says the C22 is in his office. She asks how much time he has. Bernie says all night. He asks her to dance. They dance to a slow song. Thor and Reuben dance slow. Jackie says the song is sad and great.

Eddie is there and asks to cut in. Bernie hands Jackie over to her fiancee. Carrie and Zoey slow dance. Gloria asks Zoey if she tested Jackie today then says Eddie is peddling pain killers. Bernie comes over and tells Gloria to come dance so they can show the others how it’s done. He drags her off to dance. Gloria says it’s great that the last thing in this chapel is a wedding. He says there are wedding bells everywhere and says Jackie is getting married too. Gloria is shocked.

She says – of course they are – and isn’t pleased. Bernie says he may even get married again. Jackie says Thor and Reuben are a nice couple and he says that will be them some day. Grace gets onto a bus . Where is she going? Looks like she’s running away!