Nurse Jackie Series Finale Recap and Spoilers – Guess What Jackie Does? “I Say a Little Prayer” 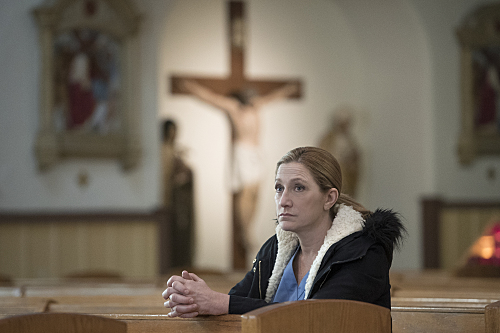 Tonight on Showtime the twisted and darkly funny NURSE JACKIE is back with an all new Sunday June 28 season 7 series finale called, “I Say a Little Prayer” and we have your weekly recap and spoilers below! On tonight’s episode The series concludes with an unexpected guest surprising everyone at Fiona’s [Mackenzie Aladjem] confirmation rehearsal.

On last week’s episode Jackie was forced to perform a procedure on her own when Dr. Prince put a patient’s life at risk. Meanwhile, Zoey is shocked by Carrie’s secret; and Eddie gets in hot water at his job, which jeopardizes Jackie’s position at All Saints. Did you watch the last episode? If you missed it we have full and detailed recap, right here for you.

On tonight’s episode as per the Showtime synopsis “Jackie is forced to perform a procedure on her own when Dr. Prince puts a patient’s life at risk. Meanwhile, Zoey is shocked by Carrie’s secret; and Eddie gets in hot water at his job, which jeopardizes Jackie’s position at All Saints.”

Tonight’s finale episode looks like it is going to be great and you won’t want to miss it, so be sure to tune in for our coverage of Showtime’s Nurse Jackie tonight. While you wait for our recap hit the comments and enjoy the sneak peek of tonight’s season finale below.

#NurseJackie is praying. She asks God to make her good. Fiona is practicing for her confirmation. She’s nervous as her family watches whispering hints. Kevin asks if Eddie is coming to the confirmation and says she’s not sure because he has work issues. She tells Fiona to keep running her catechism with her sister. They ask if Jackie is okay with it being her last day at All Saints.

She says she’s looking at Bellevue. Then a cute little boy asks her to lunch – it’s Eleanor’s son! She came for the confirmation and says she doesn’t miss New York but does miss Jackie. She says Grace is babysitting so they can have fun and tells Jackie she has a pile of money on her and asks where she wants to go. Zoey and Thor remark the ER is busy like it’s a going out of business sale.

Eleanor is there and asks where Coop is. Zoey says in Boston then realizes who asked and screams then runs to hug her. Thor says it’s like Jackie brought fairy dust to work and then Eleanor asks if that’s a fairy dust ring on her finger. Carrie introduces herself to Eleanor and asks if she remembers her. Jackie gets a call from Bellevue and says she got the job. She says they asked for recommendations.

She says she told them about Zoey. She says it’s out of the blue then asks if she can think about it. Jackie says of course. Bernie comes to turn in his badge to Gloria and says he’s sorry. She says he has a rough enough road and not to worry about it. He says he hates not being him and says it feels like he’s being erased. He says two of his four ex wives are coming to take care of him.

She says at least the two assholes stayed away. He says he’d like to stick around today not as a doctor but just wants to be near people. Gloria comes down and has a fit over Eleanor. She tells Zoey to get her a lab coat. Jackie asks her to come join the party. Gloria bristles and leaves and Jackie asks what she did. She says Gloria fired Eddie for no reason and is having trouble with her job search.

Eddie is in with his lawyer (Jackie’s lawyer) and he’s being raked over about his sample. They tell him that Eddie’s paperwork checks out and the lawyer says the DA served a search warrant on a pain management clinic and found a bunch of Ilyria that matched his sample numbers. Then they show video of Eddie in the lobby with Jackie. He asks to speak to his lawyer in private.

Donald, formerly known as God, is in the ER and says Abilify has straightened him out. He fainted and Jackie tells Zoey she wants her at Bellevue with her. Zoey changes the subject and walks away. Eleanor offers Zoey a pack of gum when she sees her trying to swipe some through the bars of the closed snack bar. Eleanor says she’s glad everyone is doing well. Zoey says it’s been tough.

She mentions Jackie’s relapse, her arrest, jail and diversion then says she had to pee test her every day. She says she wondered what Eleanor would have done. Eleanor had no clue about any of this. She asks Zoey how she is and she hugs her and asks Eleanor if she can stay. The lawyer asks Eddie why he didn’t tell him. He says the DA has him on camera at the clinic.

Eddie asks why they’re not arresting him and the lawyer says the DA really wants the pill mill and says to give him the goods on Dr Wu. He says he can’t open that can of worms and it will go back on too many people. The lawyer knows he’s protecting Jackie and asks if he’s willing to go to jail with her. Eleanor asks Jackie if she’s high. Jackie says she has worked her ass off to get clean.

She asks Jackie why she has to make it so f-ing hard to be her friend. Jackie calls Eddie and gets voice mail. She says she hopes the deposition went well and says she got the job. A lunatic comes into the ER yelling about someone who hit him in the head and stole his stash. He pulls a gun and Jackie tries to get him to back down. Bernie comes in and asks him to give him the gun.

He says no and then Bernie says to point the gun at him. He tells him to point it at his forehead. The guy asks WTF and Bernie says his name is Bernard Prince and says he’s with the NYPD in Major Crimes. He says he’s going to count to 10 and if he’s still there he’s f-d. He says if he’s gone, he’s not f-d. The guy puts the gun right to his head and Bernie says, here we go. He starts counting.

By the time he hits three, the guy runs. God says people in NYC are crazy. Bernie says he needs a smoke. Jackie finds a guy in the bathroom. He says he hurt a guy and he’s coming for him to kill him. She says the guy came and went. She says he can stay there if he lets her clean up his arms. She helps him stand and he asks her to grab his coat. She says he’s been injecting heroin between his toes.

She tells him to lean on her and she helps him leave the bathroom. She treats him and says she’s going to transfer him to Bellevue where she’ll be working so she can keep an eye on him. He says he just hurt someone and he didn’t f-ing care. She says she understands and he asks if she’s an addict. She says she is and he says she’s a saint. She says far from it. She washes his feet for him (very Christlike).

Eddie comes to see Jackie at work and he says Barry is a great lawyer. He says the thing is, he confessed to everything. He says they had video surveillance at the pill mill. He says no one asked about her and he’s happy she was in a baseball hat. He says Barry wants him to testify against the pill mill doctor but it would have come back on her.

He says he’ll spend a year in a Martha Stewart prison then can come back to her. He says she’s his everything. She says let’s go home and he says let’s get a bottle of bourbon and come back to drink a toast farewell to All Saints. The addict is transferred to Bellevue but he tells her he doesn’t want his jacket with the drugs in it. He says he’s done with that shit.

Zoey says he was their last patient and they’re locking the doors because they’re out of meds. She asks Zoey again about coming to Bellevue with her. Zoey says she needs to move on and needs Jackie to let her. Jackie says they can move on together. She says she used to be afraid of Jackie then she wanted to be her then now all she does is worry about her.

Zoey tells Jackie she needs to go out and make mistakes that have nothing to do with her. Jackie says she’s like a daughter to her. Zoey says then she should understand and let her go her own way. Jackie tells her she’s proud of her and they both cry. Zoey tells her she’s going to volunteer for Doctors Without Borders. Jackie says she’s proud of her and Zoey is pleased.

Jackie dries her tears then goes to chat with Bernie. He’s happily smoking and she lights up too. Bernie tells Jackie not to blame herself for anything and says he’s made mistakes too. He says they raised three beautiful kids and says he’ll take them weekends and she can have them Christmas. His brain tumor is messing with his head. Jackie plays along and says that’s great and he’s a good man.

She asks if he’ll come to the party with her but he says he’s happy waiting in the waiting room. She touches his cheek and goes. He waves goodbye to her. In the ER, they are boozing it up. Eddie toasts Gloria and says he honors her. The EMTS show up with munchies and everyone is dancing and being silly. Carrie is drunk and is riding around in a wheelchair. Jackie goes into the bathroom with the junky’s bag of clothes. She spreads out the little packets of heroin.

She dumps some out and then snorts it. She does one long line in each nostril then shakes her head to settle it. She comes out of the bathroom and looks around. She looks at everyone enjoying the party. She looks at Zoey and pulls off her stethoscope and lays it down along with her employee badge and her watch. She walks down past the chapel and out the doors of the hospital.

She stops at an intersection then sees some nuns walking past. She heads down to Times Square and there is a flash mob of people there dancing in the middle of the street. She sits down among them then lies back. Zoey and Eddie run to Jackie who is passed out on the floor. Zoey screams for them to call Bellevue. They try to revive her. Zoey tells her she’s good and to hang in there. She tells her she’s good.

Jackie opens her eyes but is seizing and shaking. Everyone gathers around her. We don’t know if she’s dead or not. Aagh. What a series finale. I was kind of thinking they’d OD her but now we have no closure!