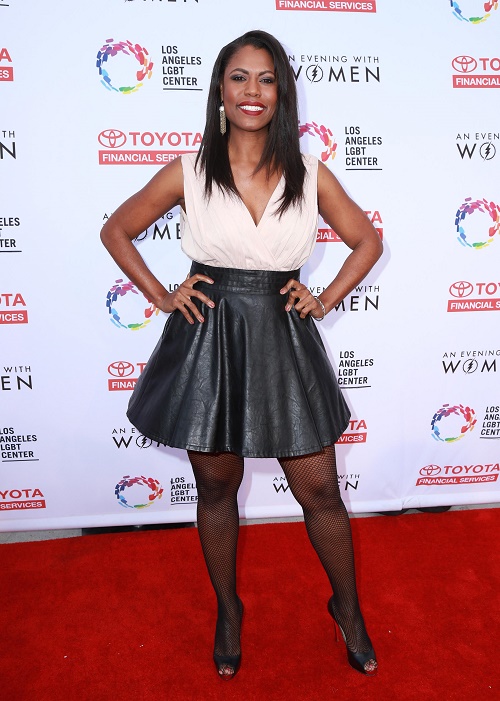 Has Omarosa Manigault‘s book concept been stolen by Real Housewives of Melbourne star Pettifleur Berenger? It’s definitely looking that way! Omarosa Manigault is the most hated villain in reality television history. She appeared in several seasons of The Apprentice – the premiere being the most notable one. Her maudlin antics incensed Piers Morgan, Ivanka Trump, Donald Trump, Latoya Jackson, and Satan. After the tragic passing of her husband, Michael E. Clarke, Omarosa did the unthinkable – she used the catastrophe to her advantage on The Celebrity Apprentice: All-Stars. Even her Messianic utterances did nothing to quell the absolute hatred everyone felt towards her.

In 2008, Omarosa sold her negativity in a book called The Bitch Switch: Knowing How To Turn It On and Off. The synopsis reads: “When a woman acts assertively, makes demands, and struggles for what she wants, she is labelled a bitch. The secret is to know when and how to turn on (or turn off) that bitch switch. Not being able to locate your switch leaves you open to being a victim; not knowing how to turn it off will get you a label that is hard to shake.”

This abhorrent, sexist piece of ‘literature’ was a failure from the get-go. No one wanted to read Omarosa’s quasi-intellectual thoughts. The publicity died down, Omarosa went back to her cave in Hell, and all was well in the world.

And then this happened: Pettifleur Berenger, one of the Real Housewives of Melbourne, released a book titled, Switch the Bitch: My Formula to Being the Champion of Your Life, Not the Victim. Wrong move, Pettifleur. Wrong move. Omarosa’s internal bitch switch went off like a post-Apocalyptic Klaxon. She raged and raged against the dying of the light, because monsters only come out at night. Omarosa’s lawyer, Bradford E. Cohen, got wind of the drama and sent a threatening ‘cease and desist’ letter to Pettifleur, demanding “a full accounting of Berenger’s book sales”.

Is this a classic form of plagiarism? Or are we dealing with Cryptomnesia, an unintentional form of ‘memory bias’? Decide for yourself by reading the synopsis for the RHOM’s book below:

Pettifleur Berenger, property developer and star of the hit reality TV show ‘The Real Housewives of Melbourne’, has written her first book, based on inspiring stories shared with other women as well as her own experiences with all types of relationships. The “Switch the Bitch” formula is like taking an off-ramp in a traffic jam, but it’s a completely alternative route you never before considered. The formula releases a woman from all the frustrations that are slowly grinding her down and wasting her life. Detailed anecdotes will walk you through the vital miss-steps a woman commonly makes in relationships, complete with the beneficial outcomes once she has ‘switched her bitch’. Or in other words, when she has reclaimed her own power in a relationship.

Which bitch has the biggest switch? Do you think it is plagiarism? Is Omarosa ‘losing her mind’ again? Let us know your thoughts in the comments below.