Once Upon a Time Spoilers Season 5 from DragonCon: Shocking Reveals by Maleficent, Cruella and Ursula!

BY Stormy Elizabeth on September 27, 2015 | Comments: one comment
Related : Once Upon A Time, Spoiler, Television 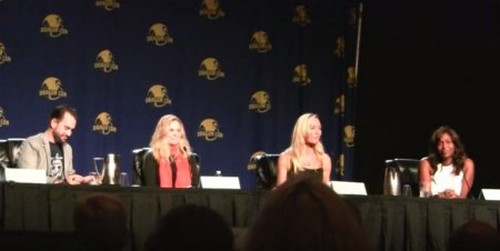 Three of the most evil queens of “Once Upon a Time” were in attendance at DragonCon in Atlanta, held annually on Labor Day weekend. The science fiction, fantasy, comics and gaming convention is the Southeast’s answer to Comic-Con and biggest nerdfest in the region. This year, the big bads from Once offered up some backstage scoop and a few “Once Upon a Time” Season 5 spoilers we’re sharing with OUAT fans here at CDL.

Here’s what Maleficent (Kristen Bauer van Straten), Ursula (Merrin Dungey) and Cruella De Vil (Victoria Smurfit) had to say about the antics on set and what we can expect from “Once Upon a Time” Season 5. They were asked about pranks on set and Merri Dungey talked about the actors and crew taunting her constantly with impromptu singing of “All About That Bass” which she hates.

Kristin shared that the four evil queens – the three on the panel plus Regina – held karaoke sessions between takes when they were stuck in Cruella’s car. Prompted by the cheering crowd, Kristin called Lana Parrilla to ask if they could release the video and let the crowd cheer for Lana as she held out her phone at the villains’ panel at Dragon Con.

Most interesting was the discussion about Maleficent’s baby daddy. At the end of season 4 we saw Maleficent finally reunited with daughter Lily (Agnes Bruckner) and they are on the search for her father in season 5. The panel ladies laughed about who the baby daddy might be and they discussed candidates Charming, Hook and other handsome lads.

The actresses then took some fan questions and one was for all of them asking who would their character like to hook up with – Charming or Hook? Before the question even ended, Ursula portrayer Merrin Dungey shouted “Hook” prompting crowd laughs then she laughed and asked if she answered too quickly. Kristin Bauer Van Straten said she couldn’t choose Charming since she knows his wife.

She then said that although she knows Hook actor Colin O’Donoghue is married, she’s not met his wife so can pretend she doesn’t exist so she wouldn’t feel guilty about choosing him. The best answer, though, was from Cruella portrayer Victoria Smurfit. She said “both please” and had the crowd howling. Smurfit was funny throughout and said she loved playing the bad, bad Cruella.

The ladies also hinted at action to come for Season 5 – we took their comments from the evil queens’ DragonCon panels and interviews plus our other sources to clue you in on what you can expect starting with the Once Upon a Time series premiere tonight. Read on for spoilers….

Zelena (Rebecca Mader) is powerless but will struggle to get them back even though we know she’ll wreak havoc once she gets her mojo back. We’ll also see new characters this season including Merlin (Elliot Knight), Guinevere (Joana Metrass), King Arthur (Liam Garrigan) and Merida (Amy Manson). But most important is that Emma (Jennifer Morrison) is the dark swan and is a force of evil – for the time.

We can expect Emma to be tanking hearts out of chests and being the worst she can be. Emma begged Regina (Lana Parrilla) to save her, but this will take time so Emma has time to do some awful things in the meantime. Mulan (Jamie Chung) is back this season as is Ruby (Meghan Ory) with some explanation as to why we haven’t seen these ladies in such a long time.

As season five opens, the usual characters including Emma’s mom Mary Margaret (Ginnifer Goodwin), Regina (Lana Parrilla), dad David (Josh Dallas), Hook (Colin O’Donoghue), and son Henry (Jared Gilmore) are assembled and committed to rescuing Emma from the Dark One curse. To do this, they embark on a journey to find Merlin who they believe can pull the Dark Swan out of her dark curse.

Show creators Adam Horowitz and Eddy Kitsis reveal that while most seasons have a two part story – one for each half of the year – this season won’t. Kitsis and Horowitz revealed that Emma’s journey as the new Dark One will carry through the entirety of Season 5. The co-creators also said we’d see Zelena’s baby with Robin Hood (Sean Maguire) during fall sweeps – in the November timeframe.

Another bomb is that we will see Mulan continue to explore her interest in same-sex coupling and she’ll have a GF sometime this season – could it be Ruby? And speaking of romance, Emma’s son Henry will also take time off his busy schedule of saving his mom to have his first crush and, oh yeah, hottie Sinqua Walls is back as Lancelot!

And no season of Once Upon a Time would be complete without Mr. Gold aka Rumpelstiltskin (the incomparable Robert Carlyle). Last we saw Gold, he was not awake, but when he does wake, it looks like we could see Rumple as he was before he took on the mantle of the Dark One – a kind man, but sort of a coward.

To find out more about DragonCon and buy tickets for the next event on 2016 Labor Day Weekend September 2nd through 5th, go to www.DragonCon.org and don’t miss tonight’s season 5 premiere of Once Upon a Time. It airs on ABC, Sunday September 27th at 8 pm. Tonight’s episode is called The Dark Swan.