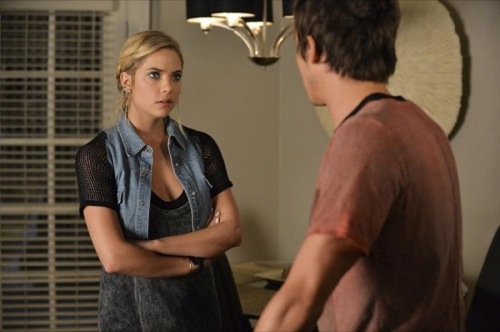 Pretty Little Liars returns to ABC Family tonight with an all new Tuesday January 20, season 5 episode 16 called “Over a Barrel,” and we have your recap below. On tonight’s episode, secrets are hard to keep, especially when you are keeping them from a loved one.

On the last episode, Toby’s new position in the Rosewood police department was to give the PLLs an upper hand on finally closing the door to Ali/”A’s” game. But when a surprising bit of evidence showed up, Toby was put in a difficult position with his job and with Spencer. Not one to trust the police or evidence “surprisingly” showing up, Spencer tried to convince Toby to stray from his moral gut reaction, which put stress on their relationship. Meanwhile, Emily and Aria took drastic measures to keep control of situations that were out of their hands and that could affect their future. Did you watch last week’s episode? If you missed it we have a full and detailed recap right here for you.

On tonight’s episode as per the ABC Family synopsis, “secrets are hard to keep, especially when you are keeping them from a loved one. Spencer searches for Mona’s missing laptop with Caleb’s help but where the search leads them could cross the “Toby approved” line. Aria tries to get up the courage to come clean to Ezra about her lie when she gets diverted by a possible goose chase. And Hanna is stuck in the middle having to cover Ashley’s secret when Pastor Ted returns with big news.”

The sixteenth episode of season five”s Pretty Little Liars is going to be really exciting and we’ll be recapping it for you right here.

Tonight’s episode of Pretty Little Liars kicks off with the liars at the coffee house, Spencer fills them in on the bloody knife that she and Caleb found in the woods and destroyed. Hanna reveals that she went to the trailer park to see Holbrooke’s dad – and he thought that she was Alison DILaurentis. Aria goes to pay for her coffee, and Emily rings her up at the cash register. The receipt begins printing out and the computer appears possessed. They realize that it is printing out the entire letter that Aria wrote to Ezra’s ex girlfriend Jackie so that she could get in to college. At the bottom of the receipt is a note from “A”, “This kind of lie will stay on your permanent record.”

Hanna heads home and is surprised to see Ted in the kitchen with her mom, he just got back from Peru. He says that he tried to call the night before but Ashley didn’t answer, she lies and say that she was asleep. Ashley corners her mom in the kitchen and lets her know that she saw Jason DiLaurentis leaving her bedroom. Ashley refuses to talk about and tells Hanna to take the orange juice outside.

At work, Emily is bickering with Ezra’s new chef over the coffee. Aria tries to talk to Ezra, but he gets a phone call and says he has to talk to the contractor and leaves. Ezra is too distracted arguing on the phone to listen to Aria. At Spencer’s house, Toby is trying to get her to open her college acceptance letters. Spencer is in tears because she got accepted to University of Hawaii, she explains that she applied to colleges that she doesn’t want to go to. The Hastings new tenant Johnny arrives to pay his rent – Toby leaves for work. Johnny is surprised to hear that Toby is a cop.

At the coffee house, Aria gets a text message, “Stop looking for me I am tired of hiding – H.” She thinks it is from Holbrooke and she is going to meet him at the grill at noon. Emily warns her that it is a bad idea. But, Aria is determined to meet with Holbrook because she thinks that he is the one threatening to tell Ezra about her letter to Jackie, and he is doing Alison’s dirty work. Meanwhile, at Spencer’s house she is getting an egg for Johnny out of the refriedgerator, she is shocked when her phone goes off and she has an alert from saying that she is “active.”

Spencer and Hanna rush to Caleb’s house to figure out the text message from Mona. HE reveals that it came from a security company that sends out alerts when her laptop is accessed. He gets the coordinates where her laptop is located – its supposedly at a storage facility out of town. They think Holbrooke is hiding there with the laptop that he stole from Aria. Meanwhile, Aria runs in to Jason DiLaurentis outside of the grill and he invites her to get something to eat with him.

Spencer and Caleb head to the storage unit, but the lock is unbreakable. They run in to their old teacher there – she tells Spencer that the 1017 storage unit stinks and she saw a blond girl there a few weeks ago.

Jason fills Aria in on his sister’s murder case, he says that Alison is capable of a lot and he knows that she can talk people in to anything. Jason reveals that the police have a theory, they think that Alison had help murdering Mona. Aria explains that they think Holbrooke is the one who has been helping Alison. Hanna goes to meet her mom’s boyfriend Ted, he wants her permission to get married to her mother and he plans to propose to her tonight at dinner.

Spencer and Caleb break in to the storage until by crawling through an air duct, they find Mona’s laptop laying out right in the open. Then there are bags of bloody clothes laid out in plastic evidence bags. They realize that Holbrooke must have stashed everything so that he can build a case against them. They find a hazmat suit and a huge barrel behind a sheet of plastic. They think that Mona’s body is in the barrel. Spencer recognizes the chemicals listed on the barrel and says that someone is either trying to pickle or dissolve Mona’s body.

Hanna rushes home and demands to know why her mother slept with Jason DILaurentis. Ted is upset that her mother is cheating on Ted and she thinks he is a really good guy and doesn’t want her mom to ruin her relationship with him. Spencer and Caleb leave the storage unit, Spencer is panicking because she is afraid they left traces of their hair or DNA in the room. They didn’t open the barrel because they thought it was a trap. They decide to break in to the storage unit’s files and try to find out who’s name the lease is in.

Aria shows up at Hanna’s house with a bouquet of flowers and says that she was ordered to deliver them to Ashely Marin. Hanna and Aria rush upstairs and Aria reads the card from Jason. Hanna lies and says that her mom didn’t sleep with Jason, and this is Alison messing with them. Hanna says that she visited Alison in jail and that is why she is harassing her mom.

Spencer and Toby lay in bed and play Scrabble – Toby is concerned about Spencer leaving for college and he doesn’t want to hold her back. Spencer says that Toby should come with her to Hawaii. She gets up to close the window and her phone goes off. Toby sees a text message from Caleb saying, “Found something, call me.” Spencer won’t tell Toby what she and Caleb are up to – he orders her to stop digging in to things that can get them all in trouble.

At Hanna’s house Ted gets down on one knee and proposes to Ashley, she panics and rushes out of the room. Ashley reassures Ted that everything is okay and her mom just needs some time to process, then she walks him to the door. After Ted leaves, Ashley cries to Hanna that Ted “deserves the truth.”

Emily stops by the coffee house to pick up her paycheck from Ezra, the new chef flirts with her and tells her that “casual looks good on her.” Johnny shows up at Spencer’ house for the egg that she promised him – he reveals that he has been reading about all of the murders in Rosewood online. Caleb heads over to Hanna’s house, he reveals that he was looking in to something and it took longer than he thought. He announces that the storage unit is rented in her name – and there is a good chance that Mona’s body is hidden inside of it.

The episode ends with someone in a black hoodie signing in to the Rosewood Police computer syster with Holbrooke’s name and password.