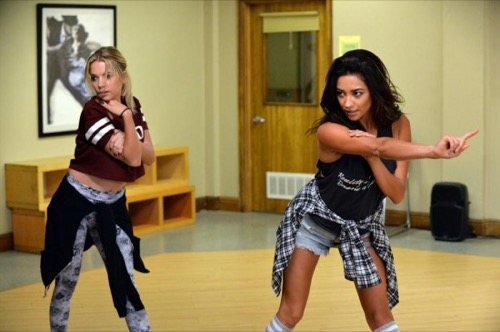 Pretty Little Liars returns to ABC Family tonight with an all new Tuesday February 17, season 5 episode 20 called “Pretty Isn’t the Point,” and we have your recap below. On tonight’s episode, Hanna [Ashley Benson] hires a coach to help with her beauty-pageant goals, and she also turns to Emily [Shay Mitchell] for guidance.

On the last episode, Senior high school students focused on their future college careers and felt the high pressured that came along with it, and Aria, Emily, Hanna and Spencer were no different. With a grade contingent acceptance, Aria needed to buckle down to improve her grades and looked to Andrew for some tutoring help. Also having college acceptance anxiety, Spencer decided to take a break and help Jonny with a new project. Hanna was doing just fine on her college acceptances but found out that she had been turned down for financial aid and turned to her dad to help. Meanwhile, Aria and the girls concerned about Mike increase after an incident at the school blood drive. Did you watch last week’s episode? If you missed it, we have a full and detailed recap right here for you.

On tonight’s episode as per the ABC Family synopsis, “Hanna hires a coach to help with her beauty-pageant goals, and she also turns to Emily for guidance. Meanwhile, Aria worries if Mike’s linked to Mona’s death, so she asks Andrew to keep an eye on him; and Spencer assists Jonny with an illegal activity.”

The eighteenth episode of season five’s PRETTY LITTLE LIARS is going to be really exciting and we’ll be recapping it for you right here.

Tonight’s episode of Pretty Little Liars kicks off with Aria, Emily, Spencer, and Hanna searching Mike’s bedroom for clues. Aria whines that it feels wrong ravaging through her brother’s stuff. Hanna reminds her that her brother just handed over test tubes of their blood to Ali’s friend Cyrus. They find a brand new necklace in Mike’s gym bag that he just bought – it has beads on it that say “I’m With You.” They are certain that it is a gift for Alison.

Emily heads to work and is shocked to see that Talia is on the phone with her mom – Talia reassures her that it is not that serious, Emily’s mom just called for a recipe for cobbler. Mike walks in to the coffee shop and Emily tries to tell him that they are closed. He refuses to leave, he says he needs two coffees to go. While Emily pours the coffee, Mike texts on his cell phone. Mike tells Emily that both of the coffees are for him because he “had a long night.”

Meanwhile, Spencer is having coffee with her neighbor Johnny. She receives a message from Emily saying that “Mike is getting scarier.” While they are having coffee Toby walks up, Spencer introduces him to Johnny and asks Toby what he is doing at Hollis. He says he is just picking up schedules for Jenna. Spencer tries to make plans with him but he says that he is busy – Johnny and Toby are clearly not fans of each other.

Hanna fills Caleb in on Mike, and the strange necklace that they found at his house. Hanna’s phone keeps ringing but she won’t answer it – Caleb demands to know what is going on. Hanna explains that she enrolled in a Miss Teen beauty pageant because she needs the $20,000 prize to pay for college. Caleb thinks it is a dumb idea and offers to get money from his mom in California – Hanna doesn’t want anyone’s help though. Caleb warns her that pageants are “Squeaky clean” and they could dig up some of her past.

Andrew comes over to Aria’s house to tutor her, she is distracted again because of the drama with her brother Mike. Aria asks Andrew to follow her brother Mike to the gym to see what he is doing. Mike storms out of his room and freaks out on Aria for going through his room. He screams at her that it is “none of her damn business” and if she touches anything else of his she is going to regret it.

Spencer and Johnny head in to an art studio – someone took their vandalism paintings off from the wall and broke them up and framed them. Johnny argues that they are his work and they can’t be sold. The art studio owner informs him that they were in a dumpster and on the way to the dump until he saved them, so technically they are his. Hanna meets with her pageant coach and she drills her with questions on current events. Hanna bombs them, so the instructor asks her what she plans to do for the talent section – Hanna says that she dances.
Emily is working at the Brew and Talia’s husband Eric drops by – he introduces himself to Emily, and says that Talia talks about her all of the time and she told Eric that she is dating Talia/ Emily explains that she didn’t know Talia was married – Eric says that he loves Talia and he will forever and Emily is just an “experiment or one time thing.”

Emily heads over to Hanna’s house to teach her how to dance – since Hanna has no idea how, and she is going to use it as her talent in the beauty pageant. Andrew meets up with Aria and tells her bout Mike in the woods behind Mona’s house, Andrew offers to take her back to the tree so she can investigate. He warns her that her brother is definitely up to something, and he doesn’t think that she should be home with Mike.

Emily and Hanna head to the dance studio so that they can train for the pageant, Caleb arrives with bad news – apparently Hanna’s evil step-sister Kate signed up for the pageant as well. After dark Spencer and Johnny break in to the art gallery to steal back his paintings since the owner has already sold one of them. They get all the paintings off the wall and rush out as the alarm goes off. While they are at a gas station afterwards Toby pulls up in his police cruiser – Spencer tells him that the paintings are Johnny’s but Toby doesn’t want to hear it. Spencer begs him to leave them alone as he arrests Johnny and puts him in the police car. Toby tells Spencer to walk away and explains that Tanner is trying to use his relationship with her to exploit him, and they can’t give her any information. Toby drives away with Johnny in the backseat, handcuffed.

Hanna’s pageant coach arrives to check in on her and Emily’s progress, Hanna ditches her and Emily’s routine and decides to try and impress the coach. It doesn’t work – the coach says that Hanna isn’t “pageant material” and leaves and says that it isn’t going to work out. Hanna storms out and Emily snaps at the pageant coach for being creul. The coach says that Hanna doesn’t have what it takes – but Emily does. Hanna overhears them talking and is devastated. Emily runs outside after Hanna and she leaves without her. Talia arrives and wants to know what is wrong – Emily says that she is done with her because she told Eric she was just a “one time thing and an experiment.”

Aria heads to the woods behind Mona’s house with a flashlight and climbs the tree to get the package that Mike left – she opens it and realizes that it is a vial of blood. Mike shows up and demands to know what she is doing, he tells her that it is Mona’s blood. Aria freaks out and drops the vial and it smashes, then she runs to her car and drives away and leaves Mike in the woods.

Johnny arrives at Spencer’s house, her mom went to the police station and bailed him out. He tells Spencer that his mom evicted him and he just came to borrow some packing tape. Spencer apologizes that Toby didn’t stick up for him or call the gallery owner and clear everything up. Johnny doesn’t want to hear it, he says he is cool with it and he can live in his car for a while. Before he leaves, he kisses Spencer.

Aria rushes in to her house and screams for her Dad – Mike barges in and says that he can explain. Mike swears that he didn’t hurt Mona, he says that a few nights before Thanksgiving he went to Mona’s house and surprised her and found that she had a refrigerator full of blood – her own blood. Mona told Mike that she was going to use her own blood to expose “A” and bring Alison down once and for all. Mona says that she has been talking to “A” and they have a plan to frame Alison for her murder and fake her own death. Mike cries to Aria that he doesn’t think Mona is safe, they were supposed to meet a bunch of times and Mona never showed up. Mike says that “A” played Mona, Alison wasn’t even in town the night she was killed – “A” had Cyrus take her out of Rosewood. Mike cries that he put the blood in the tree because it was all that he had left of Mona and he didn’t want Aria to find it.

Aria fills Spencer, Hanna, and Emily is on what happened with Mike. They realize now that Alison is innocent, and they had her arrested for Mona’s murder. And, they destroyed all of the evidence that could have proved Alison was innocent. They decide that they have to try and help her before she goes to trial. The episode ends with “A” dressed in a black hoodie going through Mike’s bedroom in the dark.