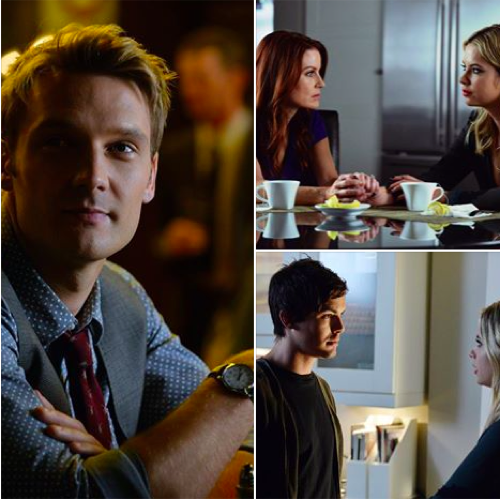 Pretty Little Liars returns to ABC Family tonight with an all new Tuesday March 10, season 5 episode 23 called “The Melody Lingers On,” and we have your recap below. On tonight’s episode, Alison’s [Sasha Pieterse] trial gets underway and her confidence is rattled as lies are exposed.

On the last episode, Ali considers a plea deal, but it incriminated someone else, so the girls tried to help her and Mike, as well as themselves. Elsewhere, Spencer unwinded while on a night out in London. Did you watch last week’s episode? If you missed it, we have a full and detailed recap right here for you.

On tonight’s episode as per the ABC Family synopsis, “Alison’s trial is about to begin and the once-confident Queen Bee is not so confident about her fate, as testimony reveals not only her lies but the lies of those close to her. Meanwhile, Spencer, Aria, Emily and Caleb search for information to clear the imprisoned Hanna following a string of clues that might have been left by Mona or possibly planted by “A.”

The twenty third episode of season five’s PRETTY LITTLE LIARS is going to be really exciting and we’ll be recapping it for you right here.

Tonight’s episode of Pretty Little Liars kicks off with Alison DiLaurentis and her father meeting with her lawyer – she is prepping Ali for her murder trial. Ali whines to her lawyer that she wants to speak to the jury and tell them what really happened. The lawyer reminds her that taking the stand will only hurt her case and all they have to do is convince at least one of the jury members that she is innocent. Meanwhile in another room Hanna is sitting in her orange jumpsuit and meeting with her mom and Ted, Ashley is convinced that Alison DiLaurentis is setting Hanna up.

At Spencer’s house, her mom warns her and Aria and Emily to stay away from Alison’s murder trial. Spencer’s mom Veronica makes her promise that she won’t go near the court room. Spencer snaps that the whole town knows they are friends with Alison and if they don’t go then it will look like they think Alison is guilty.

Spencer, Aria, and Emily head to The Brew and meet with Caleb – he has been trying to track down the number they found for Varjack on the pizza receipt. Caleb hasn’t had any luck tracking it down – it is a secure number. Spencer uses a burner phone to text Varjack’s number and see if he or she will respond, since they won’t answer their calls.

Spencer rushes out to track down Jason DiLaurentis – Jason won’t give Spencer the time of day. Spencer tries to plead with him that she thinks Alison is innocent. Alison’s father arrives and orders Jason to get in the car and get away from Spencer. He snaps at Spencer to stay on her side of the fence.

Aria visits Andrew and they make small chat about her brother Mike and the trial. Andrew rants that he is tired of everyone pretending that Mona was a saint just because she is dead. Aria is shocked that Andrew thinks the world is a better place without Mona.

At home later that night Emily receives a collect call from Alison at jail. Emily apologizes for not believing she was innocent before. Alison isn’t upset, she just wants to know if Emily is coming to her trial tomorrow. Emily is hesitant but promises her that she will be there to support her.

The next day Alison DiLaurentis’s trial kicks off, the prosecution leads and infoms the 12 jurors that Alison is about to lie to them and say that she was missing for two years and kidnapped. He goes on to say that Mona knew the truth about Alison faking her kidnapping, and the liars helping her pull it off – so Alison killed Mona to keep her quiet. Aria and Emily listen in on the testimony in shock. They rush out to the lobby to call Spencer and fill her in on what happened in court. Spencer thinks that the police must have found Cyrus – and he ratted Alison out for faking her kidnapping.

After court Alison heads back to prison and she and Hanna run in to each other in the laundry room. Alison fills Hanna in on the Varjack number, she says that after her mother was killed – “A” started putting ads in the classified section and said that they knew who killed her mom. Alison says that the Varjack number was Mona – she is sure of it because as soon as Mona died the text messages stopped. Later Caleb visits Hanna and she tells him all of the info that she got from Alison on the Varjack phone number. Caleb reassures her that they are going to figure this whole mess out and get her out of prison.

The next day at The Brew Aria’s phone rings – it’s the Varjack number calling her. They all argue over who will answer the phone, Caleb grabs it and says “hello.” No one is on the other end though – it’s a recording of soft music in another language.

The liars and Caleb call Hanna and play the song for her – she says that she recognizes it and Mona used to play it in her room all of the time. They realize that there could be more stuff hidden in Mona’s room that could help them clear Hanna and Alison’s name. Aria and Emily decide to go over to Mona’s house and talk to her mom and get in to Mona’s room and snoop around. There is no answer at the door so they leave – Emily whines that they are running out of time.

Later that night Jason stops by Spencer’s house, he apologizes to her for the way his Dad acted the other day. Jason calls Spencer out for the night that she and the liars trapped Alison when the police came for her instead of letting her run away. Spencer gets choked up and admits that she has a problem with admitting she is wrong – but she doesn’t think that Alison killed anyone. Jason grumbles that he has to testify against his sister tomorrow and storms off.

The next morning Spencer gets ready to go to the courthouse to watch Alison’s trial. Her mother forbids her from going but Spencer refuses to listen and storms out. In the courtroom the prosecution plays a video of a blond person attacking Mona in her house and dragging her down the stairs before killing her. Jason is on the witness stand – he admits that the day that Mona was killed his sister was not at home. Jason lies on the stand and changes his story – he says he doesn’t think the girl in the video could be his sister Alison. The prosecution reveals that Jason had an affair with Ashley Marin – and he is changing his story because Ashley and Hanna want him to clear the girls’ names.

After court Spencer, Emily, and Aria head to Mona’s house – they bang on the door again but there is no answer. As they are walking away – they head music coming out of Mona’s bedroom window, the same music that Varjack played when he called Aria’s phone. They break in to the house and Mona’s room has been ransacked, they find a note from “A” that says “Finders Keepers Losers Weepers.” Aria thinks it is a trick and “A” didn’t find anything in the bedroom either. Spencer picks up a mirror on Mona’s dresser and realizes that there is something inside it. She removes the glass and finds a cryptic note, “Chandelier’s rituals. Sister launched lair. A ruler’s list chained.” Unbeknownst to them, Andrew is standing outside and sees Emily’s car parked out front.

Aria heads to The Brew and runs in to Andrew – he apologizes for what he said about Mona earlier, he doesn’t think that she deserved what happened to her. Aria tells him that it is water under the bridge – he kisses her on the cheek and tells Aria to call him before he leaves.
Ashley Marin heads to the prison to visit Hanna, she is still upset about her affair with Jason being outted to the entire court room. Hanna jokes that everything will be okay and she will survive prison – maybe she can write a book like Martha Stewart did. Next door Jason visits Alison, she tells her brother to get out of town now and save himself before he winds up dragged down with her. Jason reassures Alison that he knows she is innocent and she didn’t kill Mona.

Spencer is at home reading the weird note she found at Mona’s house over and over, trying to make some sense of it. At The Brew Emily is cleaning and closing up shop. She sits down at the recording table that Johnny made for people to record their secrets. She listens to people’s confessions and laughs – until she hears the song playing again that was in Mona’s room.
Tonight’s episode ends with “A” cleaning out his lair and shredding papers, including Paul Varjack’s social security card.