Pretty Little Liars Season 5 Finale Recap: ‘A’ Is [Spoiler] – “Welcome to the Dollhouse” 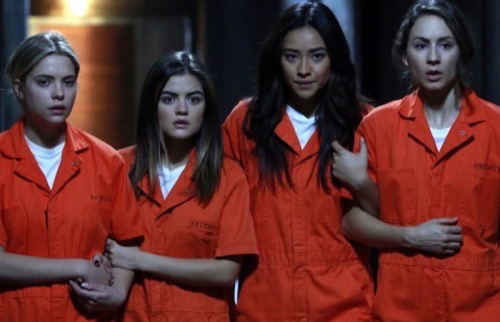 Pretty Little Liars returns to ABC Family tonight with an all new Tuesday March 24, season 5 finale called “Welcome to the Dollhouse,” and we have your recap below. On tonight’s episode, in the fifth-season finale, “A” seeks a playdate with the girls, and a huge clue about “A” is revealed as secrets are exposed.

On the last episode, Alison’s trial got underway and her confidence was rattled as lies were exposed. Meanwhile, Hanna’s friends tried to free her by investigating clues left by either Mona or “A.” Did you watch last week’s episode? If you missed it, we have a full and detailed recap right here for you.

On tonight’s episode as per the ABC Family synopsis, “A” has always had fun playing with Aria, Emily, Hanna and Spencer, but now “they” have the biggest game to date in store for the girls. As shocking secrets come to light and the biggest clue to the “A” mystery is revealed, is this one plAydate the Liars can survive?”

The finale episode of season five’s PRETTY LITTLE LIARS is going to be really exciting and we’ll be recapping it for you right here.

Tonight’s episode of Pretty Little Liars kicks off with Hanna, Emily, Spencer, and Aria in orange jumpsuits in the back of a truck – they are being transported to a different prison and being separated from Alison DiLaurentis. Hanna gives them a rundown on how to survive behind bars, she warns them that everyone will treat them like criminals, even though they are innocent. They vow that even if they are separated, they will still be in each other’s hearts. Suddenly the truck that they are riding in crashes. Someone in a black hoodie opens the door and shoots a smoke bomb at them, they can’t see anything.

Toby pays Spencer’s parents a visit and breaks the news to them that Spencer and the other girls are missing. Spencer’s mom thinks that it has Mona written all over it – and she isn’t certain that she is dead. Toby warns Spencer’s parents that no one knows the liars were kidnapped, not even the other parents – they have to keep it a secret. Detective Tanner doesn’t want the press getting wind of what happened.

Meanwhile, the liars are waking up in a strange house – someone has made exact replicas of their bedrooms and they are locked inside them. In Hanna’s room she begins panicking and trying to get the door unlocked, but it isn’t budging. Emily notices that there is a camera set up in her room and someone is watching her. A loudspeaker comes over their rooms and a woman’s voice says “please exit your room and follow the lighted passageway.” Their bedroom doors swing open and the liars all rush out in to the hallway and bump in to each other. Spencer says that they are “trapped inside A’s dollhouse.” They follow the dark hallway to a room where someone is sitting down and playing the piano – they have blond hair and are wearing a plastic Alison mask. The person at the piano removes the mask and reveals that she is…Mona, and very much alive – and she is wearing the yellow shirt that Ali was wearing the night she went missing. The liars are shocked, and ask Mona if it is really her. Mona scoffs, and she says “It’s me Alison.”

She tells the liars to sit down and have tea with her – and she continues talking like she is Alison. Hanna calls her Mona again and she snaps at her to stop, and reminds her how much she “loathes that bitch.” A doorbell rings and Mona leaves the room, the liars follow her and are obviously confused. They follow Mona in to another room and she sits down with a boardgame. She tells the liars to sit down and says that “four chimes means game time.” Hanna realizes that they are playing the game to find out which guy will be their date to prom, she screams at the cameras that she isn’t playing the stupid game. They decide to find a way to escape and a loud alarm begins going off and hurting their ears – Mona tells them it will stop when they get in their rooms. The liars and Mona all rush to their rooms and the doors slam and lock behind them, the alarm turns off.

Later that night Hanna is sleeping in her room when Mona barges in – she orders Hanna to get up and tells her that they have three minutes while the generator powers down and restarts. There is no electricity, so the locks on the doors don’t work and “A” can’t see them on the cameras. Mona gets the liars up and rambles in 90 seconds to the liars about what doors lead to what rooms and where there is a vault – but she can’t get inside. Mona reveals that “A” is making her pretend to be Alison, and she is going along with it or else she won’t get any food or water. Their three minutes are up and the liars rush back to their rooms before they are locked out.

At prison Spencer’s mom and dad visit Alison – Peter Hastings demands to know where Spencer is, Alison is shocked. She had no idea that the liars were kidnapped. Spencer’s dad threatens her that if she lies to them right now, he will see to it that she doesn’t survive in prison. Alison says she has no idea where Spencer and the other girls are – but she says that Mona is “A”. Peter and Veronica say that is not possible because Mona is dead. Alison explains that the “A” game started again when Mona was in Radley, and the new “A” killed her mom and Mona.

Meanwhile at the doll house, the liars and Mona are back in their rooms and in bed. “A” is watching them sleep on computer monitors. Spencer lays in bed and remembers a set of blocks that was in the game room – she scrambles the letters around in her head until she realizes that it is a monogram for the name “Charles.” She sits up in bed and whispers, “It has a name.”

The next morning Mona wakes up and there is a present for her, and it is addressed to Alison. She opens the box and finds a gas mask inside with a card that says “Because you are my favorite.” Toby, Caleb, and Ezra spent the whole night trying to figure out who stole the girls. They figure out that “A” hacked in to the truck’s computer and took over, causing them to crash. Toby tries to tell Tanner, and she puts a warrant out for Caleb – she says that the only person with that technical savvy skills was Caleb. She thinks he helped the liars escape. Toby heads back to his apartment and warns Caleb that the police are coming, Spencer’s parents show up and demands that the guys tell them what is going on. Ezra gives them all of his boxes of research on “A” and warns them that their secrets are in there too.

At the doll house, the liars and Mona are sent to the basement. They learn that “A” is throwing a prom for them, the theme is “Phantom of The Opera.” Spencer realizes that they are actually recreating a prom at Rosewood that happened seven years ago – it was Melissa and Ian’s prom. Spencer shouts at the cameras that they can’t decorate for prom with contruction paper and tape – she gives “A” a list of supplies. If “A” delivers the supplies, then Spencer plans to use them so that she can build a machine that will shut down the electricity so they can make a getaway and the doors will be unlocked and the cameras wont work. The next day the girls head back down to the basement, and the supplies that Spencer asked for are there waiting for her.

Caleb heads to the police station with both of Spencer’s parents as his lawyer, Caleb insists that he has no idea where Hanna and the other lairs are. They manage to convince Tanner that the girls didn’t run away – they were kidnapped. Tanner lets Caleb use their computer system to track the van that the girls were taken from. He gets a possible location on the missing van, and Tanner radios out for the police.

It’s time for the liars’ prom – they put on the dresses that “A” gave them and head down to the basement, it’s completely decorated and full of manequins to make it seem like a real prom. Music begins playing and a disco ball begins spinning. What the liars don’t realize is that one of the mannequins is alive…and it is “A”. Meanwhile, Tanner and the cops find the van and it is empty – she orders them to spread out and search the property.

Suddenly the music stops and a voice says over the loudspeaker, “Please welcome your prom Queen, Alison DiLaurentis.” Mona makes her way down the stairs in her Alison mask. The liars call out for Charles and tell him that he should be crowned the king. “A” begins to walk towards them and they put their plan in to motion – they trigger the machine that Spencer built and all of a sudden the electricity begins sparking and the lights turn off. The liars make a run for it.

Outside Spencer’s mom recognizes where they are – it’s the old Campbell farm, as in Andrew Campbell. Toby and Tanner find a door in to the basement and find that it is filed with computers and TV screens – Toby realizes that they just found A’s lair. Spencer finds a room with a movie playing – it is of Alison’s mom holding her when she was a baby. There are two little blond boys, she tells them to kiss her little sister. Alison had twin brothers!

The liars and Alison make a run for it and they make it outside, but they are still fenced in and can’t get off from the property. A record player is playing a song over the loud system, a man is singing “Don’t fence me in.”