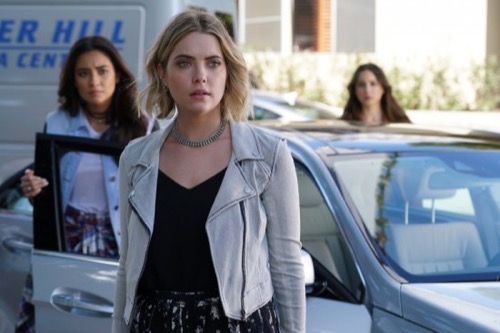 Pretty Little Liars returns to ABC Family tonight with an all new Tuesday June 23, season 6 Episode 4 called “Don’t Look Now,” and we have your recap and spoilers below. On tonight’s episode, Kenneth [Jim Abele] reveals info about his family’s link to Charles and shares a clue about Charles’ [Charles Carpenter] past, which leads the girls to Radley Sanitarium. Meanwhile, Caleb’s [Tyler Blackburn] overprotectiveness irks Hanna; [Ashley Benson] and Spencer [Troian Bellisario] wants to cure her sleeping problems.

On the last episode, the girls may have had gotten out of the Dollhouse but what happened to them during their time of captivity had lasting effects. With worried loved ones watching over them, the PLLs were home and trying to heal, with not much success. Even with suspected tormentor Andrew in custody, Aria, Emily, Hanna and Spencer fear they are far from safe. Did you watch the last episode? If you missed it, we have a full and detailed recap right here for you.

On tonight’s episode as per the ABC Family synopsis, “after lying to Alison and Jason about Charles, Kenneth comes clean about the family’s connection to the young boy. While he won’t give much detail about Charles’ past, he say’s enough to give the PLLs a clue of where to look for the missing pieces – Radley Sanitarium. With Radley now closed and the files shipped off to be shredded, the girls must act fast before all traces of Charles’ past disappear.”

The next episode of season six’s PRETTY LITTLE LIARS is going to be really exciting and we’ll be recapping it for you right here.

Tonight’s episode of Pretty Little Liars kicks off with Alison and Jason talking to their Dad – he reveals that Charles is their brother. He was born 15 months before Jason. Apparently, he was dangerous and unhinged at an early age – their parents were scared he would hurt Alison and Jason, so they had him admitted into Radley. Jason and Alison can’t believe that they lied to them and didn’t tell them about Charlie. Alison realizes that Charlie is “A,” and he is the one who kidnapped her and framed her. Her dad tells her that isn’t possible – Charles is dead.

Alison visits the liars and fills them in, then she reveals that Charles can’t be “A” because, apparently, Charles is dead – he killed himself when he was only 16 years old. He overdosed on pills and Mrs. DiLaurentis had him cremated. The liars aren’t believing it, there is no body, no grave, and no proof that Charles is actually dead. Alison argues that her Dad isn’t lying. Spencer points out that “A” responds to the name Charles, and the home movie of Charles means a lot to him. The liars and Alison decide that they have to find proof that Charles is really dead.

Hanna heads home and Caleb is there waiting for her. He is going to spend the night. At Emily’s house, the next morning, her mom says that she got a meeting with Dr. Sullivan for Emily and Sara – they are both going to see her. Sara obviously doesn’t want to go. Emily’s mom tells her that whether Sara goes or not – she has to. At Aria’s house, Aria is on the internet searching for proof that Charles is dead. Her Dad interrupts her and asks her about her photography. Apparently, Detective Tanner called and talked to Aria’s dad – now that Andrew has been released, they need to talk to the police about being kidnapped. Aria argues that she just wants to move forward and get on with her life, she doesn’t want to talk about what happened.

Hanna wakes up and finds Caleb sitting at the window – he didn’t sleep all night. Caleb is worried about her, because “A” is still out there. He heads outside to talk to the police that are watching Hanna’s house. He doesn’t think that they are doing a good job. At the coffee shop, Spencer is on a mission and trying to find out if Charles is really dead. She learns that all of the files from Radley are at a shredding facility and will be destroyed soon. Ezra interrupts and sits down with Spencer. He wants to make sure that she is doing okay after the kidnapping. Ezra tries to convince Spencer to talk to the police. He thinks that she and the other liars can help the police catch “A” for good. At the coffee shop someone dumps a glass of red juice on the floor, Spencer has a flashback of herself covered in blood when she was being held prisoner.

Spencer fills the other girls in on the Radley files. Aria confesses that she is still on edge since they got home – she threw away the pills that the doctor gave her because they made her sick. Spencer tells the liars she will meet them at The Brew, then she sneaks over to Aria’s house and goes through her garbage and searches for the pills.

Spencer meets up with the liars and they head to the shredding facility to see if Charles’s files from Radley are still there. They sneak in to the warehouse and begin searching through thousands of files for his. Spencer has another flashback of herself covered in blood. Aria finds a file for Charles between the ages of 13-16, but it doesn’t say anything about him dying; however, they do learn that the doctor prescribed him Zoloft for depression and the only two people who visited him were Alison’s mom and Alison’s great Aunt Carol – who is also dead.

The liars leave the data center and head home – Caleb is furious because he put a tracker on Hanna’s car and followed her to the data center. Aria heads home and her dad is freaking out because she didn’t answer her phone, he thought something horrible happened to her. Emily arrives at home and her mom corners her. She is upset because she found Sara standing on their roof. She thought she was going to jump, but Sara insists she was just looking at the sunset. Emily wants to call Sara’s mom or check her into the psych center. Sara overhears them talking about her. Spencer heads to The Brew and tries to buy weed form a girl named Sabrina who works there and has a prescription. Sabrina feels guilty because of what Spencer has been through and she agrees to just give her some weed for free tomorrow. In the morning, Emily wakes up – and Sara is gone.

Alison fills Jason in on the file that the liars found – he is shocked when he hears that their Aunt Carole was visiting Charles. Jason confesses that when he was on the run he went to their Aunt’s house after she died because he thought it was empty and he was going to hide there. But, when he got there – his mom was there and fixing the flower bed. She wouldn’t let Jason inside the house, and he could hear someone in there. They think that Charles might still be hiding out at their Aunt Carol’s house. Jason, Alison, Hanna, and Spencer head to their Aunt Carol’s house to investigate. When they arrive the house appears abandoned and the electricity has been turned off.

Aria heads to the photo dark room at Hollis to develop some of her pictures. She finds a note from “A” that says, “You’re my doll.” Aria has a flash back of “A” cutting her hair off when she was being held hostage. She panics and tries to get out of the dark room, but someone has locked her inside. One of the students at Hollis hears Aria screaming and lets her out. He says that someone put a wedge in the door and that was why she got stuck in side – he introduces himself and says that his name is Clark.

Alison, Jason, Spencer, and Hanna are still searching Carol’s house – Spencer goes outside in the dark and has another flashback of herself covered in blood. She cries to Hanna that she could barely sleep when they were being held hostage. She finally fell asleep after days and when she woke up she was covered in blood. Then she fell back asleep and the next day the blood was gone. Hanna tries to comfort her and tells Spencer that it had to be fake blood, it was just one of Charles’ mind games. Spencer isn’t convinced – she thinks that she might have actually hurt someone and she blacked out and didn’t remember. They hear Alison shouting. They rush towards the woods and find Alison and Jason standing over a headstone.

Hanna thinks that it is fake and Charles planted it there. She grabs a shovel and starts trying to dig up the coffin. Jason shouts at her to stop. He shows her the tree roots growing around the headstone – there is no way someone just out the grave there to throw them off. The roots have been growing on it for years. Now they are back to square one, if Charles isn’t “A” – then who is? Spencer is certain that Charles is the key to it, she thinks that whoever “A” is, is someone who is stealing Charles’s life – and someone that he met at Radley.

Meanwhile, Emily takes Sara to the school pool on the middle of the night. They play a game and see which one of them can hold their breath under the water the longest. Sara thanks Emily for everything she is doing for her – no one has ever looked out for her before. Aria heads home after she is done at the studio, her dad is still hovering over her. Aria decides to show her Dad some of the pictures that she has been taking. They are of her bedroom. She explains that the room she was held hostage in was a replica of her bedroom at home – only there was no way for her to get out.

Hanna heads home and Caleb is sitting in the kitchen waiting for her – he demands to know where she was. He brought a bag of clothes. Hanna’s mom says that he can move in for a while. Hanna yells at Caleb that he is suffocating her, and she needs space – she feels like she is being held hostage all over again. Caleb clearly isn’t happy about it, but he leaves.

Spencer heads to the coffee shop and runs into Ezra. She says that she just stopped by to pick up some “cookies” from Sabrina. Ezra isn’t stupid. He knows that it is weed – he warns her that it isn’t a healthy coping mechanism. Spencer shouts that she can’t sleep and she needs something to “quiet the noise” before she storms out.

Alison heads home and her dad is waiting up for her. She admits that she went to her Aunt’s house. Alison’s dad tells her that he wants her to know the truth. When she was just 11 months old, her dad left her in the crib and went outside to cook on the grill. When he came back inside, he heard Alison screaming. He rushed to the bathroom and found that Charles had put Alison in the bath tub and began filling it with scalding hot water. Alison shouts at her dad to stop, she doesn’t want to know – she thinks they should let Charles rest in peace.