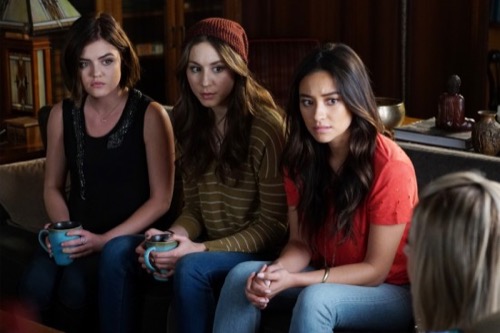 Pretty Little Liars returns to ABC Family tonight with an all new Tuesday July 28, season 6 Episode 8 called “FrAmed,” and we have your recap and spoilers below. On tonight’s episode, Aria’s (Lucy Hale) art is put on display in a gallery, but the event showcasing her work gets sabotaged by “A.”

On the last episode, there were mixed emotions in the DiLaurentis household when Charles declared he was coming home for his birthday. Mr. DiLaurentis wanted to quickly get out of town to hide Ali and Jason from their brother, while Jason saw this as an opportunity to finally validate all of the early childhood memories he had of “Charlie.” The PLLs were just as split with Spencer and Hanna seeing this as the best chance they have to capture Charles, while Emily and Aria wanted to stay as far from him as possible. Was Jason reunited with his brother, or was this just another of “A’s” traps? Did you watch the last episode? If you missed it, we have a full and detailed recap right here for you.

On tonight’s episode as per the ABC Family synopsis, “after their latest run-in with Charles, tensions are at an all-time high with the PLLs and the town of Rosewood. Aria’s big moment of seeing her work displayed in an art gallery is in jeopardy as Ella is determined to keep her safe at home. Hanna is still uncomfortable with the unexpected scholarship money and is determined to give it back, even if that means ruining her chances at going to her school of choice. And to top it off, the one normal high-school rite of passage the girls are looking forward to is in danger as Rosewood High is considering not letting the PLLs attend prom due to security issues.”

The season 6 episode 8 of PRETTY LITTLE LIARS is going to be really exciting and we’ll be recapping it for you right here.

Tonight’s episode of Pretty Little Liars kicks off with Aria, Alison, Spencer, Hanna, and Emily watching the news – the police have named Charles DiLaurentis as their kidnapper and they are searching Rosewood for him. They also think that Charles may be responsible for his mother’s murder. Alison doesn’t believe it, he remembers when she met Charles at the arcade – he wasn’t vicious, he shared his frosting off his cupcake from him. Hanna snaps at Alison, she can’t believe that she is pitying Charles – he has been out for blood and tried to kill all of them more than once.

Hanna heads out with her mom, she argues with her that they can’t take the scholarship from the Carissimi Group. Hanna knows that the money came from Charles DiLaurentis. Hanna’s mom Ashley says that they aren’t giving the money back until they talk to Alison’s dad Kenneth. They head to his office, and it is surrounded by reporters.

Aria meets up with Clarke, the photography student she met at The Brew. He can’t believe that she and her friends tried to capture Charles themselves, he asks her a ton of questions and Aria snaps that it was scary and she doesn’t want to talk about it anymore. Clarke shows her an invitation for the gallery show where she submitted her work, they even used one of her pictures on the invitation. After Clarke leaves, Ezra arrives at the table. He thinks that Clarke is nosey and he is asking too many questions about Charles. Aria complains to Ezra that her mom won’t let her go to the gallery show later that night. Ezra offers to accompany her, but Aria says that she is going to ask Tanner to send a cop car with them.

At her house Lorenzo is visiting Alison, she rants that her dad is “shutting her out” and he won’t talk to her because he is mad that she called the cops and told the all about Charles. He has been at the police station ever since and answering tanner’s questions. Alison thanks Lorenzo for coming to the arcade and saving them, his arm is still in a sling from getting hurt during his scuffle with Charles. Alison made Lorenzo some soup, he thanks her and tries to kiss her – but Alison backs away.

Hanna is at Spencer’s house ranting about the scholarship that she doesn’t want – she is certain that it came from Charles. Spencer has a plan, if they close her college account then they will have a reason to go to the office, to return the money. Meanwhile, Tanner is at Aria’s house – she tells Aria’s mom that she will send a police officer with her to protect her. Aria pleads with her mom to let her go to the art gallery, she reminds her of how important it is with her. Tanner reassures Aria’s mom that she will be in good hands.

Emily comes over to help Aria pick out a dress to wear to the art show, she invited all of the liars. They discuss prom, the school might not let the liars go because it is a “safety issue.” Emily admits that if they do go to prom, she wants to take Sara as her date. Meanwhile, Hanna and Spencer head to the Carissimi Group office, they wait in a man’s office named Rhys Matthews. He finally arrives and Hanna and Spencer are shocked, Rhys has blond hair, blue eyes, and appears to be the same age that Charles is. It is obvious that they both think he is “A”. Back at Aria’s, she and Emily are gossiping about Sara and her and Emily’s first kiss. Aria thinks that Emily should take it slow, Sara was kidnapped for so long – she never has even been to a high-school dance. Emily thinks that Aria should as Clarke to prom.

Hanna and Spencer are explaining to Matthews that she changed her mind and she doesn’t want the scholarship. Spencer asks a ton of questions about the Carissimi Group, but Matthews isn’t exactly forthcoming. He says that they select their scholarship winners based on personal connections, and there is no way that they can meet Mr. Carissimi. When they leave, Hanna and Spencer both agree that Matthews looks like a DiLaurentis.

Hanna and Spencer arrive at the art gallery – it is crawling with undercover cops. Hanna can’t wait to show Aria the picture of Matthews that she took on her phone, Spencer orders Hanna to wait to show Aria until after her show is over. Emily sees the photo on Hanna’s phone and mistakes Matthews for Jason – that is how much they look alive. Unbeknownst to all of them, “A” and Red Coat have been staking out the art show via the security cameras.

A woman takes the podium to hand out the awards for the night, after a brief speech the woman announces that Aria is one of the finalists – only the picture hanging under Aria’s name is not one that she submitted. It’s a picture that Charles took of the four liars when he drugged them and put them in the morgue – they appear dead in the picture and are covered up with white sheets. People in the audience gasp at how gruesome and disturbing the picture is. Aria’s mom is furious, she rants that Tanner told her the girls would be safe. She reassures Ella that they are dusting for fingerprints, she orders them to give their statements to the officers and head home.

Meanwhile, back in Rosewood, Alison stole Lorenzo’s badge while he was sleeping, she uses it to sneak in to the police station. While Hanna, Emily, and Spencer are getting ready to leave the gallery they spot Matthews sitting in his car across the street. They hop in Spencer’s car and decide to follow him to see if he leads them to his mysterious boss.

At the police station Alison slips in to a room that is covered in whiteboards and timelines with photographs about their kidnapping, Charles, and her mom’s murder. She finds a box full of evidence bags and begins going through it. Tanner walks in to the room and catches Alison in the act – she informs her that she has “crossed a line.” Tanner shuts the door and locks it, Alison explains that she has questions about her brother. Tanner is furious, she says that Alison jeopardized their entire investigation. Alison finds a baby battle that used to be her’s in the box – Charles had it in the bunker. Tanner explains that her brother is a murderer, and it is a token he kept after he tried to kill her when she was a baby.

Hanna, Spencer, and Emily follow Matthews to an abandoned building. They wait and watch as he goes inside, a few minutes later another car pulls up – it’s Aria’s friend Clark! Emily texts Aria to warn her about Clark. Alison heads back to Lorenzo’s apartment, he is furious that she stole his badge – he thinks that Alison has been playing him all along. Now, he has to face the disciplinary committee and he could lose his job.

Ella shows up on Hanna’s doorsteps in tears, she cries that they have to find a way to protect the girls because the cops aren’t doing enough. Meanwhile, Red Coat is outside of the kitchen window listening in on their conversation.

Emily, Spencer, and Hanna show up at Aria’s house – they break the news to her abut Clark. They saw him at the abandoned doll factory meeting with Matthews.

Tonight’s episode of PLL ends with “A” loading something in to their trunk, a bag with six syringes inside of it – and he has tickets to the liars’ prom.