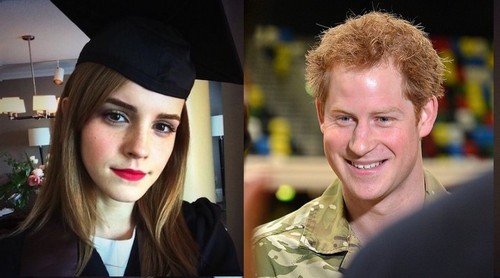 Is Prince Harry dating Emma Watson? Has Harry moved on from D-listed nobody Cressida Bonas to the top of the A-list? Is the fourth in line to the British throne dating the beautiful Harry Potter actress? That’s the latest rumor floating around about the prince, and there is no doubt that fans of both Prince Harry and Emma Watson would be thrilled to see these two gorgeous people together! The rumors about the potential couple began popping up earlier this week, and fans are dying to know if they are true.

Emma Watson sent out a cryptic tweet on February 22, which looked to be addressing recent excitement about her and the prince: “WORLD. Remember that little talk we had about not believing everything written in the media?!” Unfortunately there have been others who have spoken out against the rumors that the two are a couple. According to Us Weekly, a friend of Prince Harry’s made a statement claiming that the stories about the prince and Emma Watson were untrue. “[It’s] fake. It’s such a random story.”

The last person Prince Harry was seriously romantically linked to was British actress, Cressida Bonas, and the pair broke up last April after dating for two years. Emma Watson recently split from her boyfriend, Matthew Janney, in December, and created buzz that same month about a possible romance with One Direction’s Harry Styles when he presented the stunning 24 year old actress with an award at the British Fashion Awards in London.

So, it looks like these rumors about Prince Harry and Emma Watson might only be rumors. But it sure is fun to imagine what these two amazing people would look like together! Would you love to see these two as a couple? Let us know in the comments below!