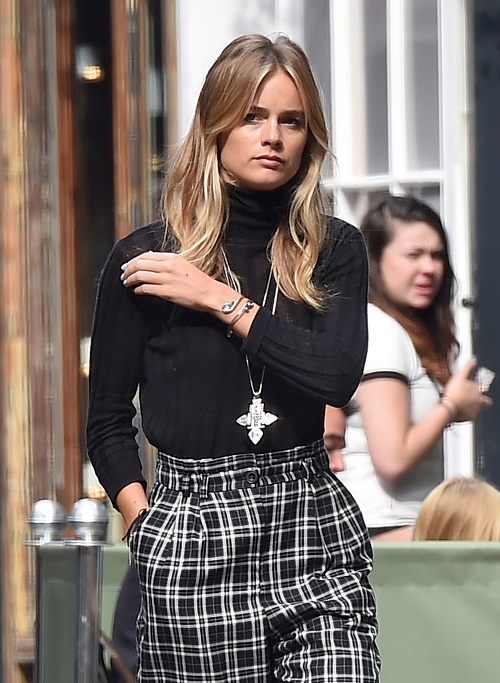 On Friday, February 6, Prince Harry’s ex-girlfriend, the gorgeous Cressida Bonas, partied with the stars at Harvey Weinstein’s BAFTA dinner, proving that she is doing just fine without the ginger prince! The 25-year-old looked stunning in a slinky, silk and black mesh getup.  According to DailyMail, the English starlet mingled with Hollywood’s A-list actors and actresses including Dominic West and the BAFTA nominated Benedict Cumberbatch and Keira Knightley. Bonas, who split from Prince Harry after two years together, is now rumored to be dating actor Freddie Fox and she seems to be right at home among Hollywood royalty!

The aspiring actress’s star has been on the rise, and she only seems to be moving up in the entertainment world. She recently sparked interest when she played the role of a male wolf in Tallulah Brown’s play There’s a Monster in the Lake, and has caught the attention of none other than Harvey Weinstein himself, who cast Bonas in the upcoming film adaptation of Tulip Fever. In addition to her flood of acting roles, Bonas has also become the muse of the brand Mulberry, according to Femail.

With her eye-catching looks, dancing and acting talent, and aristocratic background, Bonas was thought to be the perfect match for the fourth in line to the British throne and it was shocking to many that their relationship seemed to fall flat. But, judging by her recent hobnobbing with the stars and her romantic link to a well-known British actor, she seems to be doing better than ever! Prince Harry has been seen out with a handful of women, but has not been seriously linked to anyone since his breakup with Cressida. Could he possibly be regretting the breakup?

What can be said for certain is that Cressida Bonas has been quickly rising in the ranks of Hollywood. If she continues to get acting roles at the rate she has been, we can definitely expect to see more head-turning appearances from the blonde beauty, with or without Prince Harry!