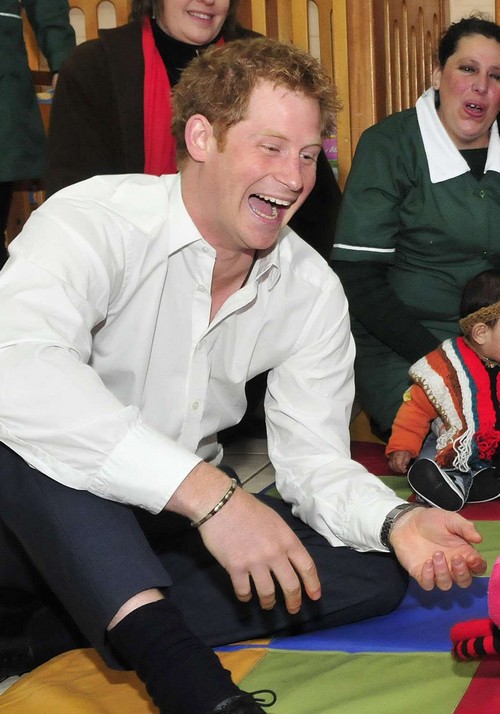 Prince Harry is dating German model Anastasia Guseva following his split from aspiring actress Cressida Bonas, 25, in April 2014. Prince Harry has wasted no time and decided to embrace the single life full force, not that he’s ever deprived himself of wine, women and song. Last November, the dashing prince turned on the charm at an exclusive lavish yacht party in the United Arab Emirates – check out photos here at Radar. The Prince, 30, was in Abu Dahbi for the Formula One Grand Prix, but the fun certainly didn’t end at the tracks. At this waterside gathering, Harry was photographed chatting up a beautiful, blonde German model. In these pictures, the model in question, Anastasia Guseva, is seen giggling at whatever the royal charmer is saying. “He was clearly very taken by her and kept touching and stroking her and they danced very closely,” a source told the U.K.’s Sun newspaper. It was also reported that as the bash was dimming down, the Prince allegedly left with Guseva and some pals in tow around 4:30 am. “The two groups left together with Harry looking very happy with himself,” an onlooker revealed. “Sounds like the Prince is smitten!”

Cressida and Harry dated for two years, but it seems as if neither of them are shedding anymore tears even though Star Magazine reported the reasoning for the split was that of Prince Harry being an alleged royal cheater. Since their split, Cressida Bonas too has her eyes on something new, a part in film director Harvey Weinstein’s new production, Tulip Fever. I doubt Harry will catch it because these days he’s obviously more into print media! Anastasia Guseva is a German born beauty who is contracted with the agency ModelÔme. She can be seen in many magazines and fashion campaigns.

Whatever the circumstances, we wish Prince Harry and his new flame, Anastasia Guseva, all the best in their budding romance!