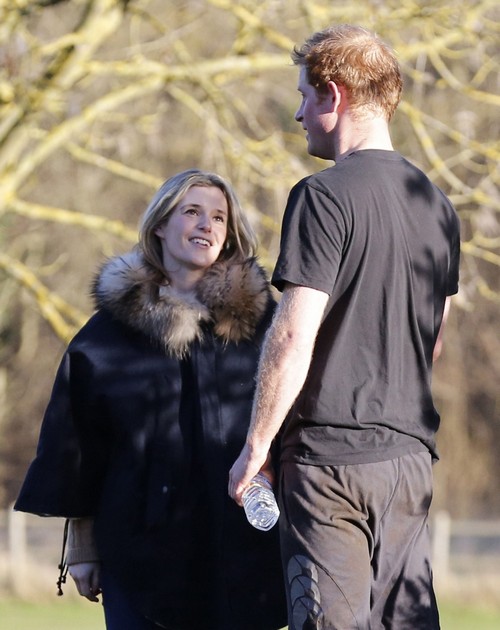 Royal scandal is brewing! Photos captured Prince Harry flirting with a mystery blonde woman at his Christmas Eve charity football match in Norfolk, practically in his grandma Queen Elizabeth’s backyard! Now Prince Harry has a wicked reputation with the ladies earned by dating and bedding a series of hot British ladies, none of whom have met the Queen Elizabeth’s approval! Of course Harry doesn’t seem to be minding the delay in getting married and starting a family as is expected of him by The Queen.

Prince Harry was by all reports close to becoming engaged to Cressida Bonas but two factors doomed that relationship: 1) Cressida Bonas decided to go Hollywood and used her connection with Harry to gain traction by bartering who she knew for a role in a Harvey Weinstein movie production, Tulip Fever. The moment Queen Elizabeth learned that Cressida was under the false impression that she could have Harry AND a film career she ordered her grandson to end the relationship. Harry and Cressida tried hooking up again on the sly this past autumn but Elizabeth found out and forced Harry to break it off for good with the famewhore. 2) Prince Harry couldn’t keep his royal jewels in his royal pants.

After Prince Harry finished with Cressida rumors emerged that he was once again seeing old girlfriend Chelsea Davy, a woman not on the royal approved list, but The Queen make quick work of that attempt. In between these trysts Harry was dating Camilla Thurlow who was rumored to be an acceptable choice but somehow that fling never panned out.

So today, Christmas Eve, we see photos of Prince Harry with a new lady, a mystery blonde – once can only imagine the hiding he will get once Queen Elizabeth finds out! Yes, ever since Prince Charles was caught on camera cheating on Princess Diana with Camilla Parker-Bowles her Highness frowns on such clandestine meetings!

British Royal Prince Harry chats with a mystery blonde after playing in a Charity Football Match on Christmas Eve in Norfolk, England on December 24, 2014. Could this be a sign Harry’s on/off relationship with Cressida Bonas is over again? By FameFlynet