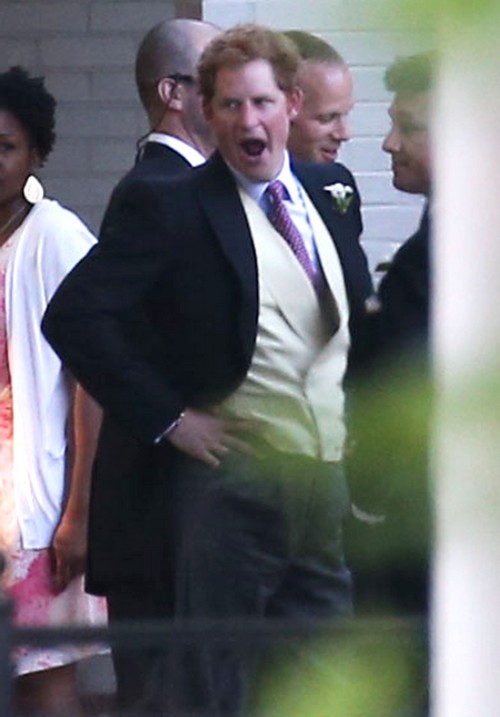 Well, that didn’t take long, did it? Almost immediately after splitting up with girlfriend/almost-fiance Cressida Bonas, Prince Harry jetted off to Guy Pelly‘s wedding in the US and rebounded with some random socialite at the party.

It seems like every time Harry ends up in the US, he draws attention to himself for the wrong reasons. At least this time, he just hooked up with a girl instead of running around naked in front of cameras.

Anyway, both Harry and Prince William were at the Memphis, Tennessee wedding of Guy Pelly and Lizzy Wilson. They served as ushers for the ceremony, and Harry reportedly caught the eye of a blonde socialite. Her name has conveniently been kept out of the press, so what’s the bet that she’s the one that leaked all this?

Anyway, this ‘socialite’ reportedly hails from outside Philadelphia and knew the bride, Lizzy Wilson, from college. According to US Weekly, Harry quickly got the girl’s phone number by twerking, and then proceeded to spend the night with her at his private home. US Weekly’s ‘source’ adds, “She stayed overnight. She’s been bragging about it to friends. To Harry, it was just a hookup.”

Man, the press won’t let up with this twerking thing, will they? Prince Harry twerked. End of story. If anything, I think that his twerking probably drove girls away, not convinced them to give him their phone numbers. Plus, if Harry was hitting on this girl, there no way way that she was NOT giving him her phone number, no matter how idiotic his dancing looked. This girl knew what she was doing, as evidenced by the ‘bragging’ part. They both knew it was a hookup, and she got everything she wanted out of it – except publicity, apparently. Good for her though – I think this is the first time some random girl hooked up with Harry and didn’t try to get her fifteen minutes of fame from it.

Could Harry’s hook-up be the blond talking to brother Prince William?