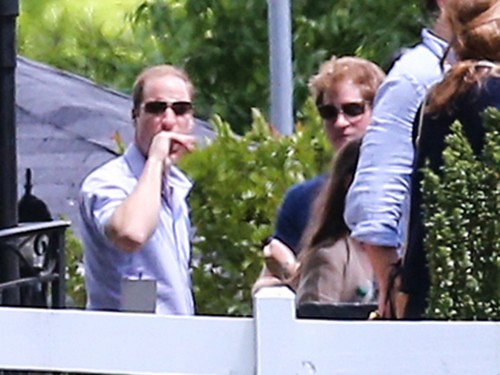 Prince William and Prince Harry spent the weekend in Memphis to attend the wedding of their Eton pal Guy Pelly – Kate Middleton was very upset that she was left at home. The royals’ BFF married American heiress Elizabeth Wilson whose family owns the Holiday Inn chain and they have not been shy about celebrating down South with their friends. And they’re not the only royals at the shindig – their cousins Princess Eugenie and Princess Beatrice are also enjoying the festivities.

One of the best things about the South, if you’ve never had the pleasure of heading down there, is the food. Heavy on the pork and most things fried. The royals sat down with their buddies for a pig roast at a local BBQ place after they visited the home of America’s onface and former King – Elvis Presley.

To amuse their Brit friends, the happy couple had Graceland shut down to the public so the royals and friends could enjoy a private tour of the rock legend’s home. Wills and Harry toured in style wearing gold glasses to emulate the sexy singer. But that was just the tame stuff. It was after the wedding that the real shenanigans got started. The wedding and reception were held at the posh Memphis Hunt and Polo Club.

That’s where the royals all cut loose in a big way. Perhaps inspired by the tour of Elvis’ home, Prince William took the stage and belted out “Shout” as the party goers cheered and danced. Shouting and crow surfing ensued as the Prince stole the mic and the show. He even managed to out-do his party animal brother Harry, not that the ginger cutie was shy himself.

Newly single Prince Harry shook his royal rump extensively and even twerked to the great amusement of their hoity toity friends. And as if the bachelor Prince couldn’t get any hotter, he acquired and mastered a Southern twang while in Memphis that he used to flirt with the ladies. After Wills sang his royal face off, the new Dad hit the dance floor and boogied for 45 minutes.

The brothers also took in a little local history and visited the Lorraine Motel where Martin Luther King Jr was assassinated. Aside from this somber bit of sightseeing, the royal duo spent a lot of their time having fun with friends and avoiding the crowds of screaming girls eager for a glimpse of the princes.

What’s most interesting is that in addition to the crowd surfing and other antics, staff working the event say that William was actually more wild than his single brother who is on the heels of a major break up with gal-pal Cressida Bonas. Seems Harry learned his lesson about cell phones, because no photos have made it out of the reception so we’ll just have to imagine how adorable hunky Harry looked shaking his royal bum… (Sigh)