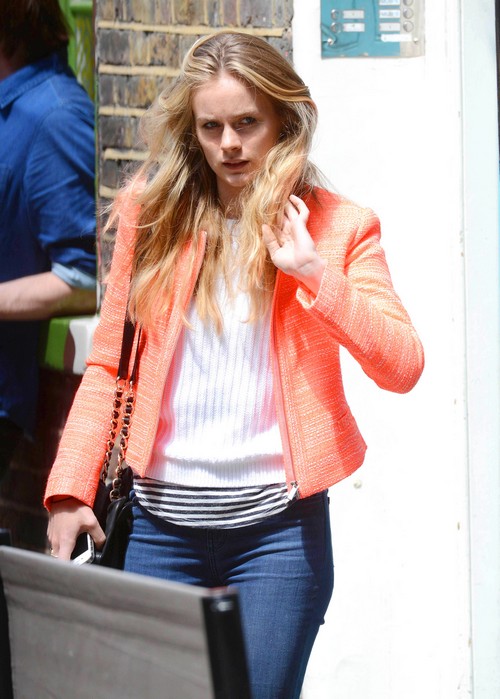 When Prince Harry and Cressida Bonas split up earlier this year there was some speculation that it might be a temporary break in their relationship. She was said to have gotten cold feet about marrying into the royal family but time apart has made Cressida miss Harry. Cressida had been taking steps towards trying to win Harry back and it seemed to be working until recently. Cressida is also pursuing an acting career and recently booked Tulip Fever, a Harvey Weinstein film.

According to the June 30th print edition of The National Enquirer when Queen Elizabeth got wind of the fact that Cressida is now a working actress , she had a chat with Harry. The prince was basically told that he needs a suitable wife and that Cressie is certainly not it. Acting is not a respectable career according to Elizabeth and she is absolutely not going to accept an actress into her esteemed family. Basically Cressida is in exactly the same position that she was in at the time of her split from Harry. She doesn’t want to give up every part of herself just to be Harry’s other half and that is exactly what the royals are requiring her to do.

Do you think that Cressida will reconsider acting in order to hang on to Harry? Would she give up a chance at the career that she most wants in order to be with her prince? How about Harry, will he buck the system and continue dating someone that he now knows for certain that Elizabeth will never approve of or will simply do as he is told? Tell us your thoughts in the comments below!

British socialite and dancer Cressida Bonas heads out for lunch in London, England on June 5, 2014. Thinks are looking up for Cressida since her split from Prince Harry. She’s signed on to star in her first ever movie, “Tulip Market” with Cara Delevingne, Zach Galifianakis and Christoph Waltz. Let’s be serious here – once Cressida decided to choose Hollywood her relationship with Harry was never happening – the Queen’s grandson and future monarch is NOT marrying a working actress.