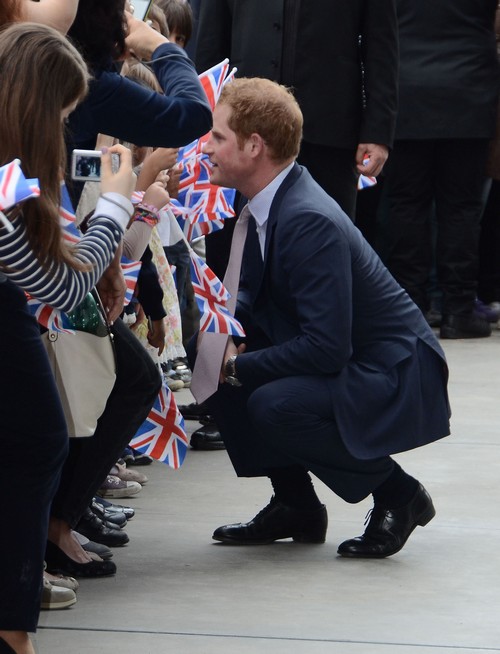 ‘Single at last, single at last, god almighty I am single at last.’ I have a feeling that those words, or some variation of, have been passing through Prince Harry‘s mind for the past two weeks. It’s been less than a month since he’s officially broken up with Cressida Bonas, and in that time, he’s already partied on two different continents, hooked up with at least one random blonde, and gotten drunk more than a few times.

The most recent stop on Harry’s post-Cressida vacation was Rome, which likely means more trysts with Italian women. However, Harry was also spotted visiting the Maxxi Museum in Rome, and he stopped to sign autographs for all the children waiting at the entrance for him. D’awww. It’s good to know that the breakup hasn’t made him bitter or anything….

Oh, who are we kidding? Harry’s ecstatic to be rid of Cressida, and it can’t be more obvious – both with his actions and the way he’s rebounded with an almost ludicrous positivity. Shouldn’t the guy be moping somewhere in England, refusing to go out and lamenting the loss of his one true love? After all, all those royal sources were saying just one month ago that Harry still thought that Cressida was ‘the one’, and he was willing to settle down for her. But if that was the case, there’s no way he’d be so cavalier about their breakup now. It just goes to show how little investment Harry had in their relationship to begin with, or else he’s just used to breaking women’s hearts and moving on quicker than you can say ‘royal consort’. Of course there are countervailing rumors that Prince Harry wants Cressida Bonas back.

Plus, we now have the fun job of speculating who Harry will end up with next. And while that information may not be public for some time, we have the next best thing: a Prince Harry reality show! Well, not really. There’s a show called I Wanna Marry Harry, which has a group of women competing to marry ‘Prince Harry’. Except ‘Prince Harry’ is not actually the real Prince Harry, but rather a pretender hired by the network. I’m not sure if the women competing to be his wife are stupid enough to think that he’s the actual Prince Harry, but we’ll find out when the show premieres on Tuesday. In the meantime, we can amuse ourselves by thinking of all the ways that the real Harry could possibly guest star on this show, and probably cause a riot in the process.