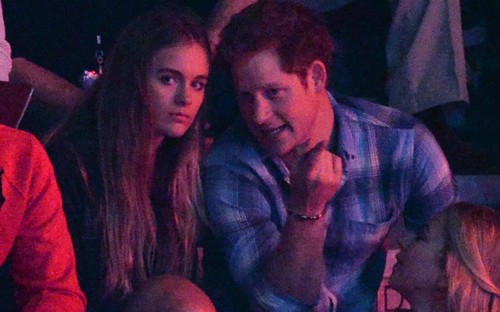 Prince Harry and Cressida Bonas made their first official appearance together at an event for the youth empowerment charity We Day. Cressida and Harry both seemed happy to be photographed by official cameras at the event, the first time that they’ve made a public appearance as a couple. What does this mean? Well, it means that their engagement is all but confirmed, and that the palace is probably only a few months away from announcing the news.

They’re likely testing the waters with a smaller event before they have Cressida appear as Harry’s date at a major event. While the palace still won’t officially confirm Harry’s relationship with Cressida, allowing the two to appear together at such a highly photographed event is tantamount to confirmation. There’s no way the couple would have decided to take this step if they weren’t planning on getting serious, and it’s an acknowledgement that they’ll be doing plenty more posing together in the future.

Harry even gave a speech at the event, saying, “For those of you expecting Harry Styles, I apologise and no, I’m not going to sing. Everyone one of you has done something amazing to be here. Your actions have, and will, shape our futures. We can inspire each other and should ask others to do the same.”

All those rumors that an engagement is imminent turned out to be true, didn’t they? Queen Elizabeth has given her stamp of approval! I can’t believe that the infamous Prince Harry is finally going to get engaged, and to such a seemingly well brought up lady. Well, the Queen would never have said yes to the relationship otherwise, which means a permanent good bye to all of Harry’s ex-girlfriends, including the always entertaining Chelsy Davy.