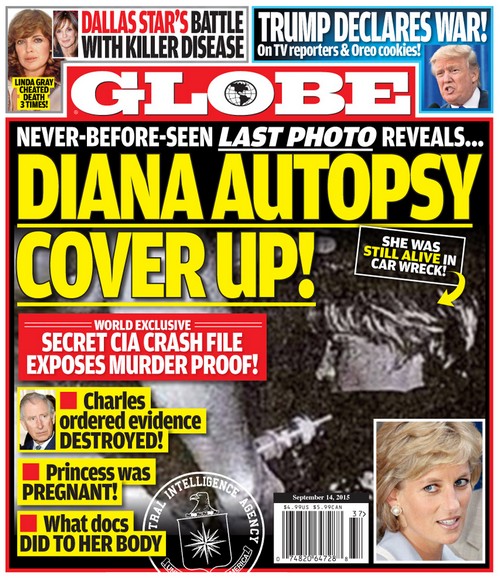 The 18th anniversary of Princess Diana’s tragic death was honored on August 31, 2015 – and once again the question arise… was her death really an accident. Princess Diana and her lover Dodi Fayed lost their lives in a tragic car accident, which was thought to have been caused by the paparazzi that were chasing them in a high-speed pursuit. Since Princess Diana’s death speculation has run wild that she was actually murdered and pregnant – and conspiracy theorists have had a field day with the case.

This week’s cover of GLOBE Magazine teases that shocking new evidence in Princess Diana’s death has been uncovered – and it looks like there could be some truth to the theories that she was murdered after all. GLOBE’s headline screams, “Never Before Seen Last Photo Reveals Diana Autopsy Cover-Up!” The cover also features a grainy photo of what appears to be Princess Diana in the wrecked car after the accident – looking very much alive. GLOBE goes on to tease, “Secret CIA Crash File Exposes Murder Proof.”

A popular theory among Princess Diana’s devoted followers was that her husband Prince Charles and the royal family ordered to have her murdered and covered up her death. Supposedly, Princess Diana was pregnant with her lover Dodi’s baby – and the royals didn’t want her to bring shame on their family by giving birth to someone outside of their bloodline. This week’s cover of GLOBE supports that theory and teases that “Prince Charles Had Evidence Destroyed” and Princess Di was indeed pregnant.

In other celebrity gossip news, GLOBE’s cover also teases an in-depth story on the deadly disease that Dallas star Linda Gray has been battling – apparently the actress has cheated death three times! And, our friends at GLOBE always follow the most controversial stories, so naturally they have the latest news on Donald Trump, Presidential hopeful. The cover teases, “Donald Trump Declares War On TV Reporters and Oreo Cookies.”

Do you believe the conspiracy theories surrounding Princess Diana’s death? Was she actually murdered? Is Prince Charles involved in the cover-up? Let us know what you think in the comments below and don’t forget to pick up a copy of GLOBE Magazine as soon as it hits newsstands!