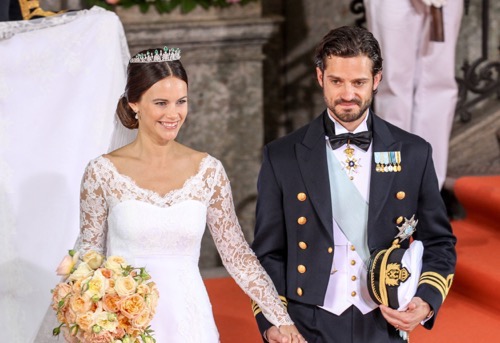 Princess Sofia of Sweden is pregnant and expecting her first baby – but Kate Middleton is jealous that yet another member of the Swedish Royal Family is stealing her spotlight. Princess Madeleine wowed royal watchers when she chose to screen Prince Nicolas’s christening on Swedish television. And her two-year-old daughter is just as charming as Prince George – she stole the show when she played and danced in the aisle during her baby brother’s baptism.

Adding to the Duchess of Cambridge’s frustration – Princess Sofia and Prince Carl Philip are expecting their little bundle of joy’s arrival in April 2016. Wills and Kate will celebrate their fifth anniversary on April 29 – hopefully Baby Sweden won’t make its royal debut and take the focus off the Duke and Duchess’s important wedding anniversary!

Prince Carl Philip and Princess Sofia made the announcement on October 15 – “We are so happy and excited to announce that we are expecting our first child. We are very much looking forward to it.” The couple waited several days after Prince Nicolas’s christening so as not to take away from his important day.

The Duchess of Cambridge has already felt pressure from Buckingham Palace to have another baby. Will Queen Elizabeth expect Kate Middleton to add a third baby to the Cambridge family? Babies equal excitement, attention, and money – and the British coffers can always use an infusion of cash.

Also styled Duchess of Värmland, the former Sofia Kristina Hellqvist was a model and “Paradise Hotel” reality television show contestant before she married Prince Carl Philip, Duke of Värmland on June 13, 2015. Not only is Duchess Kate afraid Princess Sofia’s pregnancy will draw attention away from her and the British Royal family, she’s also green with envy that Sofia was a glamour model who was named “Miss Slitz” by the men’s magazine Slitz in 2004.

The Swedish Royal family seems to be gaining in popularity – and this could divert a lot of attention – and money – from the Duke and Duchess of Cambridge. Kate Middleton may have to step up her game even more if she ever hopes to receive the level of adoration her late mother-in-law Princess Diana received.

Are you a fan of Royal News?  If you are CDL has you covered!  Head over here for all your Royal News!