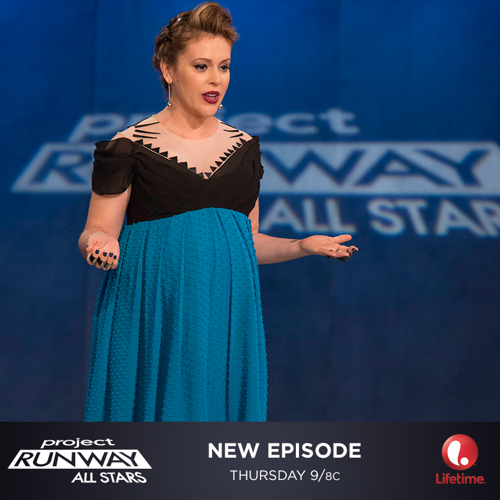 Tonight on Lifetime Emmy Award winning Tim Gunn’s Project Runway All Stars continues with an all new Thursday January 15, season 4 episode 9 called “Sketching with Sharks” and we have your weekly recap below. On tonight’s episode, the designers must use marine life as inspiration for avant-garde fashion.

On the last episode, the designers created elegant resort wear with swimsuits. Before that, they plunged into a major challenge when they had collected their fabric from under the water. Fashion figure Nigel Barker was the guest judge. Did you watch the last episode? If you missed it, we have a full and detailed recap right here for you.

On tonight’s episode as per the Lifetime synopsis, “Avant-garde fashions are created as inspired by underwater life.”

The avant garde challenge involves picking sea creature from the Long Island Aquarium as the inspiration for their designs. The contestants have two days to complete their outfit with a budget of $150. However, someone can get extra $100 if they volunteer to sketch in the shark tank. Helen volunteers to do it.

Dmitry chooses a seahorse, which inspires him to create a long coat. Jay picks a red bubble-tip sea anemone because it reproduces asexually, and he enjoys playing with those kinds of themes.

Michelle chooses a cuttlefish because she wants to imitate its shape in her outfit.  Helen sketches a cloak because she wants something soft to complement the sleek and sexy feelings evoked by the vicious shark.

Sonja chooses a piranha because they are really beautiful despite being seen as vicious. Jay chooses the lion fish because it is very ethereal while having a sense of weight to it, choosing to use vinyl for his outfit, which he has never used before.

Michelle gives Justin some extra fabric because he’s freaking out. She says if anyone would win an avant garde challenge, it would be him, so she doesn’t know why he’s flipping out, and that she hopes someone would do the same for her.

When the judge comes in to evaluate their progress, Jay is told he shouldn’t get so much into the asexual thing that he forgets the fish. Zanna tells Sonjia that her skirt is trendy, but not avant garde. Michelle is told her gown looks like a maternity gown. The judge tells Helen her dress reminds her of a shower loofah, and it should have definition and be attractive, not just weird. Zanna has told Dmitry he has been consistent on every challenge but never won, and he says sometimes he’s felt he should have won, but it’s their opinion. Zanna thinks he’s being arrogant. When he says he loves it and that’s all he needs, she says that no, he needs to win.

Lauren B. Beauty is giving the reward for winning the challenge, a year’s supply of their products valued at $5,000. The contestants are working with Lauren B. Beauty to perfect their models’ looks.

For his outfit, Fabio is doing a backward tux, which Jay says is a cool idea but the craftsmanship isn’t there. Michelle ‘absolutely hates’ her look because it looks like maternity clothing. Sonjia says she doesn’t know how avant garde Helen’s ruffled dress is. Helen is also worried about this as she is not normally an avant garde designer.

Helen is hoping her concept translates to the judges. Fabio thinks his piece is the most conceptual piece out there on the runway. Dmitry feels like his vision came to life completely.

Alyssa says the designers really raised the bar this week. Sonjia is immediately declared safe. Isaac says this is definitely the best runway they’ve seen all season. He says he doesn’t get ‘shark’ from the dress, but who cares.

Justin is told by Georgina that his dress isn’t very avant garde. Isaac tells him something about the silhouette is just off. He is told the ideas are great, but the execution isn’t quite there.

The judge’s disagree on Melissa’s dress, with Nicole saying it loses the female form but the other judges like it.

Dmitry is praised for his outfit. Alyssa tells him she feels he went out of his comfort zone and he should keep going.

Fabio is told his fabric choice has really hurt him with his backward suit. However, Nicole likes the strong shape and structure of the suit.

Michelle’s look is criticized for being contrived.

Dmitry is the winner of the challenge, and Justin is sent home.