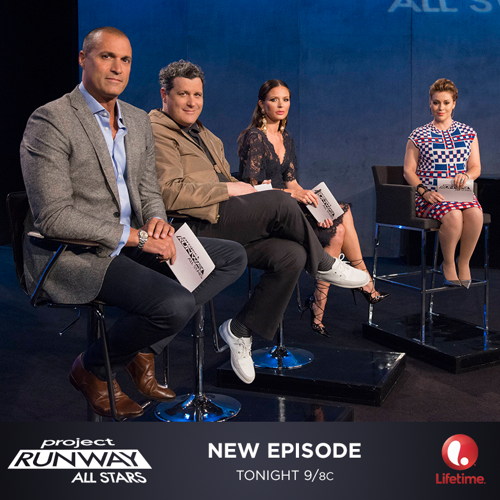 Tonight on Lifetime Emmy Award winning Tim Gunn’s Project Runway All Stars continues with an all new Thursday January 8, season 4 episode 8 called “Making a Splash” and we have your weekly recap below. On tonight’s episode, the designers must create elegant resort wear with swimsuits.

On the last episode, the designers had to create looks for Match.com singles to wear on first dates. Did you watch the last episode? If you missed it, we have a full and detailed recap right here for you.

On tonight’s episode as per the Lifetime synopsis, “the designers create elegant resort wear with swimsuits. Before that, they plunge into a major challenge when they must collect their fabric from under the water. Fashion figure Nigel Barker is the guest judge.”

The designers are asked to make a splash in more ways than one on tonight’s all new episode of “Project Runway All Stars”. Alyssa Milano had the honor of telling the remaining contestants they were going to be creating resort wear. And not just any kind of resort wear. They had to create an outfit suitable for elegant getaway.

The winner of the challenge has been promised exposure in USA Today as well as fully paid getaway for themselves and loved one. But there is a catch. Before anyone can start packing suitcase for their dream vacation, the designers also have to create a swim suit to go under the outfit. And, truthfully, not everyone has had experience in making a swimsuit. Michelle admittedly dabbled in it but even she doesn’t have that much in her capabilities.

So this challenge could either make or break many of the designers. And the one leg they had to stand on was ultimately tripped up by the judges because the designers are going to be given all new models this week as well as what seems to be impossible task.

Plus, the designers didn’t even get a chance to pick their own fabrics. It seems that someone had the bright idea that the designers should collect their fabric from under the water. Thankfully, none of them had to swim but the people assigned to them apparently could not see all that well under water. So the guys and girls were mostly stuck with working with crap.

Later, their mentor for this week, Fashion Editor Alison Maxwell, stopped by the workroom. And for the majority, she seemed to like what she was seeing. Though there was the occasional warning. Sonja, for one, was warned about her usage of denim. The getaway trip they have in mind is for places like Ibiza and Maldives not Florida. So she has to keep it chic!

And number one important rule they should all remember is that they must only focus on what they’re making – and do not look around. Dmitry did that and it made him doubt himself. Yet Alison and Zanna loved what he was doing and even said so when they came by.

They were so enthusiastic about what he was making or at least the vision he was painting – Michelle ended up voicing some doubts in her confessional. Because in her mind she thought what Dmitry was doing looked hideous.

But despite the occasional hating, the designers had to deal with their model situation. Everyone had started to create looks with their original models’ body shape. And then when they were given their actual models – some of them had to create all new looks on the fly just to fit the model.

Hence, last minute alterations set everyone back! Though, things did start to finally calm down towards the end. Makeup was done and shoes were picked out but whether any of it was enough was left up to the judges.

This week guest judge was Nigel Barker and so the designers were hoping he would go easy on them. But when has that ever been what this show is about!

Helen almost went home last week yet she’s definitely done an about turn. Right off the bat, Helen and Fabio were told they were safe. So it appears she has redeemed herself and reinstall some confidence on her ability back into the judges.

As for everyone else, Dmitry was up first. His matching asymmetric dress and swimsuit was what saved him. Everyone loved it and Nigel had even used the word editorial to describe the swimsuit.

However, not all of the designers were as lucky as Dmitry. The judges either loved the outfit and hated the swimsuit or it was reversed. Jay’s dress was top heavy but it flowed beautifully. His swimsuit on the other hand was simply ridiculous.

And Michelle’s dress was a train wreck. She honestly made her model look heavier than she was. Yet the judges loved her swimsuit. Just not as much as they loved Sonjia’s

Sonjia used a head bandana as a swimsuit top and the judges the inventiveness of that. But they hated her lace and denim outfit which they all called pajamas.

Samantha’s outfit while a jumpsuit was kind of a filler. It didn’t really make impact until the swimsuit underneath was revealed and no one could stomach looking at it.

Justin, though, ended up surprising everyone. They loved his whole look and swimsuit. So everyone knew it was going to come down between him and Dmitry and weren’t that shocked when it did.

Justin ended up winning tonight’s challenge but like everyone else he had to make a tearful goodbye to Samantha. She was sent home though she swore we’ve that was the last we’ll be hearing of her.