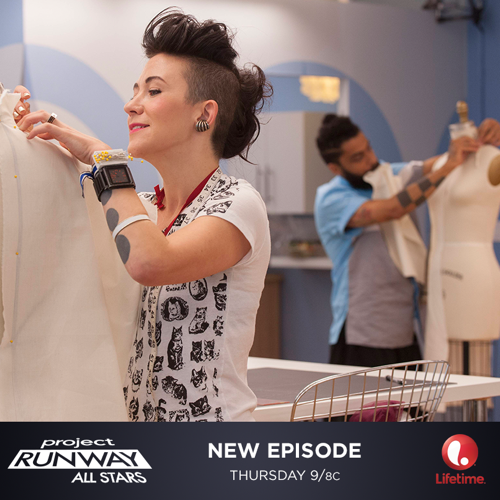 Tonight on Lifetime Emmy Award winning Tim Gunn’s Project Runway All Stars continues with an all new Thursday January 29, season 4 episode 11 called “Versatile Tops and Bottoms” and we have your weekly recap below. On tonight’s episode, the designers have to create bridesmaids dresses.

On the last episode, Alyssa and the judges took over Times Square to educate the designers in the business of fashion. Did you watch the last episode? If you missed it, we have a full and detailed recap right here for you.

On tonight’s episode as per the Lifetime synopsis, “the designers must use Marchesa’s showroom as inspiration to create bridesmaids’ dresses.”

The challenge this week is a collaboration with Marchesa. There is a bride-to-be who needs bridesmaids dresses, and the contestants’ challenge is to create a contemporary dress for their bridesmaid that can also be worn in the future.

The winner gets a Marchesa diamond ring. The contestants find out the wedding is tomorrow, and they are all invited to the wedding ceremony, which will be conducted live on the runway by Alyssa Milano.

Sonjia hasn’t sketched and doesn’t know what her dress is, but is confident that it will come to her. At dinner, she has a meltdown and starts crying. The others suggest she takes a breather and go back to it.  In confessional, she says there’s so much pressure to come up with a great design every week.

Fabio is using organza, which is hard to use to structure a dress. In confessional, Dmitry says he has set himself up for a disaster.

Michelle is told that Marchesa has a romantic, flowy feel and they want to make sure her dress matches that. Helen is also told something similar about her dress which looks somewhat business-like.

With only two hours left, all of the designers have a lot of work to do.  The bridesmaids come in for a fitting.

Helen says it’s ballsy of him to recreate the same dress the woman was wearing at Marchesa. The dress is pretty much identical.

Michelle’s dress doesn’t fit her model at all, and she doesn’t have time for alterations.

Helen has covered most of her dress with lace; however; the back, which she describes as “boring,” is plain, and the dress has weird pleating on the bottom.

Michelle’s pink dress still doesn’t fit her bridesmaid correctly. She says she spent so much time working on the “romance” that she didn’t have time to alter it.

Sonjia’s dress is the same shade of pink, with a lot of drapery, a belt and some skin showing on the front leg area.

Fabio’s dress is praised for being a departure from his regular designs and having a modern feel. However, his hemline is called “kinda a mess.” He is also criticized for his choice of fabric. Mizrahi says this isn’t the worst dress he’s seen in his life, but this is supposed to be Project Runway All Stars and this is a good challenge and the dress doesn’t live up to it.

Michelle is told to make her dress shorter. The center applique is called “phallic.” The hem is called “a little circus costume.” However, she is appreciated for pushing the envelope a little bit.

Dmitry’s dress is called “unattractive” by Mizrahi, who says this isn’t the best runway or his best week of all stars. Georgina says the dress is boring and safe, and like something she’s seen a million times. Mizrahi says it is not a good dress period.

Georgina called Sonji’s dress one of the more exciting on the runway. Mizrahi says he’s sort of baffled and doesn’t know who any of the contestants is this week. He says the dress has too much drapery, which most women could not handle. Milano, however, says she loves the dress and loves that the drapery could be changed to flatter any woman. She reveals that she gave Sonjia’s dress the highest score of the day.

When the judges deliberate, the judges say they liked Helen’s dress. However, they say it is conservative and safe.  Milano continues to defend Sonjia’s dress, when the other judges say it is unflattering.

Georgina called Dmitry’s dress “offensively dull.” However, the guest judge says she gave it one of the highest scores because it wouldn’t be her choice, but she would wear it over some of the others.

Georgina says an all-star designer should know better than to use the organza that Fabio used this week. Mizrahi says he would send Michelle home over Fabio this week, because Fabio’s dress is chic. Georgina argues that Michelle’s dress is more interesting.

Helen wins the challenge for some reason, and Fabio is eliminated.