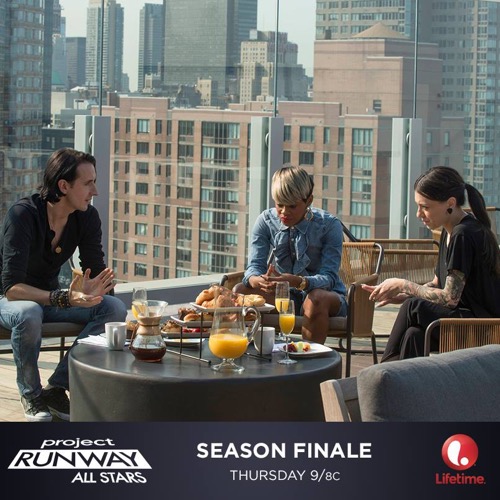 Tonight on Lifetime Emmy Award winning Tim Gunn’s Project Runway All Stars continues with an all new Thursday February 12, season 4 episode 13 called “4 Seasons in One Finale” and we have your weekly recap below. On tonight’s episode, the finalists design collections representing the four seasons of the year.

On the last episode, Marilyn Monroe’s timeless beauty inspired the designs of red carpet gowns. Did you watch the last episode? If you missed it, we have a full and detailed recap right here for you.

On tonight’s episode as per the Lifetime synopsis, “the finalists design collections representing the four seasons of the year; the winner is chosen.”

Alyssa Milano has definitely given these all-stars their hardest challenge yet. Though with only three designers left it’s really is the time to go big or go home on tonight’s season finale of “Project Runway All Stars”.

So, on tonight’s episode, the designers were asked to create an eight piece collection. And not just any old collections either. They were given specific instructions that while using their eight pieces; these designers have to encapture all four seasons of a woman’s wardrobe in one collection.

And, well, some of these designers aren’t exactly known for their versatility!

They were given 3,000 dollars to go shopping and in a typical fashion Dmitry described his line as a timeless, playing with the symmetry, one of kind piece. And just like usual Sonjia went for the bold and bright. She wanted her woman to be the center of attention and actually have a “wow” moment. So Dmitry and Sonjia are both relying on what has worked for them in the past yet for some reason they’ve recently started to make jabs at each other for doing what they call “the same old thing”.

Meanwhile, and funnily enough, Helen is doing what she did before by making a Wednesday Adams/ Channel line has mostly kept her head out of the fire. So the competition had truly taken turn away from the fierce and into the vicious. But surprisingly Zanna didn’t help the situation with her check-in.

And out of those two, no one acknowledge Helen as the threat she is. It seems that in spite of making into the top three – Helen isn’t given her due!

Besides all of them being great designers in their own right, the top three were also given additional help this week as they put the finishing touches on their collection. Returnees Fabio, Jay, and Kate all came back to help their friends. And to dole out some advice when necessary.

So, for a few days at least, the atmosphere in the workroom did lighten up. The designers weren’t snapping at each other and everyone (other than Dmitry of course) were calm and even relaxing.

They’ve all worked off a vision of theirs and they either had to see it to the end or just go home by that point!

Hence Sonjia chose to stay with the Urban Egyptian theme when it came time to pick makeup and hair. And Helen stayed with the Channel outlook. But when it came time for Dmitry to pick hair and makeup – why did he choose the wet hair and metallic look to go with a “Timeless and Classic” collection?

Helen had described his look as matronly and Sonjia had said it pretty much lacked color. So where was the cohesiveness? And were the judges going to buy it?

The guest judges tonight were Oscar award winner Mia Sorvino and famous designer Zac Posen. And while Dmitry added an overall “modern touch” to his collections – the judges (including the ones that already knw Dmitry’s style) were caught frowning several times throughout his show. Almost as if they didn’t get the full impact he was expecting.

In the meantime, though, the crowd ate up practically everything. Michael Costello who himself was an all-stars winner enjoyed the whole show also several notable celebs such as the author of “Eat, Pray, and Love” were left excited about what they had seen.

Helen’s line was simply and soft, Sonjia’s was wild and bold, and Dmitry’s was fiercely modern even as it used time honored pieces. And with that being the competition – who stood out the most for the judges?

Sonjia was the first to be critiqued. And she received some bad news but mostly the judges loved her Urban Egyptian. They loved her colors and pretty much everyone agreed on loving her winter yellow coat. That coat was her winning piece of the collection. However, Zac Posen used the words “market ready” for the red lace dress she had repeated.

As for Dmitry, the one thing the judges agreed on is that they love his architecture. He had these great ideas but there’s this once piece on it they believe he should have fixed. But for him too, they mostly had good things to say. Even as they did end up disagreeing with each other.

And then there was Helen’s line. They love how she was able to create a line that is so her but that didn’t stop them from having critiques. Apparently, she lost her cohesiveness (that she thought she was the best at back in the workroom) along the way in her designs and her line was so her – they told her they were hoping for something extra this time.

So, when it came time for the judges to begin elimination, their first discussion was about eliminating Helen. They like Helen both as a person and as a designer. But there wasn’t a “wow”. And that meant letting her go was the easiest.

Officially, Helen was the second runner up. And later when it came down to Dmitry and Sonjia – the judges were at first unsure about who should win this season All Star title. Yet, ultimately, they chose to name Dmitry their winner.

Despite the ups and down of his collection, no one can sew or has a vision like Dmitry! Although Sonjia did come close (so let’s not forget that part)!