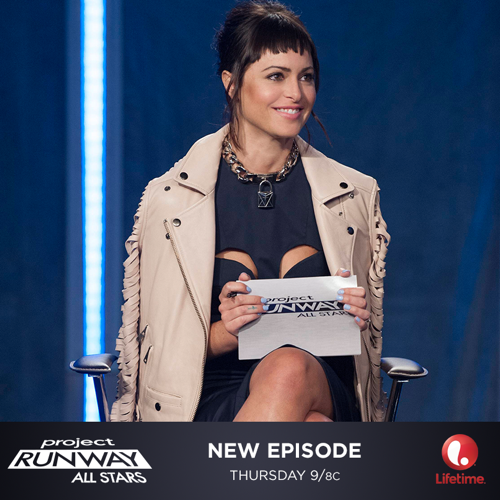 Tonight on Lifetime Emmy Award winning Tim Gunn’s Project Runway All Stars continues with an all new Thursday February 5, season 4 episode 12 called “Some Like It Hot Dog” and we have your weekly recap below. On tonight’s episode, Red-carpet gowns are fashioned as inspired by the beauty of Marilyn Monroe.

On the last episode, the designers had to use Marchesa’s showroom as inspiration to create bridesmaids’ dresses. Did you watch the last episode? If you missed it, we have a full and detailed recap right here for you.

On tonight’s episode as per the Lifetime synopsis, “Marilyn Monroe’s timeless beauty inspires the designs of red carpet gowns.”

The lead actress of the upcoming lifetime movie about Marilyn Monroe tells the contestants that their assignment is to create a dress inspired by the actress. Alyssa Milano elaborates, saying that they must create a red carpet gown suitable for the Oscars that will be remembered for years to come just like Marilyn Monroe.

The contestants get a budget of $500 each, the highest in the season so far, but they have just one day to complete it. The winner gets the opportunity to be a costume designer for an upcoming Lifetime project.

Helen says she wants to create a dress with a high collar and a cap sleeve. She knows that the judges will probably expect a lot from her as gowns are her specialty. She gets some white chantilly beaded lace and a mint julep fabric to pair together.

Michelle gets a black burnout velvet fabric with tinsel. It is extremely expensive and only about 40” wide, but she decides it’s worth it.

Dmitry is dying rows of fringe to attach to his dress.

Isaac Mizrahi comes in with a surprise. He says he has another icon to introduce to them: Out comes Lassie, officially turning this show into a complete irredeemable joke.

He tells them their mini challenge is to design a piece of canine couture, with each contestant getting a different rescue dog to work with.

Each designer gets a special “doggie bag” with fabric, toys, treats and a movie genre which each contestant will use as inspiration for his/her design:
Helen: sci-fi.
Michelle: western.
Sonjia: musical comedy.
Dmitry: gangster.

The winner will be the guest designer for Lassie’s couture collection. Each designer will watch the red carpet with his/her dog. “Unfortunately, I am allergic to dogs,” Dmitry says. “But I am more allergic to losing.”  Lassie “helps” pick the “winner,” with two barks for yes and one bark for no. Michelle “wins” this “challenge.”

She criticizes the chains on the back of Michelle’s dress for looking “cheap” and being “kind of commonplace,” telling her to make it look more expensive like the rest of her dress.

Zanna praises Sonjia’s dress for being modern and also something that can stand the test of time. She tells her to focus on the structure of the dress. When asked what her best competition is, she says Dmitry because he’s never been at the bottom.

Zanna hilariously says that the dress needs to be “one of the most iconic dresses of all time” just to win this challenge.

She tells Helen that her dress looks too Victorian and old like it belongs in a museum.

Dmitry says in confessional that Helen’s dress is “blah” and he “wouldn’t look twice at it.”

Zanna keeps saying these dresses that have been made in one day need to be “timeless” and “iconic,” adding that all of these dresses are somewhat “forgettable” so far.

Helen decides to scrap her entire bodice to make it sweet and sexy like a camisole top to make it more modern looking.

Sonjia’s zipper breaks, which will take another ten to fifteen minutes to fix tomorrow morning when she is already struggling with time.

With two hours remaining the next morning, she has a lot to do but remains focused.

Dmitry needs to sew all the crystals onto his dress by hand.

Helen uses diamond stud earrings and a diamond ring to add to her look. She says she is confident because she looks around at the other contestants’ dresses and she sees “black, dirty mop and cheap gold, and I’m like, there’s no way.”

The guest judge is Sophia Amoruso of NastyGal.com, author of the book #GIRLBOSS.

Michelle has reduced the chains on the back of her dress to one chain, creating a classier and more formal look.

Mizrahi says that this was one of the best runways ever, and that they did their job picking the final four.
He says he likes that Sonjia’s dress is midriff, and that out of all the dresses he likes how “dramatic” and “memorable” hers is. He also calls it inventive. Chapman, however, says there is too much going on that detracts from the statement bow. Amouruso likes how it could be photographed from many angles.

Milano says the textile is the star of Michelle’s dress, but she doesn’t love the chain and she thinks maybe the dress needs shoulderpads to give the ridiculously skinny model a tinier waist. Amouruso says the dress may be a little too sheer, but Mizrahi says he likes the sheer because he can’t see where it is sheer and where it is lined. He says he is on the fence about whether the textile looks expensive. Chapman calls the dress “impactful,” but says she needs to be careful with the pattern because it doesn’t seem expensive.

Amouruso says Helen’s beading is gorgeous, but she doesn’t think the dress is extremely memorable and that she doesn’t know if the color would look good on various skin tones. She says maybe there should be more drama somewhere. Milano says it’s a solid dress that there isn’t much to say about, but Chapman says it’s perhaps too safe and that she would like to see more originality and more of Helen in the dress. She criticizes the straps. Mizrahi says he loves the dress and the color, however it doesn’t move beautifully. He and Chapman suggest the dress should be shorter.

Milano is blown away by Dmitry’s dress, saying it may be her favorite thing she has ever seen on the all star runway. Amouruso loves all of the elements he has combined, and the clear straps. Chapman says this is one of the few times where the dress could be on the red carpet as is because it looks like it’s worth thousands of dollars. Mizrahi calls it “major,” but he says he may not wear this to the Oscars because some elements make it somewhat ruffian and less dressy.

Amouruso praises Sonjia for creating a top that adds volume without overwhelming.

Dmitry’s dress is praised by all of the judges. Mizrahi says it’s one of the prettiest dresses they have seen.
Helen’s dress is called pretty and safe, but Mizrahi says there’s an elegance to it and Milano agrees, saying actresses want a dress they can wear that won’t wear them. Mizrahi says he wishes the dress had shown an all star quality, however.

Michelle’s dress is also called safe by Chapman, and Mizrahi says the fabric is the biggest issue. The chain in the back of the dress is called “skanky,” and Amouruso say she doesn’t think it’s Oscar worthy.

Dmitry wins the challenge and a guaranteed place in the finale. Sonjia is then declared safe.  Milano then tells Michelle and Helen they haven’t made their decision yet, and asks them each to explain why they think they deserve to be there.

Michelle says she deserves to win because her style is unique and not seen every day. Helen says there are so many looks she has put on this runway she didn’t think she was capable of and that as a young designer, she finally knows who she is capable of and who she is. Milano sends them both back out so the judges can deliberate.

The judges still can’t decide, and call the two women back out to the runway. When they get out there, all of their garments from the previously eliminated designers are on the runway. The women are told they have one more challenge, which will take place live on the runway tonight. They are asked to change the looks that sent their fellow designers home. They must choose at least three looks and reinvent them into a successful look. They have one hour.

After brutally tearing apart others’ work with her constant insults throughout the season, Helen suddenly gets in a moral uproar about the fact that she has been asked to tear up clothing people have worked really hard on and starts crying like a baby. She magically decides to get over it because she doesn’t want to go home.

Michelle only uses two looks rather than three.

The judges write down the name of who they think should win: Helen wins the challenge.