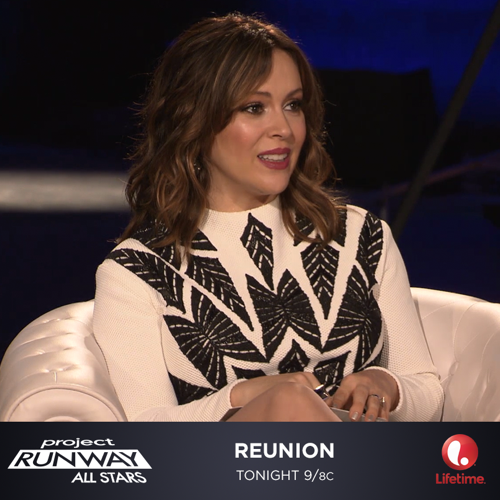 Tonight on Lifetime Emmy Award winning Tim Gunn’s Project Runway All Stars continues with an all new Thursday February 19, season 4 episode 14 called “Season 4 Reunion” and we have your weekly recap below. On tonight’s episode, the clothiers reunite to address the dramas and fashions of Season 4.

On the last episode, the finalists designed collections representing the four seasons of the year; the winner is chosen. Did you watch the last episode? If you missed it, we have a full and detailed recap right here for you.

On tonight’s episode as per the Lifetime synopsis, “the clothiers reunite to address the dramas and fashions of Season 4. Included: behind-the-scenes moments; workroom tensions; the contestants’ Twitter tantrums; viewer questions; and updates on the designers’ lives and careers.”

Alyssa Milano and the rest of Season Four All Stars are all back on tonight’s reunion show. But, instead of talking about their fashion, Alyssa wanted to delve into the drama that happened behind the scenes because apparently a lot happened the audience wasn’t aware of.

Until now, that is!

In the sense of any competition, there were plenty of catty comments and the workroom occasionally resembled a battlefield with the way these designers came at each other. However nothing could compare to what was said over twitter. Asides were one thing but Benjamin took a grudge to a whole new level by accessing social media.

The tweets Alyssa was reading out loud could be defined in two simplest words. Bitchy and Anti-Dmitry! Benjamin looked like he was gunning for Dmitry with all of his comments and no matter what he tries to use as his defense – he didn’t go after anyone else like he did with Dmitry.

And as for Dmitry, hearing what Benjamin said about him didn’t faze him in the slightest. In fact according to Dmitry, he’s actually honored to have been thought of so much. It’s not like he’s even wasted a moment to return the sentiment.

So in that round, Dmitry came out the winner.

But there were other things that spilled out onto twitter and one of them was the Brocade argument. It seems that issue alone became a heated topic that everyone had an opinion about. Yet it all started with fabric.

Back when Sonjia was assigned to create a dress using Brocade fabric – she ended up going with something else. It was an easy mistake and at the time everyone knew she that what she was doing was the wrong thing but didn’t want to hurt her feelings. So Fabio was sent in to talk to her.

Fabio, after all, was a good friend of hers and they knew he would be the best person to talk to her. Though, at the time, Sonjia didn’t want to be contradicted. At least back then anyways. So she ignored her friend and went with making the dress the way she felt like it.

Hence, Alyssa put the issue to a vote. And surprisingly even Sonjia is even willing to admit now the dress wasn’t brocade.

So looking back at this season, the designers are able to laugh at some of the things they got up to. Because it wasn’t all backstabbing and arguments. There were also friendships.

A lot of the viewers were a tad thrown when say a designer would cry after someone else went home. Yet these people were together for months on end and so that made them become friends when under normal circumstances that might not have been possible. So, yes they wanted to win, but they didn’t always want to hurt someone to accomplish that.

Take for instance, when Benjamin and Sonjia were eyeing the same fabric. Sonjia had gotten to it first and because of that Benjamin wasn’t going to choose the same fabric that another designer was choosing to use. Afterwards, he went with a different fabric and later that same episode he was sent home for making an item he himself didn’t truly believed in. So he in that situation he was a gentleman.

Sonjia didn’t appreciate what he did for her but he was a gentleman.

Though in another occurrence with Dmitry and Chris, Dmirty didn’t even want to acknowledge how he might have “unintentionally” stolen someone else’s ideas. And everyone thinks if not intentionally he was influenced by Chris. It was Chris’s idea for a dress and somehow ended up getting copied and while he’s not overtly angry about it – Dmitry was getting a lot of side-eye, both then and now, from the rest of the designers.

So it was a good thing Chris hadn’t gone home that day.

Still, there was one more thing Alyssa wanted to discuss before the reunion wrapped up. She wanted to know what the designers learned from the competition. And for the most part, they said they learned to trust their gut instinct. As long as they feel like their designs are worth it – fight for it!