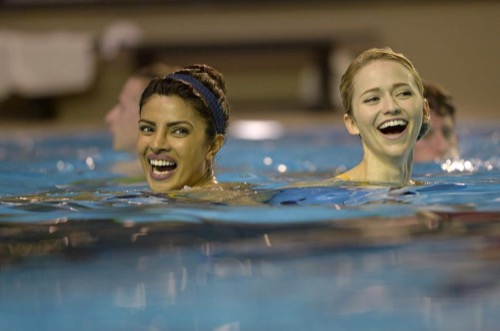 Tonight on ABC Quantico airs with an all new Sunday October 11, season 1 episode 3, called, “Cover” and we have your weekly recap below. On tonight’s episode at Quantico, Alex (Priyanka Chopra) learns of her father’s FBI past; and, in the future, Liam (Josh Hopkins) asks Alex’s mother to take part in a televised press conference geared to getting Alex to turn herself in.

On the last episode, Alex needed to outwit Liam and his team in order to get into her apartment to find evidence to clear her name. Meanwhile, in a flashback, the NATs were tasked with finding potential threats to national security. Did you watch the last episode? If you missed it we have a full and detailed recap, right here for you.

On tonight’s episode as per the ABC synopsis, “at Quantico, Alex learns of her father’s FBI past; and, in the future, Liam asks Alex’s mother to take part in a televised press conference geared to getting Alex to turn herself in. In other events, at Quantico, the NATS learn the art of profiling and focus on their classmates’ strengths and weaknesses.”

Tonight’s season 1 episode 3 looks like it is going to be awesome so make sure that you tune in to our live coverage of Quantico at 10:00 PM EST!

Tonight’s episode of Quantico kicks off with the Quantico class in the pool during training. They are doing the “Sink or Swim” drill – they were tossed in to the pool with their hands tied behind their backs and tied to their partners’ hands. Of course, Alex and Shelby were the first team to get untied. They head to the lockerroom, while they are getting changed Nimah rants to them about how sick and tired she is of Vasquez’s competitiveness. Afterwards, Liam takes Alex aside and gives her the file about her dead father that she had secretly asked for. In class alter that day, the Quantico class is given a lecture on psychological profiles. They are ordered to make profiles of their classmates – Miranda tells her class to find each other’s strengths and weaknesses.

Fast forward to present time – Liam is getting grilled by his higher ups, they want to know where Alex is. They need something to tell the press, the world is demanding answers and wants to know why the second 9/11 was pulled off by one of their own. Liam thinks he may have found someone who can help – he had Alex’s mother brought in to custody. Meanwhile, Alex is on the run, she pays one of her former classmates a visit – Simon – and convinces him to help her find the real terrorist. Apparently, Ryan Booth called him and told him to help her.

Simon reminds her that she got kicked out of Quantico, and he is not in the FBI – so he can’t do much for her. Alex gives Simon a wire that she found from one of the bombs that were planted in his apartment, he agrees to look in to it and see what he can find out about it.
Flashback to Quantico, the students are all partnered up and interviewing each other for their profiles. Ryan is sitting across the room, and keeping a close eye on Alex the entire time.
Meanwhile, Shelby is quizzing Nimah – or possibly her twin – and isn’t making much progress. Afterwards Miranda posts everyone’s analysis on the wall outside of class. They start turning on each other when they read what they wrote about each other. Miranda announces that every student needs to submit a list of the 3 students that they think should be cut from the class – they have 2 hours to make their lists.

Present time, Liam is questioning Alex’s mom Sita. She insists that she doesn’t even know her daughter any more and she hasn’t spoken to her since she graduated from Quantico. Apparently,
Alex’s mom and Liam have some bad blood between them, and she remembers what he and her husband Michael were up to. Meanwhile, Alex and Simon have a bit of a breakthrough. They rush to his lab at work and he looks at her fingerprints on the wire she brought him. Whoever is framing her, used her old set of fingerprints – before she cut her finger in the “Sink or Swim” exercise at Quantico. Her current fingerprints have a scar across her pointer finger.

Simon searches the wire that Alex brought him – it was actually made out of government supplies. And, it was nothing more than a prop. It couldn’t actually have been used to make the bomb that blew up in central station, it was actually part of an old nuclear bomb that would sit in the government’s stock rooms for decades. The wires are the smoking guns that can prove that Alex was framed.

Flashback to Quantico – the students are all cracking. Ryan and Simon are in their room – coming nearly to blows. Simon snaps and starts choking Ryan, he hints that he knows that Ryan is not a former marine. Alex breaks them up and says that this is what Miranda wanted – she was trying to get them all to turn on each other. Simon storms off and heads to Miranda’s office and hands her a piece of paper, he says it is for the “better good” of everyone in the class. He submitted his votes. The rest of the class is furious when they learn that Simon turned against them and voted – even though they were taking a stance and not voting. To Alex’s dismay, everyone caves and agrees with Simon and gets ready to submit their votes. Miranda interrupts, she says that it was all an exercise. She is shocked, no class ever actually decided to vote each other out. They were supposed to remain united. She informs Simon that he is on formal warning, one more mistake and he is out, because he “turned on his people when they needed him the most.”

Present time, Alex is pacing while Simon is searching the military database on his computer. She whines that it has been over an hour. Suddenly, Simon starts laughing and an alarm system goes off in the house. Alex pulls her gun frantically and Simon taunts “Sorry Alex.” Simon says that he had to alert the authorities so that he doesn’t get in trouble for helping her – but he promises to help her get away.

Fast forward to present time, Miranda is still in custody and she sees agents taking Alex’s mom in to the bathroom. She lies and says she needs to use the bathroom too, and she locks herself in the bathroom with Sita. Miranda tells her that she knows Alex is innocent and she needs to stand by her daughter right now. Alex’s blood is all that she has left – if her own mother turns on her it will destroy her. Liam takes Sit back in the bathroom, he shows her security video footage of Alex beating up Simon. Sita obviously believes that Alex is a terrorist, she caves and tells Liam that Alex lied to her whole family – she was MIA in India for a year and they have no idea where she was or what she was up to.

Tonight’s episode ends with Shelby and Alex making amends in their dorm room. Afterwards, Alex heads outside and Ryan finds her sitting alone with the FBI file about her dad. Alex confesses that her dad was in the FBI, Alex breaks down crying. Her father was a hero and he saved 100’s of lives – and she shot and killed him, because she thought that he was just a miserable drunk.

Present time – Alex’s mom stands up at a press conference and turns against her own daughter, she says that Alex’s actions can’t be forgiven.