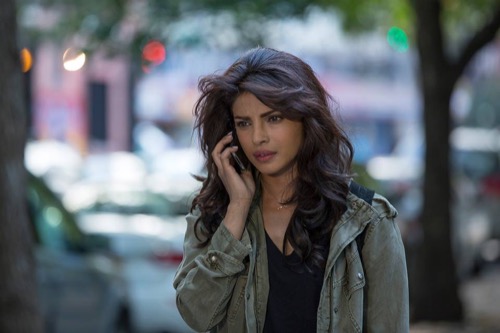 Tonight on ABC Quantico airs with an all new Sunday October 4, season 1 episode 2, called, “America” and we have your weekly recap below. On tonight’s episode Alex (Priyanka Chopra) needs to outwit Liam (Josh Hopkins) and his team in order to get into her apartment to find evidence to clear her name.

On the last episode, the thriller about a possible sleeper agent mixed in among new recruits at the FBI Academy in Quantico, Va., went underway with the arrival of the agents-in-training to the base. Did you watch the last episode? If you missed it we have a full and detailed recap, right here for you.

On tonight’s episode as per the ABC synopsis, “Alex needs to outwit Liam and his team in order to get into her apartment to find evidence to clear her name. Meanwhile, in a flashback, the NATs are tasked with finding potential threats to national security.”

Tonight’s season 1 episode 2 looks like it is going to be awesome so make sure that you tune in to our live coverage of Quantico at 10:00 PM EST!

Tonight’s episode of Quantico kicks off with a flashback of Alex Parrish interviewing for the academy. Apparently, Ryan Booth was recruited at the academy to “keep an eye on Alex.” He knew who she was before they even got to the academy and they met each other on the plane and had sex.

At the academy, Alex, Shelby, and Nimah are heading to class. They are teasing Alexa bout hooking up with Ryan Booth. They spot Ryan outside flirting with Nathalie – Alex insists that she doesn’t care and says that Nathalie can have them. In class, the Quantico students are paired up with a team of analysts for the next 12 weeks. They will be learning how to identify and stop an attack before it happens.

Flash forward to the terrorist attack in New York, Alex Parrish is on the run and they are shutting down the city and searching for her. Alex contacts Liam on the walkie talkie, and he begs her to turn herself in. She insists that she is innocent – but he reminds her that they found Ryan Booth bleeding out on her apartment floor surrounded by plastic explosives. She tells him she only needs one day to prove that she is innocent. Liam tries to keep her talking while his men work on tracing the walkie talkie signal.

In Quantico, Shelby is surprised to see that the analyst that she is paired up with is Haas – she can’t believe that they let him back in to the academy. While they are working with the analysts, Shaw takes Liam aside – she says that Ryan Booth is an undercover agent. But, Liam already knew that, he is his contact. Shaw thinks that the bureau sent Ryan Booth to spy on her, to see how she is doing.

Flash forward – Alex Parrish is on the run. She is wearing her FBI hate and coat still, she barges in to a shop near the explosion. She asks the store owner for access to her security footage from that morning. Meanwhile, Nathalie is processing evidence at Alex’s house – she call Liam and says that there is no way she built an entire bomb in her apartment, there isn’t enough supplies or space. Liam confronts Shaw after she is arrested, Shaw snarks that he is just bitter because he was in love with Alex Parrish.

Back at Quantico, the trainees are presenting the evidence that they found in their fake cases to the analysts. Alex is arguing with Nathalie and Ryan about their case – she is certain that they missed something. It turns out Alex was right, and they failed the project. They wound up “exposing” themselves an FBI agents – and if it were real life their covers would have all been blown.

Flash Forward to NY: Alex creates a diversion and plants her walkie talkie on a random guy. All of the FBI agents rush out of her apartment because they think she is at a different location. Once they are gone, Alex runs inside of her own apartment where they are processing evidence. While Alex is inside – Nathalie returns, they wind up in a huge fight. Alex runs and locks herself in the bathroom. She notices a crack in the cupboard wall and kicks the wall in and runs in to the next apartment. She is shocked when she realizes that someone has been staying in the apartment and it is full of packages with her name on them.

Nathalie breaks through the wall and Alex makes a run for it – she chases Alex as she hops from roof to roof through NYC. Finally, Nathalie catches up to her. Alex wrestles her down and handcuffs her to a pole and steals her gun before she runs off. The entire time Alex tries to explain to Nathalie that she is innocent – but Nathalie isn’t buying it.

In Quantico, Alex heads back to her room and Ryan Booth is waiting for her. He comes clean, he says that she was right about him – he says that he was married for three years and it didn’t work out. He tells her where he “really was” before he came to Quantico. The thing is, he still didn’t tell her the real truth – that he is undercover and spying on her.

Ryan Booth wakes up in the hospital, they were able to save him after they found him in Alex’s apartment. The nurse gives him his phone and says it has been ringing off the hook. He takes the phone and calls Alex. She demands to know what he was doing in her apartment – he says that he just visited her to apologize for what happened back in Quantico. Ryan says it was dark someone opened the door and shot him – he didn’t see the shooter. He says that he will help her, and buy her some time – but in order to do that he is going to have to make her seem guilty. Liam arrives at the hospital, and Ryan quickly hangs up.