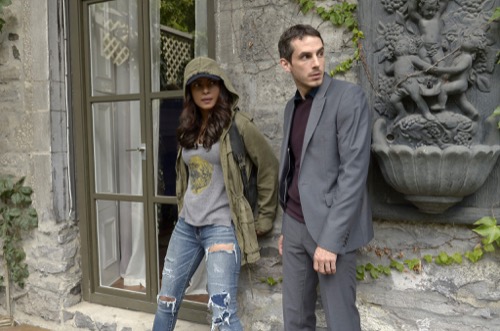 Tonight on ABC Quantico airs with an all new Sunday October 18, season 1 episode 4, called, “Kill” and we have your weekly recap below. On tonight’s episode at Quantico, the recruits take part in a hostage rescue training exercise that leaves Alex (Priyanka Chopra) questioning whether she should quit.

On the last episode, at Quantico, Alex learned of her father’s FBI past; and, in the future, Liam asked Alex’s mother to take part in a televised press conference geared to getting Alex to turn herself in. In other events, at Quantico, the NATS learned the art of profiling and focus on their classmates’ strengths and weaknesses. Did you watch the last episode? If you missed it we have a full and detailed recap, right here for you.

On tonight’s episode as per the ABC synopsis, “at Quantico, the recruits take part in a hostage rescue training exercise that leaves Alex questioning whether she should quit; and, in the future, she finds possible evidence that seems to point to one of her closest classmates.”

Tonight’s season 1 episode 4 looks like it is going to be awesome so make sure that you tune in to our live coverage of Quantico at 10:00 PM EST!

Tonight’s episode of Quantico kicks off with a flashback of Alex Parrish’s parents Michael and Sita fighting over a gun on the floor. While they are wrestling, Alex runs in to the room and picks up the gun and shoots and kills her own father. It’s all a bad dream – Alex wakes up in Quantico, they are being woken up for a pre-dawn gun test.

Fast forward to present time, Alex is on the rush. Simon finds her hard at work, she hasn’t been to bed yet – she has built an entire bulleting board with all of the Quanitco students faces. Simon gets a phone call and says it is his work, its actually his handler at the FBI. They tell him that there are agents en route to pick up Alex, he has to keep her busy until they arrive. Simon begs them to give him tie, Alex trusts him, he thinks that he can get her to talk.

Back at Quantico, Liam takes Booth aside and tells him that his mission to keep his eyes on Alex is over. They don’t think that she is a good match for the FBI. Ryan can go home as soon as he convinces Alex to drop out of the academy. Ryan argues that it’s ridiculous, Alex is at the top of her class – how is he supposed to convince her to leave the academy.

At the bomb site, Ryan is out of the hospital – he runs in to Vasquez. He reassures her that nothing is going on with him and Alex – it was just a one time thing between them, Vasquez isn’t convinced because he was at her apartment at 6 in the morning.

Liam tells Ryan that they are about to arrest Alex – he sees the agents live feeds of Simon’s house and realizes that Simon has been working with the FBI all along and is setting Alex up. He texts Simon and demands to know what he is doing. At the last minute Simon has a change of heart and he rushes Alex out the back door of his house before the FBI agents arrive to arrest her.

Flashback to Quantico, the students are doing a shooting house drill – they rush in to a staged house and have to eliminate all of the threats without injuring any of the hostages. Of course, Vasquez taunts Shelby and Alex about how much better she is at shooting than them. Alex goes crazy when she gets inside the house, she ditches Shelby and “kills” all of the targets by herself. Afterward she snarks to Shelly that she didn’t need her team, she can handle herself.

Next, they send them in to a staged bank robbery. While they are getting strapped up, Shelby takes Ryan aside – she is worried about Alex and the way she has been acting. Ryan slips up and says that Alex shot and killed her father, he thought that Shelby already knew.

Present time – Simon and Alex are on the move, he is taking her to meet his “bomb maker friend” to get information on the wires that she found at the scene of the crime. He analyzes the wire and says that there is only one company that manufactures those wires. It’s the company that her old roommate at Quanitco, Shelby, secretly owned – Alex recognizes the name instantly.