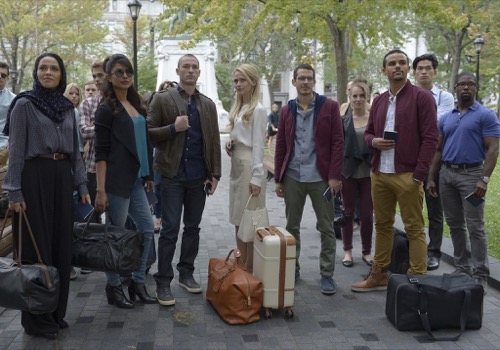 Tonight on ABC Quantico airs with an all new Sunday October 25, season 1 episode 5, called, “Found” and we have your weekly recap below. On tonight’s episode at Quantico, the trainees leave campus for the first time while on an undercover assignment.

On the last episode, at Quantico, the recruited took part in a hostage rescue training exercise that left Alex questioning whether she should quit; and, in the future, she found possible evidence that seemed to point to one of her closest classmates. Did you watch the last episode? If you missed it we have a full and detailed recap, right here for you.

On tonight’s episode as per the ABC synopsis, “the trainees leave campus for the first time while on an undercover assignment; and Alex and Ryan become closer. In the future, Alex decides to share her side of the story and, to that end, sits down for a TV interview.”

Tonight’s season 1 episode 5 looks like it is going to be awesome so make sure that you tune in to our live coverage of Quantico at 10:00 PM EST!

Tonight’s episode of Quantico kicks off with Alex Parrish and her former roommate Shelby – Alex has taken her hostage. Alex is convinced that Shelby was trying to frame her, the wire she found in her apartment was linked to Shelby’s family business, Alex insists that she is innocent. Shelby points out that innocent people don’t other people hostage and handcuff them to poles. Ryan calls Alex and warns her that the FBI put a “shoot on sight” order out on her, they aren’t just trying to arrest her, they have orders to kill her.

Flashback to Quantico, after training – Ryan flirts with Alex. He says that he wants to take her to a diner nearby, but they are forbidden from leaving the academy. They head to class and Miranda gives them their new task – they are going undercover and they are all required to create a fake fortune 500 business character. Whoever wins the competition, will get to go out in real life and see if people fall for the fake persona that they have created.

Simon and Ryan are still at the bomb site at Grand Central Station – they are working hard to try and find the real bomber because they know that Alex is losing hope. Meanwhile, Alex comes up with a plan – she decides to go online and “tell her story” to the public, since the media has dubbed her “Jihady Jane.” She thinks that if she convinces the public she is innocent, the FBI won’t be able to kill her on sight, because they won’t want to deal with the backlash. Alex contacts the hacker group “Anonymous” – she wants their help broadcasting a video that the FBI can’t trace to her location.

Flashback to Quantico – Alex and her classmates are getting to work creating their fake personas. Alex decides that she wants to be a lawyer, because she is really good at arguing. Liam gives them some pointers on selling their fake characters. He quizzes them all for hours, and then they head out to the “real world.” Liam takes them to a fortune 500 conference – their mission is to network their way to a 1-on-1 meeting with Norman Reed.

The students begin mingling at the mixer. The twins are bickering with each other, meanwhile Simone sneaks in a fake boyfriend named Max to try and prove to the other skeptics at Quantico that he really does have a boyfriend. Caleb is following Shelby around and sabotaging her, he thinks that she ratted him out at the gun range earlier. Miranda takes Liam aside at the bar and demands to know why he has Ryan spying on Alex. Liam reveals that Alex has “something on all of them,” and he promises to tell her everything if she buys him a drink.

Alex and Shelby meet up with some members of Anonymous. They quiz her first to make sure that she is really innocent before they agree to go live with her interview. Back at headquarters, Liam gets intel that Alex is preparing to go live with Anonymous – he tells his team to get ready. If she is live for more than five minutes, then they will be able to get through some of the firewalls and track her to her location.

Alex goes live and says that someone from Quantico “framed the brown girl.” She was an easy target because of her nationality and the fact that she has spent time in other countries. Alex vows that she loves this country, and if it were up to the FBI – she would be dead already. She prays that the FBI thinks twice about silencing her before the truth comes out.

Flashback to Quantico, Elias tracks down Simon’s fake boyfriend Max. he learns that he and Max aren’t really dating. Downstairs at the convention, Shelby freaks out on Caleb – she has had enough of him sabotaging her. She drags him in to an empty room and they start shouting at each other and then wind up ripping each other’s clothes off and hooking up. Meanwhile, Alex, Ryan, and Nimah win the challenge and get to meet the CEO.

While Alex is broadcasting, the FBI manages to track the signal and rush to her location. They roll up with their troops and jump out with their guns drawn. Alex planned ahead though, she is in the basement of a chapel – and it is Ramadan. Ryan and Simon arrive, Ryan points out to Liam that this is a PR nightmare. While Liam is arguing with the priest news crews arrive, and then hundreds of people leave the chapel with their faces covered and they can’t do anything about it. Alex gets away – but she leaves Shelby in the basement. Anonymous helps Alex check in to a hotel under a fake name, they give her an encrypted cell phone and laptop that she can use before they leave.

Flashback to Quantico – Simon heads up to Max’s hotel room, and finds Elias sitting in there. His scheme is up. Elias rants that he knows Simon is dangerous and he is going to make sure that he never sets foot in Quantico again. Alex and Ryan are up on the roof alone, drinking – one thing leads to another and they wind up sleeping together, again. The next morning, they had back to camp – Simon pays Elias a visit. He confesses to him that he was in the Israeli Defense Forces, and he did horrible things that haunt him every day of his life. When he got back, he went undercover to help him cope with himself. He made his entire life a lie – he doesn’t wear glasses, he is not gay, and he doesn’t even like coffee. Simon breaks down in tears, and he and Elias make amends.

Tonight’s episode ends with Miranda telling Ryan that Liam wasn’t lying, and Alex is a threat to National Security. Meanwhile, Liam is debriefing Shelby – she doesn’t tell Liam that Ryan and Simon are secretly helping Alex. Afterwards, Shelby tells Ryan and Simon that they are right – she doesn’t think that Alex did it. Simon gets a text message and learns that they weren’t the only ones in NY during the bombing – Caleb was there too, he might be the bomber.