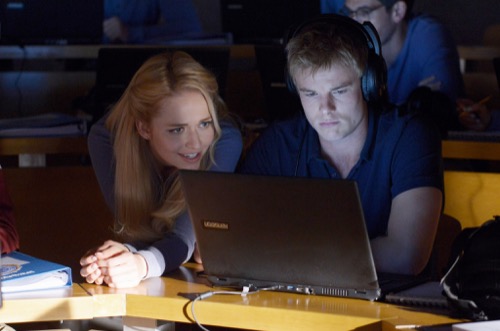 Tonight on ABC Quantico airs with an all new Sunday November 1, season 1 episode 6, called, “God” and we have your weekly recap below. On tonight’s episode at Quantico, the NATs practice surveillance on Miranda (Aunjanue Ellis) and her son; Shelby (Johanna Braddy)  tries to keep her distance from Caleb. (Graham Rogers)

On the last episode, the trainees left campus for the first time while on an undercover assignment; and Alex and Ryan became closer. In the future, Alex decided to share her side of the story and, to that end, sat down for a TV interview. Did you watch the last episode? If you missed it we have a full and detailed recap, right here for you.

On tonight’s episode as per the ABC synopsis, “the NATs practice surveillance on Miranda and her son; Shelby tries to keep her distance from Caleb; Raina opens the door to a closer relationship with Simon; and, in the future, Alex is helped with her effort to hack into an FBI computer.”

Tonight’s season 1 episode 6 looks like it is going to be awesome so make sure that you tune in to our live coverage of Quantico at 10:00 PM EST!

Tonight’s episode of Quantico kicks off with Alex and Shelby watching the news – Shelby has agreed to help her prove that she is innocent. The news anchor is sharing a photo that was snapped of Alex carrying a box right before the bombing – they got it off from a social media page.

Alex whines that all that was in the box was flapjacks, not a bomb detonator. Alex is certain that Caleb is the bomber – she needs Shelby’s help to prove it though since she knows more about Caleb than anyone else. Alex calls Ryan and wakes him up, he’s in bed with Vasquez. Alex tells Ryan to check the social media accounts that the FBI is going through for pictures of Caleb – not her.

Flashback to Quantico: Miranda hasn’t been to work in nearly a week. Liam heads to her house to check in on her. Her son Charlies just got out of prison, after he threatened to go on a shooting rampage at a school. Miranda is scared to leave him alone, she is scared of what he might do while she is at work. Liam tells Miranda that she needs to have some faith in him, and then he might actually speak to her if he thinks that she is giving him space and trusting him.

Present Time: Ryan gets to work and calls Alex – he has bad news. The FBI analyst in charge of searching all of the social media posts the day of the bombing for evidence that Alex is the bombed – is none other than Caleb Haas. And, it is going to be impossible for Ryan to access his projects because Caleb’s Dad Clayton is overlooking him.

Flashback to Quantico: the FBI students are learning how to set up surveillance, and how to use the information they gather to see what the person they are watching is really like. Meanwhile, Alex and Shelby are teasing each other about hooking up with Caleb and Ryan.

They all head back to class where they are “watching” a fake couple named Edgar and Julia. Back in class, Vasquez realizes that Shelby is hooking up with Caleb. Vasquez says that Shelby is going out with another guy, she encourages Caleb to find out who it is and “take him out.” Ryan and Alex are working together,

It’s time for the students’ next surveillance assignment – Miranda tells the students that now they have to run surveillance on her. She teases that she has something planned, and if they don’t keep an eye on her then they will be tapped out. The students are obviously thrown off by their new assignment.

Present Time: Caleb gets to work analyzing the surveillance video and images and videos from social media – and Alex has hacked in to his computer so that she can see everything that Caleb is seeing, to make sure that he doesn’t cover up his own tracks.

Flashback To Quantico: Alex and Ryan park a van outside of Miranda’s house, they are surprised to see that Miranda is not home – but Liam’s car is parked outside of her house. Meanwhile, Miranda calls Liam and thanks him for keeping an eye on Charles while she was at work. She tells Liam that he can head home, but neglects to say that all of the kids will be doing surveillance on her house.

Present Time: Alex has been watching Caleb rewind through hours of footage, finally he deletes something. She calls Simon and tells him to create a distraction so that she can hack in to Caleb’s computer and see what he deleted. She is certain that it was proof that he was at the bomb site.

Flashback To Quantico: Liam is leaving Miranda’s house and he finds Ryan snooping around outside the house. Liam has no idea that Miranda gave them an assignment to watch her house and he demands to know what Liam is doing there. Ryan is wearing a wire and Alex can hear their entire conversation – and Liam mentions that Ryan is already and FBI agent and he was assigned to keep an eye on Alex. Alex freaks off and speeds off in the surveillance van.

Shelby gets back to her room, and Caleb is waiting for her – he is furious. He knows that she has been lying, and she isn’t really dating any one else. Caleb scoffs that he knows Shelby thinks she is “too good” for him. Shelby corrects him and tells Caleb that the reason she pushed him away is because she likes him too much and he is starting to distract her from becoming an FBI agent.

Present Time: Alex gets the video that Caleb deleted – it is just him arguing with his father outside of the station. Caleb didn’t have anything to do with the bombing. Then Alex is confused when Shelby meets up with Caleb’s dad afterward and they start kissing. Shelby pleads with Alex to turn the computer off, and Alex puts two and two together…Caleb came to New York because he was trying to figure out who Shelby was having an affair with, and it was his own father!

Flashback to Quantico: Miranda finds her son Charles – he is standing outside the school that he was going to shoot up, they start arguing. Miranda shouts that she wants to trust him, she just is scared that he will make good on his threats before he went to juvie.

Ryan finds Alex – she is furious, for obvious reason. He admits that he started following her before they got to Quantico, and he knew who she was when they hooked up at the airport. Ryan insists that when he took the assignment, he didn’t know anything about her father or why Liam was keeping tabs on her. He reveals that Liam took him off the case as soon as he found out they were sleeping together, and he shouts that he lost his position at the bureau over her and Liam. Alex doesn’t want to hear it, she shouts at him to never speak to her again.

Present Time: Shelby tries to talk to Caleb, but he is devastated after seeing video footage of her cheating on him with his father. Shelby tries to explain herself but there is nothing she can say to make what she did okay. Caleb storms off in tears, after reminding Shelby that his dad is married – to his mother.

Flashback To Quantico: Alex pays Liam a visit, he reassures her that he ended the surveillance on her as soon as he realized that she was such an asset to the FBI.

Tonight’s episode ends with Caleb getting back to work on the surveillance footage – he finds another one of their classmates was also at Grand Central Station … it was one of the twins!