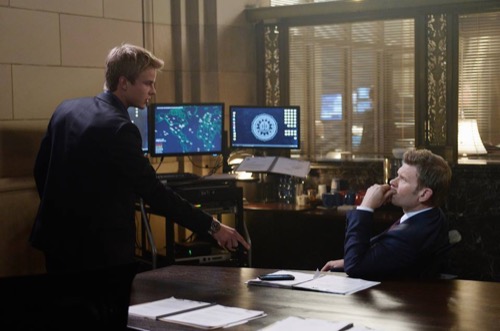 Tonight on ABC Quantico airs with an all new Sunday November 15, season 1 episode 8, called, “Over” and we have your weekly recap below. On tonight’s episode, in the future, a hack of the FBI computer system causes confidential information to become public; and Alex (Priyanka Chopra) realizes that a second bomb is in NYC.

On the last episode, the NATS faced an explosive assignment for their midterm. In the future, as Alex continued to try and clear her name, Nimah and Raina provided her with more questions than answers. Did you watch the last episode? If you missed it we have a full and detailed recap, right here for you.

On tonight’s episode as per the ABC synopsis, “in the future, a hack of the FBI computer system causes confidential information to become public; and Alex realizes that a second bomb is in NYC. In other events, at Quantico, the NATs receive individual assignments that are actually connected.”

Tonight’s season 1 episode 8 looks like it is going to be awesome so make sure that you tune in to our live coverage of Quantico at 10:00 PM EST!

Tonight’s episode of Quantico kicks off where we left off last week – Alex and Ryan are on the run now and Ryan is injured. Liam and the FBI are closing in on them, they just raided the house where they were hiding out. Alex and Ryan run in to another house, and Ryan tells her that she is going to have to perform “field surgery” – because he was just shot, again.

Flashback to Quantico – the class is whiddling down, there has been another round of cuts. Now, they are allowed to leave campus. They head to class with Miranda and she announces that they are all getting their very first case to work on. The twins are still working a case together though – it’s a jewelry theft. Caleb is stuck with a cyber crime. Ironically, Alex’s case is a bomb threat.

Present – Shelby and Simon are arrested by Liam and his men and brought back to central station. Caleb’s dad is furious when he sees that Shelby is involved. She tries to explain that Alex is innocent, but he doesn’t want to hear it. Caleb’s dad goes live in a press conference – and the computer screens behind him start going crazy. The FBI was hacked – and someone leaked the entire grand central station files on to the internet. Alex gets the bullet out of Ryan, and then she gets on the computer and realizes that someone just hacked the FBI and gave her everything that she needs to clear her name once and for all.

Alex calls her hacker friends Mia and Duncan for help, she begs them to help her look through the FBI’s files and find something to clear her name. Meanwhile, the FBI is scrambling – Caleb’s dad asks Caleb to help him cover his tracks and hide his affair with Shelby. He is scared that the hackers are going to leak his emails too and reveal he was having an affair. Caleb agrees to clear the emails, and his dad orders him to delete Shelby’s emails too – he gives Caleb Shelby’s passwords.

Flashback To Quantico – Ryan takes Alex aside, he dug up some dirt on Liam. Apparently Alex’s dad was Liam’s boss in 1993. But, then Liam put in an immediate transfer request, and no one knew why. Alex decides that she and Ryan are going to have to go talk to her mom about it, if anyone knows what really happened it would be her mom. Alex can’t believe that Liam lied about knowing her dad this entire time. Meanwhile, all of the students are working their cases and they realize that they are all connected, and all cases lead back to Washington DC.

Alex and Ryan sneak in to the records office, they find a case file on Alex’s mom – apparently she was questioned about her relationship with Alex’s dad and the FBI thought she had links to the Pakistani Intelligence. Alex steals the file on her mom and they rush back to class. In class, Miranda gives them their next assignment, they have to go out and capture an assailant that has Ebola and is planning on spreading it.

Present Time – Alex and Ryan are going through the files with the hackers, they find a receipt in Alex’s name for supplies used to buy stuff to make a bomb. They realize that those supplies weren’t used in the Grand Central Station bomb – and there is another bomb out there. Meanwhile, back at FBI headquarters, Caleb makes an interesting discovery in his dad’s email. Apparently, someone alerted his dad BEFORE the bombing that someone was using Alex Parrish’s badge, and it wasn’t her.

Meanwhile, the hackers are trying to convince Alex to leave the country – they have a car and a plane set up for her. Alex doesn’t want to leave. She is afraid that if she leaves the country she won’t be able to clear her name. Ryan tries to convince Alex that it is the best thing for her to do right now. Back at the FBI headquarters – Caleb is freaking out, his dad tried to delete the email that would clear Alex’s name. Luckily, Caleb kept a copy of it.

Flashback to Quantico – Liam stole the file back from Alex about her dad and him working together. Liam admits that he worked with Alex’s dad, they went undercover with a militia. There was a terrorist attack and Liam and Alex’s dad misread the target – they wound up being responsible for hundreds of deaths, and then they covered it up so that they didn’t lose their jobs at the FBI.

Caleb and Shelby wind up in a huge fight – he got her in trouble for sending money to her sister in Saudi Arabia, the FBI thought that it was terrorism related. Shelby can’t believe that Caleb violated her trust, Caleb confesses that he has a secret too – he admits that his father had to save him when he was 17 years old because he joined a cult.
Present Time – Alex and Ryan arrive at the airport, Ryan is in bad shape. Alex puts Ryan in to the plane, she lies to him and tells him that she left his medicine in the car. She shuts the door to the plane and motions for the pilot to take off. Alex tricked Ryan, she is sending him out of the country to be safe, but she is not leaving until she is able to clear her name.

Flashback to Quantico – Alex pays Miranda a visit, Miranda confirms that Liam was telling the truth about the cover-up with her father. While they are talking, Miranda gets a phone call and rushes out of the room. It’s her neighbor – she calls to let Miranda know that there is someone on her roof. Alex finds Miranda upstairs and she is covered in blood, she tells Alex that it was Charlie.

Present Time – Tonight’s episode ends with Alex marching in to Grand Central station, FBI agents rush her and pin her on the ground. She warns them that that there is another bomb in NYC.