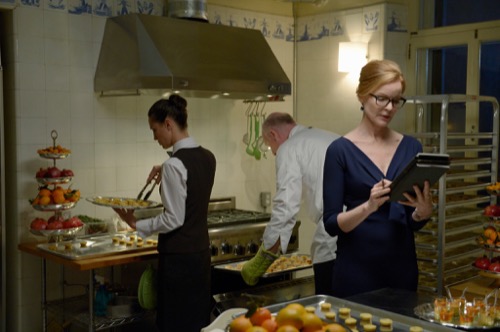 Tonight on ABC Quantico airs with an all new Sunday December 13, season 1 fall finale called, “Inside” and we have your weekly recap below. On tonight’s episode, the terrorists behind the Grand Central Station bombing reveal themselves.

The series follows a group of young FBI recruits; each has a specific reason for joining. Flashbacks detail their previous lives, while the recruits battle their way through training at the academy in Quantico, Virginia. However, the series reveals in a flash forward twist that one of the recruits, upon graduating from the academy, will be suspected of masterminding the biggest terror attack on New York City since the September 11 attacks in 2001.

On the last episode, at Quantico, an emergency disciplinary hearing caused deep secrets to be spilled, while in the future Alex worked covertly with her team to find the real bomber before her time ran out. Did you watch the last episode? If you missed it we have a full and detailed recap, right here for you.

On tonight’s episode as per the ABC synopsis, “the terrorists responsible for the bombing of Grand Central Station finally reveal themselves, but instead of answers, more questions remain. While back at Quantico, the recruits receive a well-deserved few days off for the holidays, but not everyone is oh so merry when secrets are revealed and lines and blurred.”

Tonight’s season 1 episode 11 looks like it is going to be awesome so make sure that you tune in to our live coverage of Quantico at 10:00 PM EST!

Alex and her friends were given a nearly impossible task towards the end of their careers at Quantico. Apparently before they were hunting actual terrorists and trying to find a way to clear Alex’s name, they were just freshmen with vacation homework. And as it turns out that’s an area the Bureau excels in.

Pending Inactive cases better known as cold cases are literally the bane of agents across the world. Yet just before they were all supposed to leave on their Christmas to New Year break, Miranda decided to hand them all a bunch of pending in active cases for them to pursue at their own leisure.

She said that in the Bureau there was no such thing as a cold case hence the new name which meant in its own way that all cases remained open until it was officially closed with an arrest.

And, well, no one was going to bother with this homework because they were going to be home for the holidays. However a few of them stayed back at Quantico seeing as they dreaded going home and those few just decided to look over the cases together. So Alex, Shelby, Nimah and Natalie were reviewing cases and when they weren’t getting anywhere – they began to turn the holidays into a drinking contest amongst themselves.

But Caleb kind of put a stop to that. His parents had blinded him with a black-tie party at the mansion and he needed a date. Therefore he invited Shelby and Alex as well as Shelby to come with him. And Nimah stayed back to keep the party going with Miranda who also didn’t have a place to go for the holidays.

As for the party, though, that proved to be not the best of ideas. For while the party in itself gave the ladies a chance to dress up and make some great contacts in the bureau, it also brought them face to face to a few people they wished they hadn’t run into. Like Ryan for instance.

Ryan had been giving Alex the space she said she needed but at one point she had caved. She had called him and had overheard a very girlfriend voice ask him “who was it”. So that put Alex in a mood and her friends then tried to cheer her up by saying it simply could have been one of his sisters. Only when Alex called – she overheard Ryan’s phone at the party.

He had been on the arm of Hannah Wyland and Hannah was a woman that Alex had just been admiring. Nevermind the gigantic ring on Hannah’s ring finger.

But surprisingly Ryan had an explanation for all of it. He said he was undercover with Hannah and that they were only pretending to be married. And once he got that part over that’s when he admitted to actually having been married to Hannah in the past.

Though apparently they’ve become good friends since the divorce and that’s why they got partnered together. And Hannah did come across as a good friend. Especially when she warned Alex away because she felt Ryan deserved someone who wasn’t going to break his heart in the end.

So the party really was a bad decision. Natalie had gotten into an argument while she was there and Shelby ended up seeing a very ugly side to the Haas family. Caleb’s mother had told his father that she was ready to give their marriage another try when the truth was she simply needed him in order to run for Vice-President on a family values platform. And therefore it came as shock when their son told his dad the truth (in front of Shelby by the way).

The entire incident made Caleb seem callous, Senator Haas seem cold, and his dad look like a victim. And so Shelby later broke up with Caleb. She said she finally saw him for what he was and that he was destructive to be around.

And towards the end of the holiday, Miranda’s son finally came back. Though he was suffering from severe injuries. So what happened to Charlie is something that is just going to have to wait until the season picks back up again in March.

But fast-forward to the day of the second bomb and we found out that Elias hadn’t been part of the part from Day 1. In fact he had been recruited a couple of days ago after he his life had been threatened. Yet while it was the plan to set up Simon, Alex chose to side with Simon when it really mattered and the two worked together to figure out where the second bomb was.

And there was a bomb in the basement of the Democratic National Convention event. However that had been a decoy and a third bomb had gone off. Thereby destroying the Command Center the Bureau had taken over.