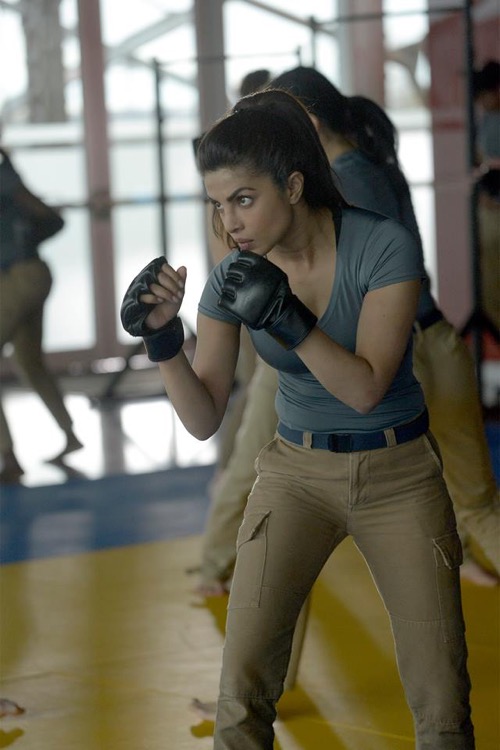 Tonight on ABC Quantico airs with an all new Sunday December 6, season 1 episode 10 called, “Quantico” and we have your weekly recap below. On tonight’s episode secrets are revealed during an emergency disciplinary hearing at Quantico; and, in the future, Alex (Priyanka Chopra) covertly works with her team to find the real bomber.

The series follows a group of young FBI recruits; each has a specific reason for joining. Flashbacks detail their previous lives, while the recruits battle their way through training at the academy in Quantico, Virginia. However, the series reveals in a flash forward twist that one of the recruits, upon graduating from the academy, will be suspected of masterminding the biggest terror attack on New York City since the September 11 attacks in 2001.

On the last episode, the trainees attended a class with a former agent and profiler who tasked them with studying serial killer cases in order to find a victim who didn’t fit with the others; and, in the future, Alex was interrogated by an FBI team while Ryan’s life hanged in the balance. Did you watch the last episode? If you missed it we have a full and detailed recap, right here for you.

On tonight’s episode as per the ABC synopsis, “at Quantico, an emergency disciplinary hearing causes deep secrets to be spilled, while in the future Alex works covertly with her team to find the real bomber before her time runs out.”

Tonight’s season 1 episode 10 looks like it is going to be awesome so make sure that you tune in to our live coverage of Quantico at 10:00 PM EST!

Tonight’s episode of Quantico kicks off outside of the federal courthouse, Alex Parrish has just “pled guilty” to the bombing, the press is going crazy outside. Alex is rushed in to a van in hand cuffs – it is all an act, Liam convinced her to fake pleading guilty to convince the terrorist that they successfully framed Alex.

Alex heads back to the FBI office, they brief Simon, Neema, Rayna, and Shelby on the plan. They have 24 hours to investigate their entire class from Quantico to try and find the bombed before they strike again.

Flashback to Quantico – the class is in the gym, working on their self-defense tactics. Nathalie, Ryan, and Alex are paired up with each other. Shelby is fighting Caleb and Brandon – but they are scared to hurt her. Shelby freaks out because she is tired of them treating her like a girl.

Shelby can tell that something is off with Caleb – she confesses to Alex that she thinks that Caleb is going to dump her. In the boy’s locker room Caleb calls his dad. He begs him to leave Shelby alone and promises to find proof that her sister is real.

Alex notices something strange with Nathalie in the locker room. It looks like the scar behind her ear is peeling off – she confronts her and wants to know if it is fake. Nathalie tells her to mind her own business. Alex tells Ryan that something is “off” with Nathalie and tells him about the fake scar, Ryan agrees to look in to it.

Present – Alex and her classmates are working hard with Liam ad Miranda to get surveillance on all of the other students that were at Quantico with them. They have eyes on all of them. Miranda and Liam take Alex aside and tell her that she needs to keep an eye on Simon, Shelby, and the twis too.

They are going to “put eyes on them.” Alex argues that they have earned her trust – but Miranda and Liam tell her that she can’t trust anyone right now, and the person that framed her might be one of the people closest to her.

Flashback to Quantico – their final mission at school is to go through background checks of a new class coming in to replace them, and try to find what they are hiding and to make the final cuts. Meanwhile, Caleb is on a mission to find proof that Shelby’s sister is real. He sneaks in to her dorm room to look through her laptop. Shelby walks in and catches him – he swears that he is trying to help her.

Ryan gets Alex a copy of Nathalie’s file – there is nothing in there about her scar. But, there is something strange in her file about a restraining order she has against a drug dealer named Edgar Beltran. Nathalie catches them reading her file and freaks out. While they are arguing, Liam marches in an says that they have an emergency meeting for the Candidacy Review Board – something happened.

Present – Miranda, Liam, and Alex are watching the surveillance footage. They overheard Shelby on the phone, with Clayton (Caleb’s dad) – Miranda is shocked, Shelby’s secret affair is out. Meanwhile, Raina visits Hamza in the hospital, he is the terrorist of the cell that they were infiltrating.

They look in on the surveillance footage of Simon, he is meeting a man at the park. Alex zooms in on the man and recognizes him and freaks out, she tells Miranda “That man Simon is meeting makes bombs.”

Flashback to Quantico – they are waiting for the emergency meeting to start. Caleb is trying to explain to Shelby that he was trying to find proof for his dad that her sister is real. He doesn’t want his dad to come after her. Miranda arrives at the meeting and calls Natalie up front – she knows about her fake scar. She orders Natalie to explain herself in front of the entire class.

Natalie cries that she faked the scar before she got in the FBI, she lie in family court and said that her ex-boyfriend Eddie did it to her so that they couldn’t get custody of her daughter because he was a bad man. Neema stands up and interrupts, she says that Natalie is innocent and if anyone should be up front it is Simon, because he is a “war criminal.”

Present – Alex explains to Miranda that the man meeting with Simon is named Oren Shelef, he is an explosives expert and Simon met him at the IDF. Simon makes the FBI agents and can tell that he is being watched. He and Oren leave the park before the FBI agents are able to pick them up. They send units out to Simon’s house to look for him.

Meanwhile, Shelby, Natalie, Caleb, Neema, Rayna all barge in and they demand to know why they are still under surveillance. They thought that Alex trusted them and knew they were innocent. While they are all arguing…Simon marches in. He announces that he is “The one that planned Grand Central.” Everyone stops talking and stares at him in disbelief.

Simon explained that he planned a political act – when he was at Quantico – after everyone turned against him. He never was going to actually use it, but he had the bomb plans all written out. Someone must have stolen the plans from him at Quantico, because as soon as the bomb went off at Grand Central, he recognized the layout and procedure.

Flashback to Quantico – Neema reveals to the class that when Simon was in Gaza, he fought with the Israeli Army, and he killed innocent civilians. Simon insisted that he was just a translator, but one day he had to help his platoon leader. He sent Simon in to lure women out so they could question them – Simone breaks down crying and explains that his platoon leader went rogue and he was hurting the women.

Present – Simon swears that he is not responsible for Grand Central, he is not a murderer, someone stole his plans and set the bombs off. Simon announces that he is going home to get his affairs in order, before he is arrested for treason.

He blames Alex – he never would have gotten in trouble if she wasn’t having him followed. Shelby stands up and curses Alex out, she cant believe that they all risked their lives and careers to help Alex, and she turned on them and spied on them after everything that they did for her.

Flashback to Quantico – Miranda takes Simon in to her office, she tells him that if he can’t control his anger, then he is not going to be able to serve for the FBI. Caleb heads to his dorm room and video calls Shelby’s sister, he says that he has been watching her every move and knows that she is conning Shelby.

He promises not to tell her, as long as she cuts her in on some of the money she is scamming from Shelby. Shelby listens in on the conversation and begins sobbing when she realizes that her “sister” lied to her and they aren’t actually sisters.

Alex learns that Simon was kicked out of Quantico – she rushes to say goodbye to him. He tells her that he is going to disappear. He stops by the twins room, Neema slams the door in his face.

Present – Alex is in the office all by herself watching the surveillance footage. Liam tells her to get some rest. Alex says that she has lost everything, she will be sentenced tomorrow for a crime she didn’t commit, all of her friends abandoned her, and she has no clues as to who framed her. Alex pays Simon a visit at his house. She tells him that tomorrow she might be in jail for the rest of her life – and she needs him to help her clear her name.

Simon tells her that they can never go back to being the Optimistic people that they were back in Quantico, he heads inside and leaves Alex. She holds back tears as she leaves. Someone is waiting for Simon inside his house, they grab him from behind and drug him with chloroform.