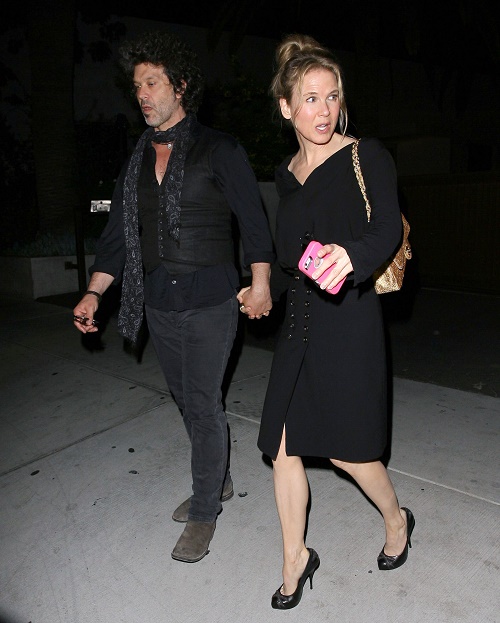 Renee Zellweger is getting married! The actress and longtime boyfriend Doyle Bramhall take great lengths to keep their relationship out of the public eye, but according to sources, they are planning a wedding and preparing to say “I Do.” The happy couple were spotted out and about in Los Angeles this week, and they were wearing matching outfits! Paparazzi snapped some photos of Renee and Doyle as they were picking their car up from the valet at a garage – the couple even shared a kiss in front of the photogs before heading home, which is totally out of character for the normally private celebs.

According to an exclusive source, Renee Zellwegger and boyfriend Doyle Bramhall are in a good place in their relationship, and discreetly planning a wedding. The insider explained to CDL, “With these outfits and PDA, both Renee and Doyle are communicating to the outside world that they are a very serious item. They are both totally comfortable with themselves and with each other. It won’t be long till they tie the knot.”

The last time Renee Zellwegger made headlines was in October 2014 when she stepped out for a red carpet event and shocked the internet with her “new face,” and found herself caught up in a major plastic surgery scandal. Although Renee denied having work done, no one was buying it. In an interview after the plastic surgery scandal, Zellwegger gushed in an interview that the reason she looked so different than the woman the media remembered is because she was “making a home, loving someone, learning new things, growing as a creative person and finally growing into myself.”

Well, it sounds like Doyle is happy with the home that Renee made for the two of them – and he must have popped the question. Considering how private Zellwegger and Bramhall are, the couple will probably slip off and have a private wedding ceremony and sneak right under our radar. What do you think of Renee and Doyle tying the knot and getting married? Do you think they are in it for the long haul? Let us know what you think in the comments below!